This suggests that only eighteen political parties survived the deregistration process.

The commission carried out a review of the performance of political parties after the 2019 general elections to see which parties qualify to exists.

The Chairman of INEC, Professor Mahmood Yakubu, disclosed this while briefing newsmen in Abuja on Thursday.

Although a total of 75 parties were listed for deregistration, one of them – Action People’s Party (APP) – obtained a court order restraining the electoral umpire from deregistering it.

Some of the popular parties affected include KOWA Party; the National Conscience Party (NCP) which was founded by the late Chief Gani Fawehinmi (SAN); Alliance for New Nigeria (ANN) under which Fela Durotoye ran for president in 2019 and Modern Democratic Party (MDP) the party with the youngest National Chairman, Bukunyi Olateru-Olagbegi. It was under the MDP that popular Nigerian music artiste and celebrity Bankole ‘Banky W’ Wellington made his 2019 run for a Federal House of Representatives seat in Lagos.

Here is the full list of the 18 political parties that scaled the deregistration process: 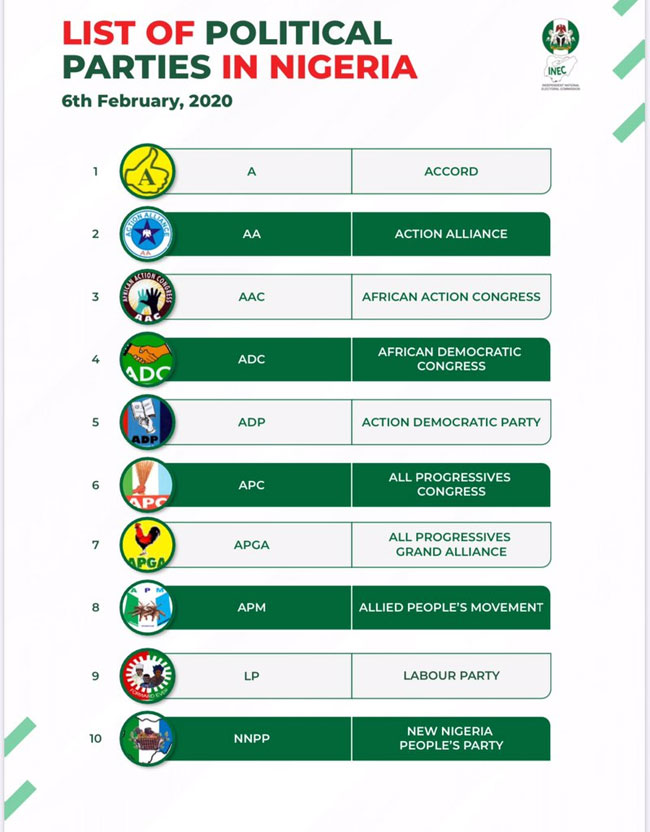 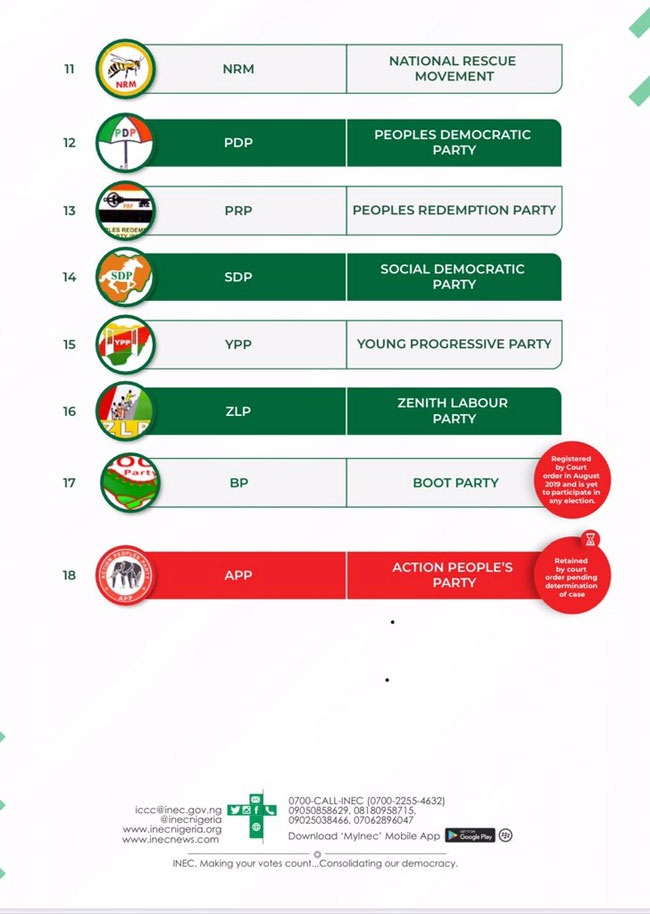 Read the full briefing by the INEC boss below:

MEDIA BRIEFING BY THE CHAIRMAN, INDEPENDENT NATIONAL ELECTORAL COMMISSION (INEC), PROFESSOR MAHMOOD YAKUBU, ON THE STATUS OF POLITICAL PARTIES AND CONDUCT OF SOME OFF-SEASON AND BYE-ELECTIONS HELD AT THE CONFERENCE ROOM, INEC HEADQUARTERS, ABUJA, ON THURSDAY 6TH FEBRUARY 2020

Senior officials of the Commission

On behalf of the Independent National Electoral Commission (INEC), I warmly welcome you to this briefing. The purpose is to convey to Nigerians the decision of the Commission on the status of political parties.

Similarly, the Commission has fixed the dates for the end-of-tenure Governorship elections in Edo and Ondo States as well as bye-elections to fill vacancies in some States of the Federation.

Prior to the Fourth Alteration, the Electoral Act 2010 (as amended) had provided for the deregistration of political parties. Based on this provision, the Commission, between 2011 and 2013, deregistered 39 political parties.

However, several of the parties challenged the power of INEC to deregister them, particularly on the ground that the Electoral Act is inferior to the Constitution and that deregistration infringed their fundamental rights under the same Constitution.

Subsequently, the courts ordered the Commission to reinstate the parties. It was for this reason that the National Assembly amended the Constitution to empower the Commission to deregister political parties on the following grounds:

Breach of any of the requirements for registration as a political party.

In order to implement the provision of the Fourth Alteration to the Constitution, the Commission carried out an assessment of political parties to determine compliance with the requirements for their registration.

Similarly, following the conclusion of the 2019 general election, including court-ordered re-run elections arising from litigations, the Commission was able to determine the performance of political parties in the elections.

In addition, they were also assessed on the basis of their performance in the Area Council elections in the Federal Capital Territory (FCT) which coincided with the 2019 general election.

It should be noted that the FCT is the only part of the country where INEC is empowered by the Constitution to conduct Local Government elections.

Consequently, the Commission has determined that sixteen (16) political parties have fulfilled the requirements for existence based on Section 225A of the 1999 Constitution (as amended) as follows:

Seventy-five (75) political parties did not satisfy the requirements of the Fourth Alteration to the Constitution. However, one of the political parties, the Action Peoples Party (APP), filed a suit in court and obtained an order restraining the Commission from deregistering it. Consequently, the party remains registered pending the determination of the case by the court.

The new political party, Boot Party (BP), registered by court order after the 2019 general election will also continue to exist.

Accordingly, seventy-four (74) political parties are hereby deregistered. With this development, Nigeria now has eighteen (18) registered political parties. The list of the parties will be shared with you at this briefing and will also be available on our website and social media platforms shortly.

The tenure of the Governors of Edo and Ondo States will end on 12th November 2020 and 24th February 2021 respectively. Pursuant to the provisions of Section 178(2) of the 1999 Constitution and Section 25(8) of the Electoral Act 2010, elections cannot hold earlier than 150 days and not later than 30 days before the expiration of the term of office of an incumbent Governor.

Accordingly, the Commission has fixed Saturday 19th September 2020 as the date for the Governorship election in Edo State and Saturday 10th October 2020 for Ondo State. Detailed Timetable and Schedule of Activities for the two elections will be published on our website and social media platforms shortly.

Similarly, the Commission is conducting bye-elections in three (3) constituencies as a result of the deaths of some serving members of the National and State Assemblies. The Honourable Speaker of the House of Representatives has declared a vacancy in Magama/Rijau Federal Constituency of Niger State.

These bye-elections will hold simultaneously in the three (3) States of the Federation on Saturday 14th March 2020. Again, the detailed Timetable and Schedule of Activities will be published on our website and social media platforms shortly.

On this note, let me reiterate the resolve the Commission to stand firm against acts capable of disrupting the elections. As we are all aware, election is a process. However, the process does not begin and end with Election Day activities.

The conduct of party primaries, nomination of candidates, electioneering campaigns and the submission of the list of polling agents are also essential to the electoral process. Above all, good behaviour by all officials and actors involved is crucial for success.

I wish to remind all parties and candidates that violence during party primaries and electioneering campaigns, the snatching of election materials or the deployment of thugs against INEC officials, observers, the media and unarmed security personnel at polling units are acts punishable under our electoral laws.

Already, the political atmosphere in a particular State is charged. No one should regard the release of the Timetable for the elections as a signal to further escalate tension or a call to commence the recruitment of goons and arming of thugs and hoodlums.

I thank you all and God bless.

Trump Asks His Administration To Cooperate With Biden’s Transition