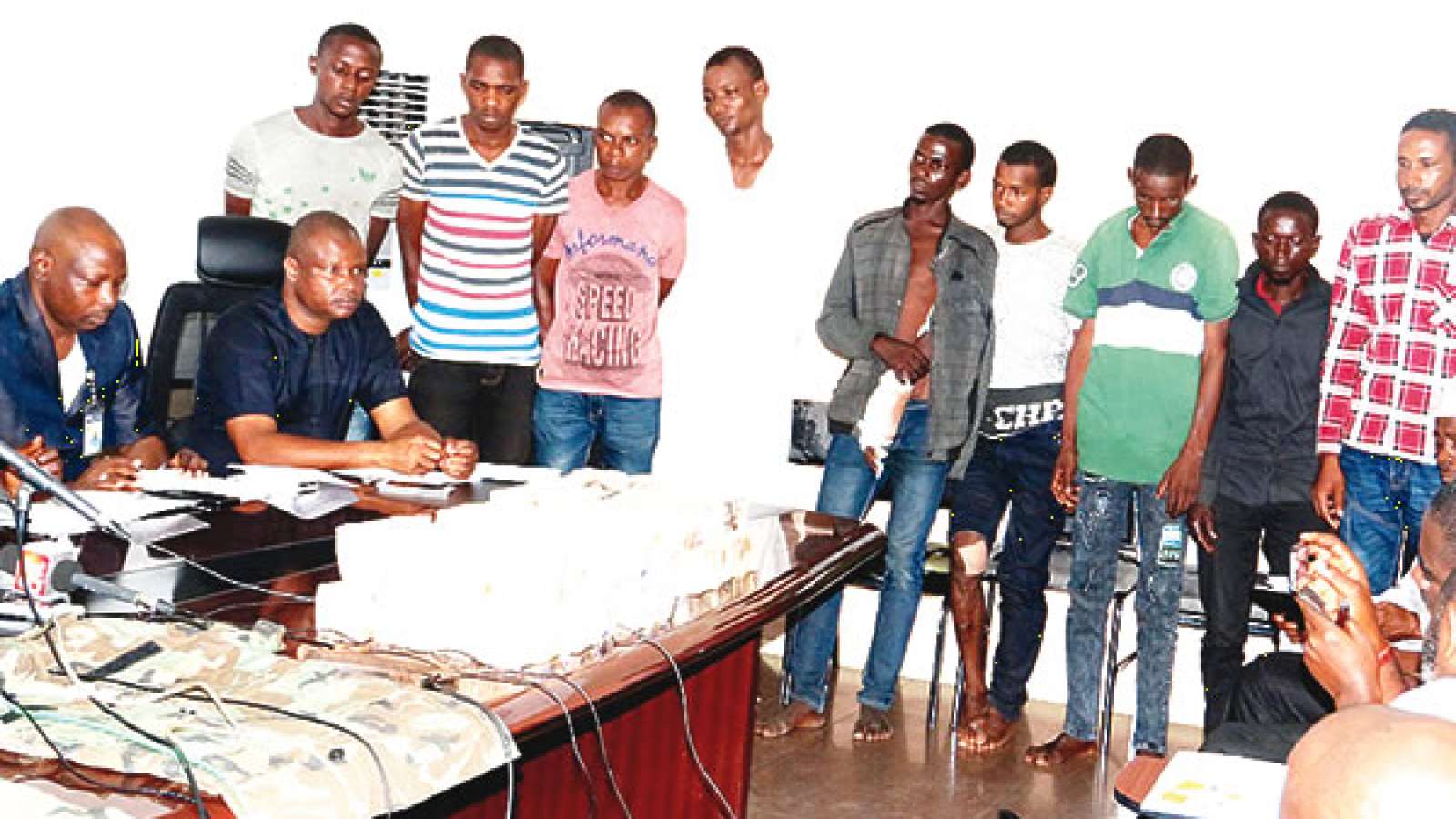 The Police have paraded two Army personnel and seven others for their alleged involvement in the kidnap of the wife of the Governor of Central Bank of Nigeria (CBN), Margaret Emefiele and three of her aides.

The victims who were kidnapped on the 29th of September at Oguneki hills along Agbor-Benin road were rescued on the 30th of September, 2016 by operatives of the Nigeria Police Force.

Two of out the suspects arrested are enlisted in the Nigerian Army serving at 122D Regiment in Maiduguri, Borno State, one was dismissed from the Army while the remaining six are civilians. The kidnappers disclosed that N80 million was collected as ransom.

Disclosing that they didn’t initially know the status of the victim they had abducted, the kidnappers said that on learning about the identity of Mrs. Emefiele, they initially demanded N1.6 billion, but later negotiated the sum down to N100 million.

Items recovered from them include: N14, 725,000, three vehicles and one AK 47 magazine and two cartridges.

According to the police investigation, some of the suspects bought cars from their share of the ransom collected while one of them furnished an apartment in Benin City, the Edo State capital within 48hrs of the incident.

It was also learnt that one of the suspects sustained bullet wound on his hand after a gun duel with the police while trying to leave the forest where they had kept the victims.

He also noted that the IGP ordered the Intelligence Response Team (IRT) and other tactical teams to swing into action to rescue Mrs. Emiefele, unhurt and apprehend all those remotely or directly responsible for the dastardly act.

Awunah said the suspects were arrested for their roles in the kidnap, adding that they had made confessional statements and admitted collecting ransom from the victim’s family.

On the payment of ransom, he said: “It is instructive to mention that money or ransom is sometimes used as a bait or bargaining chip to save the lives of the victims of crime which is primary to security operatives.

Awunah also noted: “It is absolutely important to mention that the Police do not and will not encourage payment of ransom. The relatives of victims of kidnap for ransom are strongly advised to exercise considerable caution to succumb in payment of ransom.

“Payment of ransom is inherently counterproductive because sometimes at the end of the day, it becomes two edged sword; you lose your relative and you lose your money. So, at all times of kidnap scenario, it is pertinent the police are involved and trusted.”

The police refused to disclose the total amount of money requested by the suspects.

The suspects admitted committing the crime. They said they were led by greed.

One of the suspects, Musa Maidabara, said: “My friend Ernest Udefe brought me here because he is my childhood friend. He asked me to come over to Benin and he asked me that when I am coming, I should come with my uniform and my friend, Edwin George.

“When we got to Benin, I asked him what the problem was and he said that he has a friend who goes by the name, Mohammed i.e. Dogo. He said Mohammed told him to come and pick him. I asked for the location and he said we would be going to the outskirt of Benin town. When we went, Dogo came out from the bush and I was asking for what we were doing there, he asked Ernest to open the booth and when he did, he gave him some money.”

When asked why he did not ask for the source of the money, he said: “When we saw the huge amount of money, we decided to take the money to the police at first but greed later set in and we decided to share it amongst ourselves. We got about N6.5 million each.”