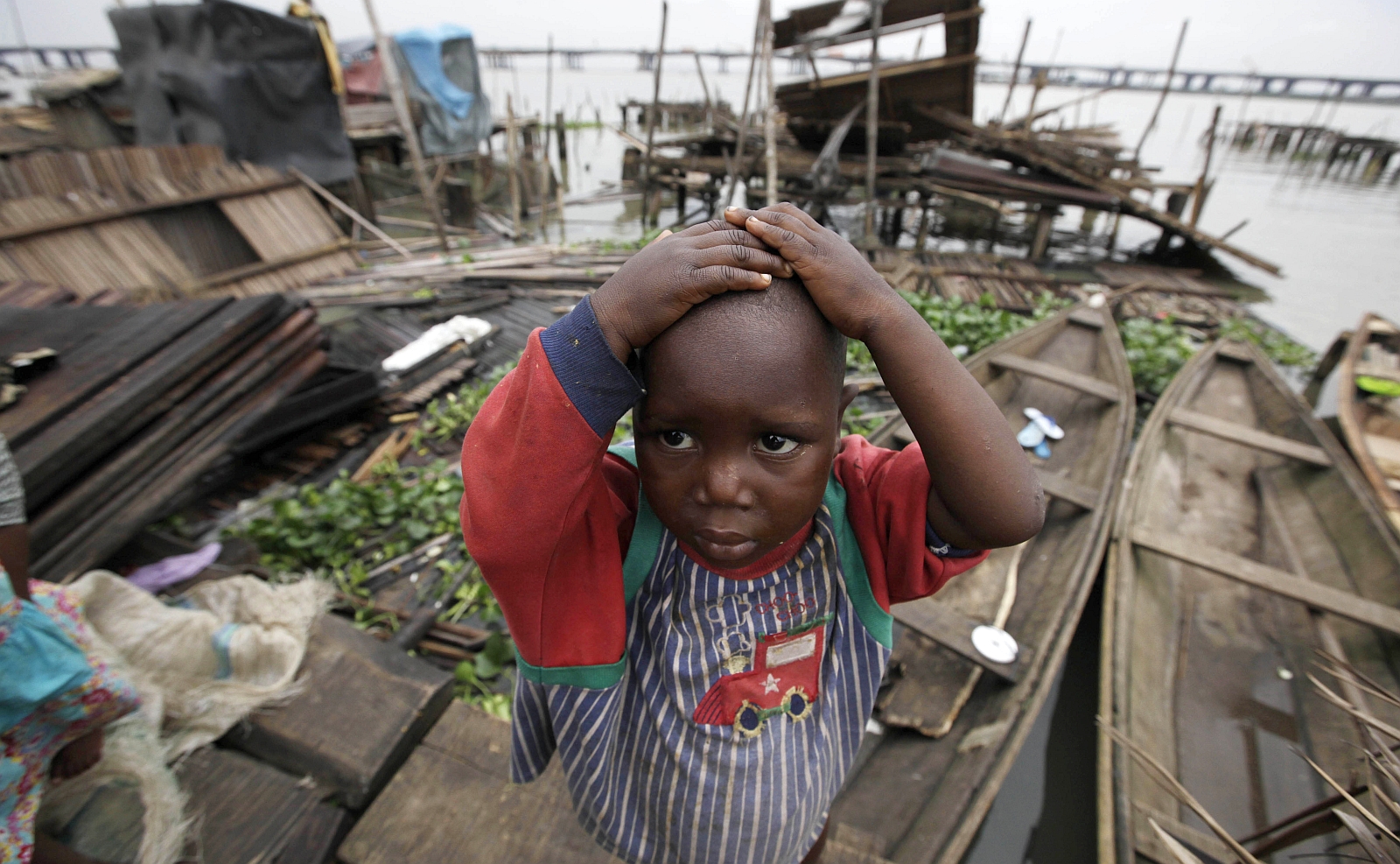 In this photo taken Thursday, July 26, 2012, a child stand in front of his demolished stilt house at Makoko in Lagos, Nigeria. The teeming, floating Makoko slum rises out of the murky lagoon water that separates mainland Nigeria from the island that gave birth to its largest city, a permanent haze of smoke rising from its homes built on timber stilts. A government-led eviction last week that saw men in speedboats destroy homes with machetes there left about 3,000 people homeless and raised new fears among activists that authorities may try to wipe it out the area entirely. (AP Photo/Sunday Alamba)

An international organisation, Guaranteed Healthcare Foundation (GHCF), has raised alarm over the 2018 budget estimate presented to the National Assembly by President Muhammadu Buhari on Tuesday, saying it would inflict untold hardship on the citizenry.

GHCF Executive Director, Dr Dayo Adeyanju, said this yesterday while reacting to the budget in Akure, stressing that the FG is poised to foster more burdens on the Nigerian populace with the N71.11 billion capital expenditure earmarked for the health sector.

In the appropriation bill estimated at N8.612 trillion, health got a capital expenditure of N71.11 billion while the Ministry of Power, Works and Housing got N555.58 billion to be the highest and followed by transportation with the estimate of N263.10 billion.

Adeyanju, who is a public health expert, decried the attitude of the FG and decline in the percentage given to the health sector in the budget estimate, stressing that it would continue to jeopardize the conditions of the people.

“It is quite worrisome because we know that in the last ten years, especially 2009 till date, you will notice that we have been hovering between four and five percent.”

Aside from the steep fall in the appropriation given to health, he also condemned the failure to abide by the World Health Organisation (WHO) recommendation that no nation should accord the sector less than 15 percent of its total budget.

According to him, “And, quickly, this will begin to give one a lot of concern because the WHO recommendation is that 15 percent of the total budget must go to health.

“This means we are retrogressing yearly in terms of our budgetary allocation. And this is totally unacceptable for a nation that truly wants to develop.”

Though he noted that Nigeria is a low-income country, he stressed that it was critical for government at all levels to place the right priority and premium on health expenditure otherwise it would have adverse effects on the people.

“The larger percentage of the spending on health would continue to come from the pockets of the poor people. And this without any doubt will further tilt them to abject poverty and impoverish them.

“A nation that wants to get it right must place the right premium on health because when you build all the roads, railways and other infrastructure, you need the human development indices to drive this processes.

“Except you are going to import people who are going to do all of these. And perhaps, if they are not healthy or challenged, all these would just continue to tilt our people to poverty.

“I think it is high time we began to accord the right priority to health. There is no nation that truly wants to develop that will not make health cardinal to that development. That is how to make a nation fulfilled,” he said.

Explaining the negative import of the health allocation, he revealed that “malaria or complicated malaria these days, for the cheapest doctor, will charge a minimum of N3000 to N5000. And with the prevalence of malaria, each household is expected to have about four bouts.

“There are five households, going by the last NDHS of the population, per family; meaning that they are expected to have 20 episodes and bouts of malaria in one year. Now, when that is multiplied by N5000, it gives N100,000.

In this article:2018 Budget, GHCF, Muhammadu Buhari, Nigeria, Poverty, WHO