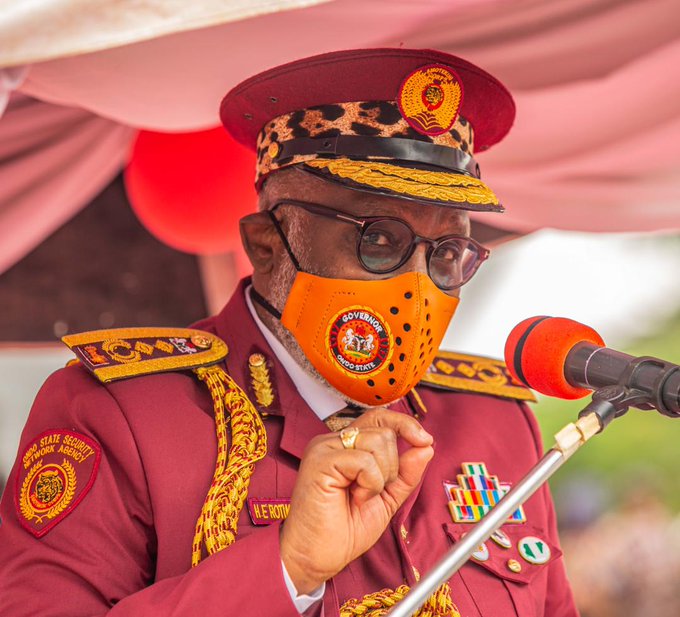 Ondo State Governor Oluwarotimi Akeredolu says there is no going back on his administration’s decision to procure arms and ammunition for operatives of state security outfit, Amotekun.

According to the Nation, Akeredolu  explained that the  weapons, which would be backed by law, are to be used to fight  those he termed as ‘marauders committing crimes against humanity.’

He stated that the incontestable authority of the state must be used   against  “brazen conflict entrepreneurs and armed audacious non-state actors.”

The governor spoke yesterday at the passing-out of newly recruited  Amotekun operatives in Akure.

Akeredolu  said the  establishment of  security outfits by sub-nationals   was  “ necessary and indispensable.”

His words “The Amotekun Corps must be given the tools to carry out its now pivotal, indispensable duties.

“For centuries, we have been admonished that ‘a bad workman blames his tools.’ In the case of Amotekun Corps, the workman is expected to function without good tools.

“Those passing out today have undergone rigorous training at great expense to the state. The training will not end here, it will be continuous. However, no amount of training will mask the debilitation of fighting with one arm tied against implacable foes.”

Amotekun must, therefore, be armed and will be armed and be backed by law. Otherwise, the training will be inadequate and we will be placing the lives of these great patriots in danger.”

The governor decided last week to purchase arms for Amotekun operatives after a viral video showed approval granted to  a similar outfit in Katsina State by the Federal Government..

He also argued that it was wrong to allow non-state actors, especially in the Niger Delta, to bear sophisticated arms while state operatives are disallowed.

He had said: “That Katsina State was able to arm its state security force, with the display of AK47 means we are pursuing one country, two systems solution to the national question.

“If the Katsina State situation conferring advantages on some, in the face of commonly faced existential threats, it means that our unitary policing system, which has failed, is a deliberate method of subjugation which must be challenged.

“The Independence agreement was based on a democratic arrangement to have a federal state and devolved internal security mechanics. We must go back to that agreement.

“Denying Amotekun the right to bear arms exposes the Southwest to life-threatening marauders and organised crime. It is also deliberate destruction of our agricultural sector. It is an existential threat.

“We want to reiterate, that what is sauce for the goose, is sauce for the gander. This is more so, given that the bandits have unchecked access to sophisticated weapons. The state government cannot look on while its citizens are being terrorised and murdered with impunity. We will defend our people.”

The Attorney-General of the Federation (AGF) and Minister of Justice Abubakar Malami could not be reached for reaction.

But his media aide, Dr. Umar Gwandu, said the AGF was not willing to engage anyone on issues that are settled constitutionally.

Gwandu said: “As a Senior Advocate of Nigeria (SAN) and the governor of Ondo State, the AGF will not join issue with him on issues that have been clearly stated in the nation’s Constitution. It is assumed he should know what the law says.”