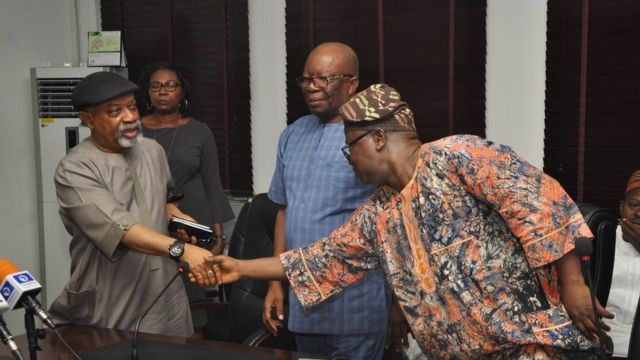 The Federal Government and the Academic Staff Union of Universities on Wednesday traded blame over the four-week strike which the union began on Monday, Punch reports.

The Minister of Education, Adamu Adamu, in an interview with State House correspondents after the Federal Executive Council meeting in Abuja said the demands of the union were being renegotiated.

He said he was therefore surprised when he learnt about the strike, adding that the industrial action was not government’s fault.

But the President of ASUU, Prof. Emmanuel Osodeke, faulted Adamu, insisting that the union visited the minister on Thursday last week and told him what would likely happen.

According to him, the minister did not mention the issue of negotiations when the union visited him.

Adamu, however, insisted that after several negotiations between ASUU and government, both parties had not reached a truce.

He stated, “ASUU, unfortunately, has gone on strike and I am looking for their leaders because all the issues are being addressed.

“The last thing that happened was that our committee looked at their demands but there are renegotiations going on. They submitted a draft agreement which the ministry is looking at.”

Speaking on ASUU’s draft agreement, he said, “A committee is looking at it. Immediately it finishes, the government is meant to announce what it had accepted. Then suddenly, I heard them going on strike.”

On allegations from ASUU about his absence from meetings, he said “ASUU will never say that. I always summon the meeting myself. The meetings I didn’t attend were those that happened when I was in hospital in Germany.

“We want a peaceful resolution. The Federal Government is ready to meet them on all issues they have raised and if there are so many meetings and the gap is not closing, then, I think it is not the fault of the government.

“There is a solution to this. The negotiations are the solution and that is why I have said that I am surprised that ASUU has gone on strike.”

On the disparity in cut-off marks for common entrance examinations across various parts of the nation, the minister said the low cut-off marks in the North were meant to comply with the requirements of the Federal Character Commission.

The Minister of Labour and Employment, Chris Ngige, on his part, described the ongoing strike a “leave” following the failure of the union to notify his ministry before embarking on strike.

Ngige also noted that the union failed in its agreement with the National Inter-religious Council headed by the Sultan of Sokoto, Alhaji Abubakar Sa’ad; and the President of the Christian Association of Nigeria, Rev Samson Ayokunle, by failing to report to the committee before embarking on strike.

The minister made this known in a telephone interview .

Ngige however said, “ASUU failed to get back to us and proceeded on strike without sending notifications. They just gave themselves a leave.

“If you want to go on strike, you should at least inform us officially but they refused to. You cannot just go on strike like that, it is illegal. So, they are just on leave. We will work with them and they will call off the strike.”

On the issue of IPPIS, the minister said, “ASUU went on strike in February 2020, saying their members should not be enrolled on IPPIS at all even when UTAS was not ready but that they should continue receiving their salaries and some allowances via the obnoxious cash system or the abolished recurrent GIFMIS system through which the Federal Government incurred a loss of about N750bn annually paid to ghost workers and other fraudulent financial sharp practices.

“It is pertinent to note that no employee is allowed to dictate to an employer the mode of payment in his organisation in line with the ILO principles at work, provided the wage/compensation is paid as and when due. ASUU should go back to their employers for negotiations; they will call the strike off.”

Responding, Osodeke said the FG did not reach out to ASUU despite paying Adamu a visit on Thursday last week.

“He didn’t tell us anything about renegotiation. If we were with him on Thursday, and we took decision on Sunday, is it not two day difference but nothing from them.”

Speaking on the implication of the government not getting in touch with ASUU, Osodeke added, “We have 30 days and whatever they want to do, we are waiting for them. They don’t have to wait for 30 days, they can solve it in one day or two days. What is he saying about renegotiation? How can one person be saying they are renegotiating without the second party? Is renegotiation not between two people?”

Meanwhile, students of the University of Benin on Wednesday blocked the busy Benin-Lagos Highway in solidarity with ASUU.

The students were seen at the Ugbowo Campus entrance chanting solidarity songs and wielding placards with inscriptions like “Education is our right,” “5 years course has turned to 7 years,” “FG, settle ASUU” and “Enough is Enough.”

The President, Students Union Government, Foster Amadin, said the students would continue the protest in support of the lecturers.