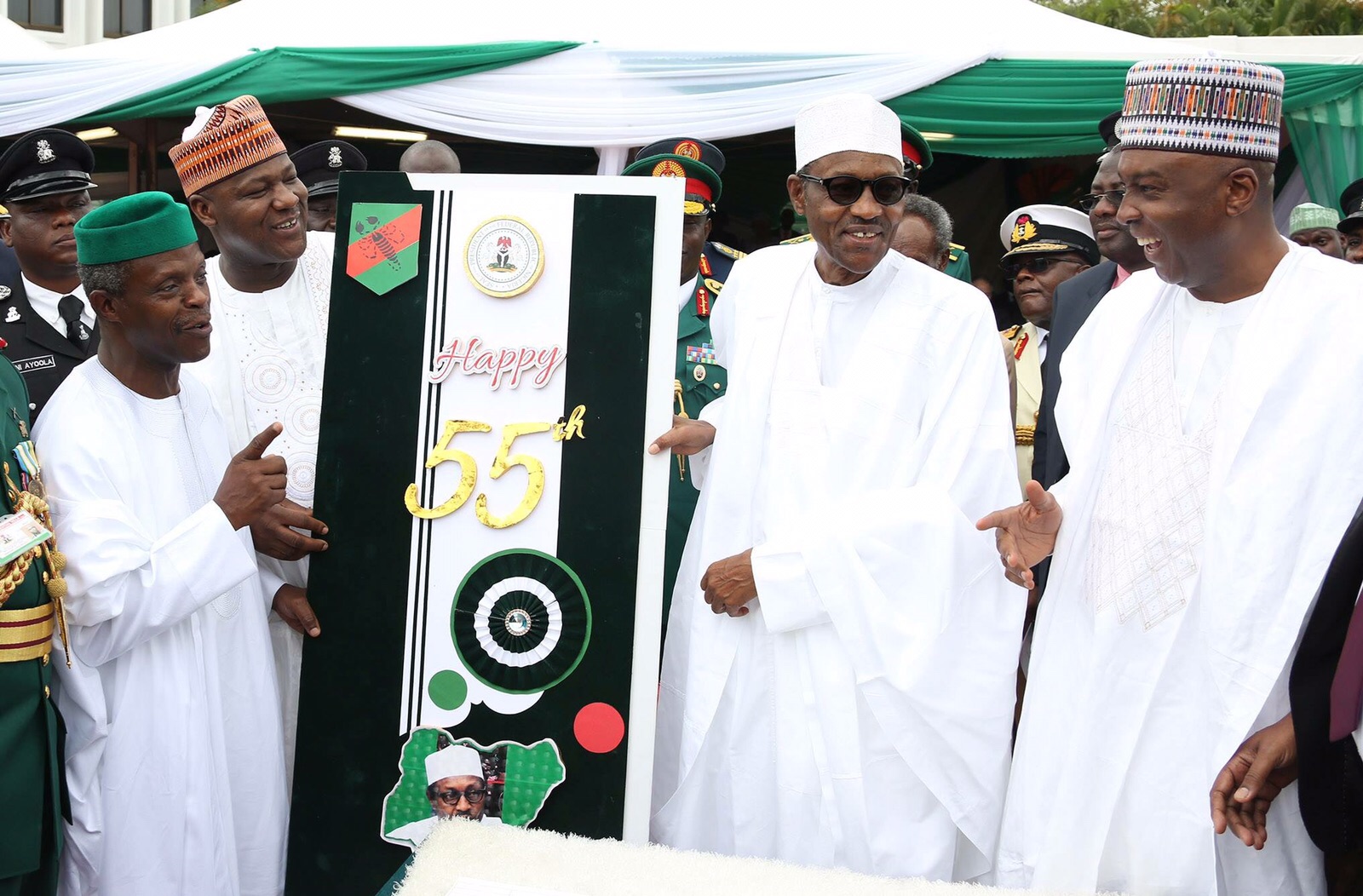 The world’s largest black democracy on Thursday, rolled out drums to celebrate its 55th independence anniversary  with pomp and pageantry at the Aso Rock Presidential Villa, Abuja, Nigeria.

Th Villa was abuzz with faces of some very important personalities who were invited to the ceremony, at the instance of President Muhammadu Buhari. Some of those who graced the ceremony were Vice President, Yemi Osinbajo; Senate President, Bukola Saraki; Speaker, House of Representatives, Yakubu Dogara; Deputy Speaker of the House of Representatives, Yusuf Sulaiman Lasun; Chief Justice of Nigeria, Mahmud Mohammed; Inspector-General of Police, Solomon Arase and former Head of State, Gen. Yakubu Gowon (rtd). The President was dressed in white babanriga and cap while Vice-President Yemi Osibanjo was similarly clad in white agbada with green cap to match the nation’s colours.

Senate President Bukola Saraki, and Speaker of House of Representatives, Yakubu Dogara, were accompanied by some principal offers of the National Assembly, and arrived shortly before the Chief Justice of Nigeria, Mahmud Mohammed.

The one-and-half-hour event held at the forecourt of the Presidential Villa, Abuja, decorated in green and white colours and featured the ceremonial Presidential Change of Guards Parade, a military affair.

The parade was mounted by officers and men of the 177 Battalion and 7 Battalion of the Presidential Guards Brigade, Abuja.

Other features of the colourful event included inspection of new guard/quarter guard; silent drill; posting of sentries; colour/flags patrol; 21-gun salute and echelon reporting of parade, among others.

There were also foot and arms drill, rhythmic march steps, and inspection by parade commander of the soldiers’ weapons to ensure they were battle ready.

At the end of the parade, Buhari signed the Independence Anniversary register, cut a massive green-white-green independence cake and released white pigeons to signify peace.

He was accompanied to this by a few of the dignitaries, including the Service Chiefs; Inspector-General of Police, Solomon Arase, Osinbajo, Saraki and Dogara and Mohammed.

Buhari, Osinbajo, Saraki, Dogara and Mohammed shared light refreshments after the ceremony before proceeding to the President’s office for small talks before they all departed.