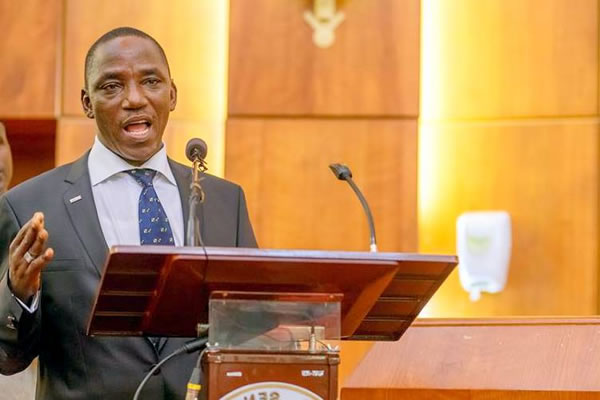 Sports and Youth Development Minister, Solomon Dalong Wednesday ordered the Nigeria Football Federation (NFF) to clear the backlog of unpaid match bonuses and allowances due to players and national coaches before Christmas.

Dalong fired the deadline when he was declaring open the 71st Annual General Assembly of NFF at Transcorp Hilton Hotel, Abuja.

He decried as unhealthy for the growth of football a situation where players and coaches are not accorded their due reward.

The minister tasked the ‘Glasshouse’ to recognize and reward appropriately ex-players and former administrators whose hard-work served as the plank for the development of football in country.

He similarly decried the ‘suspicious’ manner the federation was being run. He said officials have in the recent time arising from selfish interests, plunged the country’s football into crisis, pleading that constructive and peaceful engagement be employed to resolve the internal crises differences rocking the NFF.

Dalong warned that if his warnings were not heeded, he would not hesitate to step on people’s toes, if that was required to move Nigeria’s football forward.

“We behave in a manner that raises so much suspicion. The leadership of NFF’s leadership must administer football with justice and
fairness. Let me say without fear of contradiction that NFF has been associated with great progress, controversy, and crisis. If stepping on people’s toes is what will move Nigeria’s football forward, then I will not be a foe to football family because I am going to step on many toes,” Dalong threatened.

He reiterated the essence of football as a tool for national unity, integration, wealth and employment creation, adding that the sport is a very critical partner in forging national security and molding of future leaders.

In a related development, a much lower proposal of 150,000 Naira per player of the victorious Golden Eaglets has been tabled by the sports ministry after a proposal of 750,000 Naira-a-player was rejected by the country’s Presidency as “too much”.

It has already been reported that the federal government has rejected an initial proposal by the sports ministry to reward the Eaglets after they won a fifth FIFA U17 World Cup in Chile last month.

According to africanfootball.com, the government of President Muhammadu Buhari has warned that next year will be rough for the country because of the poor economy and has moved to cut back drastically on government spendings.

It would therefore be seen as double standards if the government now splashes a fortune on the schoolboy stars.

“The proposal has been reviewed after the first rejection. We wait for the green light from the presidency on the date for the reception and the reward,” a sports ministry official disclosed.