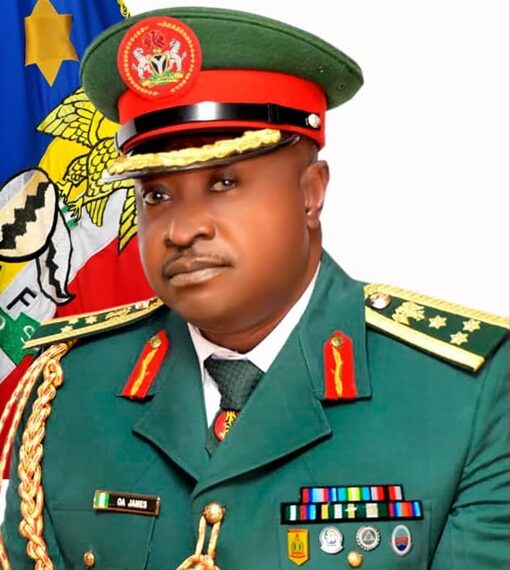 The General lost his life after a corporal identified as Abayomi Edun crushed him at the barracks on Tuesday night.

The deceased was reportedly walking to his residence when the corporal driving an SUV with number plate EKY 177 FX, hit him.

Edun was said to be under alcoholic influence at the time of the accident.

A source told Daily Trust that the deceased was rushed to the NAFRC Medical Centre where a doctor certified him dead.

In a statement, the set of James at National Institute for Policy and Strategic Studies, Kuru, described the loss as shocking.

“Our indefatigable, humble, friendly bridge builder, the Monitor General SEC 40 of the National Institute for Policy and Strategic Studies, Kuru, Brig Gen AO JAMES, mni just departed. He died from injuries sustained from a knock down on the road yesterday (15/11/22) evening in Lagos.”

“May his soul rest in peace. Our condolences to the family, AANI especially the SEC 40. May the Lord console all and grant the fortitude to bear this irreplaceable loss. So sad,” read the statement signed by ACM Kayode Olagunju.

According to the deceased’s profile on NARFC website, the late General had first and second degrees in Accounting and Finance. He was a fellow of the Association of National Accountants of Nigeria (ANAN) and held memberships of the Nigerian Institute of Management (NIM), Nigerian Institute of Directors (MIoD), Chartered Institute of Taxation (ACTI), and the National Institute (mni).

The following Decorations/Honours were also awarded to him: