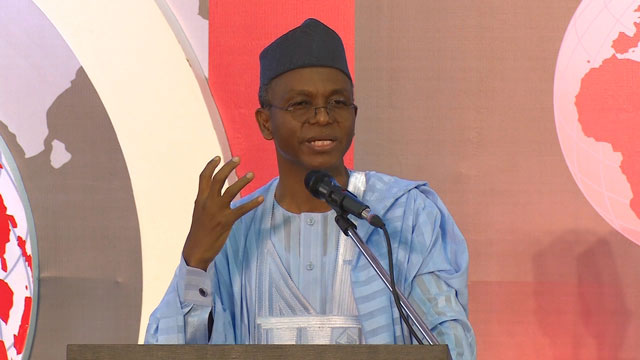 Kaduna State Governor, Mallam Nasir El-Rufai, has called on Nigerians to thank God for delivering the country from the hands of Goodluck Jonathan and the Peoples Democratic Party, PDP.

The governor said Buhari inherited an ailing country from Jonathan on May 29, 2015.

According to him, the kind of underhand dealings that went unperturbed under the administration of former President Goodluck Jonathan were more stranger than fiction.

El-Rufai spoke at the opening of a three-day retreat organised for State House correspondents in Kaduna.

The retreat with the theme, “Journalism and the change mantra, State House in focus” is organised by the Presidency and is being hosted by the Kaduna State Government.

El-Rufai, who spoke on the topic, “The choices before the State House Press Corps in enabling change,” said consequences of the incompetence and corruption that reigned under Jonathan are only becoming clear to all.

He said, “The responsibility that has been thrust in the hands of the new government is immense. The APC inherited a country at the tip of failure.

“As is becoming clearer by the day, some of the things that went on under the previous government are stranger than fiction.

“The consequences of the incompetence, the thievery and the divisive ethos that reigned are only becoming clear.

“Nigerians are only beginning to realise that the Jonathan government, despite years of $100 oil, was borrowing to pay salaries. The PDP simply ran this economy aground.

“Our party and our president will do their level best to pick up the pieces, restore economic vitality and make life better for Nigerians.”

He noted that journalism had an important role in the change mantra.

The governor said, “Tough decisions are on the horizon. Will the media afford a platform for a fair discussion of the tough choices that are looming?

“As the quest for accountability continues, will the narrative seek to uphold the public interest, or will it side with the formidable artillery corruption can deploy in its attempt to fight back.”