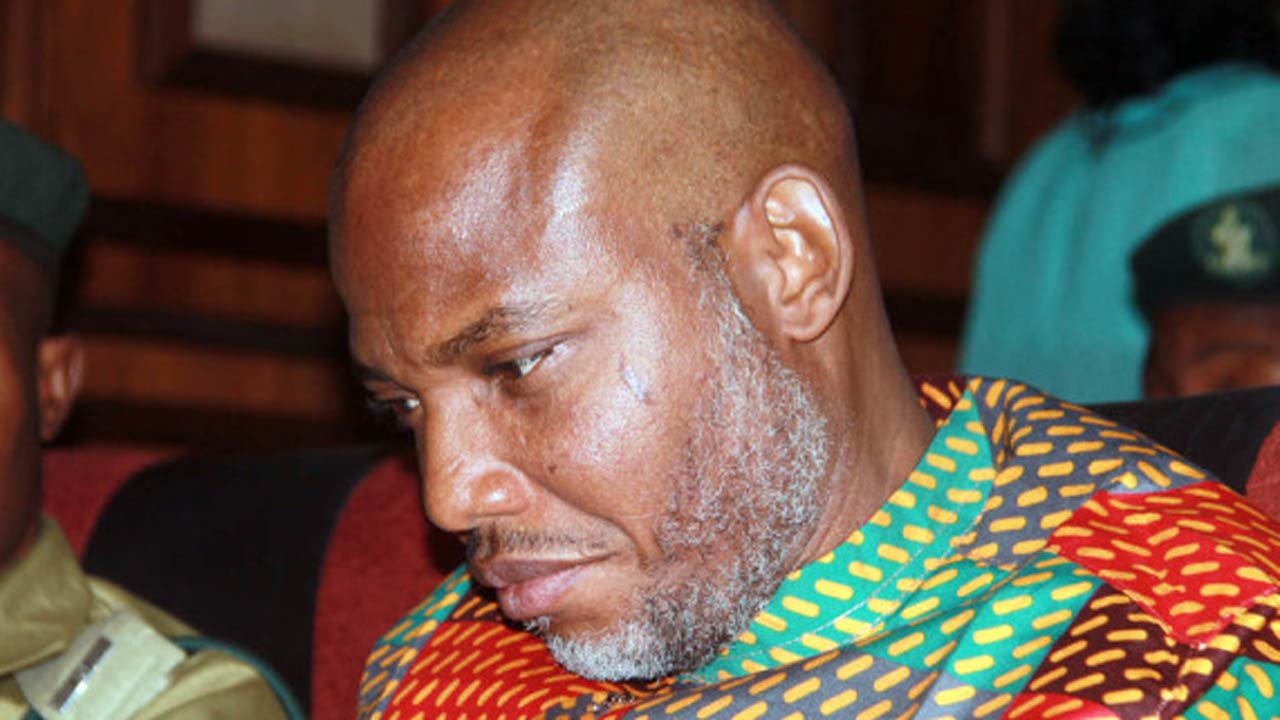 The troops of the Operation Python Dance II allegedly invaded the family home of the Indigenous People of Biafra (IPOB) leader, Mazi Nnamdi Kanu, in Afaraukwu, Abia State, around 5:00 p.m. yesterday. The palace of Kanu’s father, Eze Israel Kanu, who is the traditional ruler of the Afaraukwu community was destroyed.

The whereabouts of Kanu, his father and his mother during and after the invasion were not made known.When a call was put to the family, a younger brother of Kanu, popularly called Fine Boy, confirmed the incident but did not comment on other matters. He invited interested journalists to come to the house and take pictures of how the invaders destroyed the compound and desecrated the traditional ruler’s palace.

Residents of the area, who spoke on condition of anonymity, said the soldiers on arrival shot sporadically for about 40 minutes that the invasion lasted.A resident said that other residents were contemplating not spending the night in their homes around the Kanu’s home for fear of a fresh invasion in the night.

But when contacted, the police spokesman in the state, Geoffrey Ogbonna, said the command was unaware of the invasion. The spokesman of the 14 Brigade, Nigerian Army, Ohafia, Major Oyegoke Gbadamasi, referred journalists to make their inquiry through dedicated telephone lines.

Earlier yesterday, two persons said to be members of IPOB who wore the group’s outfits were reportedly shot dead along Bank Road in Umuahia, while another person sustained bullet injuries while coming out from the nearby branch of Zenith Bank.

Both incidents occurred around 10:00 a.m. Eyewitnesses said members of the Operation Python Dance 11, after the shootings, quickly took the bodies of the victims and the injured person away.Before the incident, scores of IPOB members were said to be marching along Akanu Ibian / Bank Road, less than 100 meters to the Government House gate singing and asking to know where the soldiers were. This, according to the eyewitnesses, prompted the shootings by the soldiers who were very close.

It was also learnt yesterday that the Ariaria International Market Police Station in Aba was burnt. The police spokesman, Ogbonnaya, who confirmed the Aba police station incident, said there was no human casualty.Markets, banks and other commercial houses as well as the Central Police Station, Umuahia closed for business and the streets of Umuahia were deserted.

The invasion was carried out shortly after Governor Ikezie Ikpeazu announced that soldiers would be withdrawn from the streets of Aba and Umuahia from today as part of steps to curb rising violence and clashes between the security agents and members of IPOB.

Ikpeazu, who announced this in a statement he personally signed, said he would soon meet with President Muhammadu Buhari to find ways of relaxing the Operation Python Dance 11 in the state. He warned that government would no longer tolerate violent demonstrations and destruction of property by anyone.

The statement read: “The security situation in Abia in the past few days, which led to the deployment of soldiers into our state ahead of the Operation Python Dance 11, has become of great concern to both the government and the citizenry.

“After several interventions, I want to inform you that by tomorrow morning, there will be withdrawal of soldiers from the streets at Aba and Umuahia, apart from the pre-existing military checkpoints at various locations in the state.

“With the expected exit of soldiers from the streets, we must warn that we will not tolerate agitators and protesters taking over the streets for any reason at all.”The governor condemned attacks on police stations and military posts at Aba and Umuahia and warned against acts that are capable of causing insecurity in the state.

“We have also observed illegal acts of throwing petrol bombs and setting up of bonfires to obstruct free movements along some roads by suspected miscreants and warn that such acts should stop forthwith.

“To mischief makers who want to use Abia as their base, I announce to you that henceforth, Abia will be too hot for you to carry out your wicked acts as the government will work with security agents to ensure the protection of lives and property in the state without fear or favour.”

Ikpeazu warned hoodlums and miscreants, some of whom were allegedly brought into the state by unscrupulous individuals, to burn the Ariaria International Market to cripple the economy of the state and cause widespread suffering.“It was this group that originated the rumours of attacks and counter- attacks around the area and also tried to create panic to force people out of their homes to enable them to execute their evil intentions under the cover of orchestrated crises.

“We have it on good authority that the same group of hoodlums attempted to burn down the police station at Ariaria market early today and security agents are currently on the hunt for them and those outside the state who are sponsoring their evil actions. Not even one of them will escape the full weight of the law”, the governor said.

Ikpeazu said members and sympathisers of IPOB should desist from spreading false rumours capable of throwing Abia into disorder. The chairman of the Conference of Nigeria Political Parties (CNPP), Alhaji Balarabe Musa, urged the Federal Government to immediately convene a meeting with leaders of the agitators, saying that only the unity of the nation could lead to development.

Musa cautioned the government against the excessive use of force to quell people’s agitation against marginalisation.“The reaction by the soldiers against IPOB members is bound to happen. What is necessary now is for the Federal Government to sit together with them and resolve this problem. The government should call all the secessionist groups across the country with a view to addressing the agitation for secession by those who felt marginalised in Nigeria.”

Musa advised that all Nigerians be enlightened that there is no need to go to another war. “It is unheard of that those agitating for the creation of Biafra are even flying the flag of such state in the country. This is what made it secession. And no country can tolerate such.

“There is evidence of marginalisation against the east. For instance, there was a time no Igbo man was in the security services in Nigeria. When Buhari’s government came into office, there were two instances when he did not appoint any Igbo man in his kitchen cabinet. And when they complained to him, he said they didn’t elect him. Marginalisation against the south-east can be proved,” he said.

The CNPP boss urged south-east governors and their leaders to advise Kanu to negotiate with the Federal Government.Meanwhile, IPOB lawyer, Ifeanyi Ejiofor, has accused the military authorities of deliberately provoking IPOB to resort to arms struggle.

In a live radio programme in Port Harcourt, Rivers State yesterday, Ejiofor stated that rather than take up arms, IPOB would continue to resist provocation. “We know the people who are attacking them. They are all over the place. Certainly not the northerners or Hausa in Port Harcourt,” he said.

He stated this in a reaction to the claim by the Rivers State police command and the Arewa Consultative Forum (ACF) that IPOB members unleashed the violence that erupted at Oyibo town leading to the death of a police officer and wanton destruction of property belonging to northerners.

The lawyer said IPOB members were not responsible for the Oyibo violence. He charged victims of the violence who are mainly northerners to contact the police to investigate the incident. According to him, IPOB members are not at war with northerners or anybody living in Port Harcourt.

Besides, the Nigerian Army has commenced an investigation into video clips trending online alleging humiliation of innocent citizens in Abia State by soldiers.

A statement yesterday by the Deputy Director, Army Public Relations, 82 Division, Col. Sagir Musa, said the investigation was with a view to ascertaining the source of the video and its actors even as it promised to apply necessary sanctions against its men if found guilty.