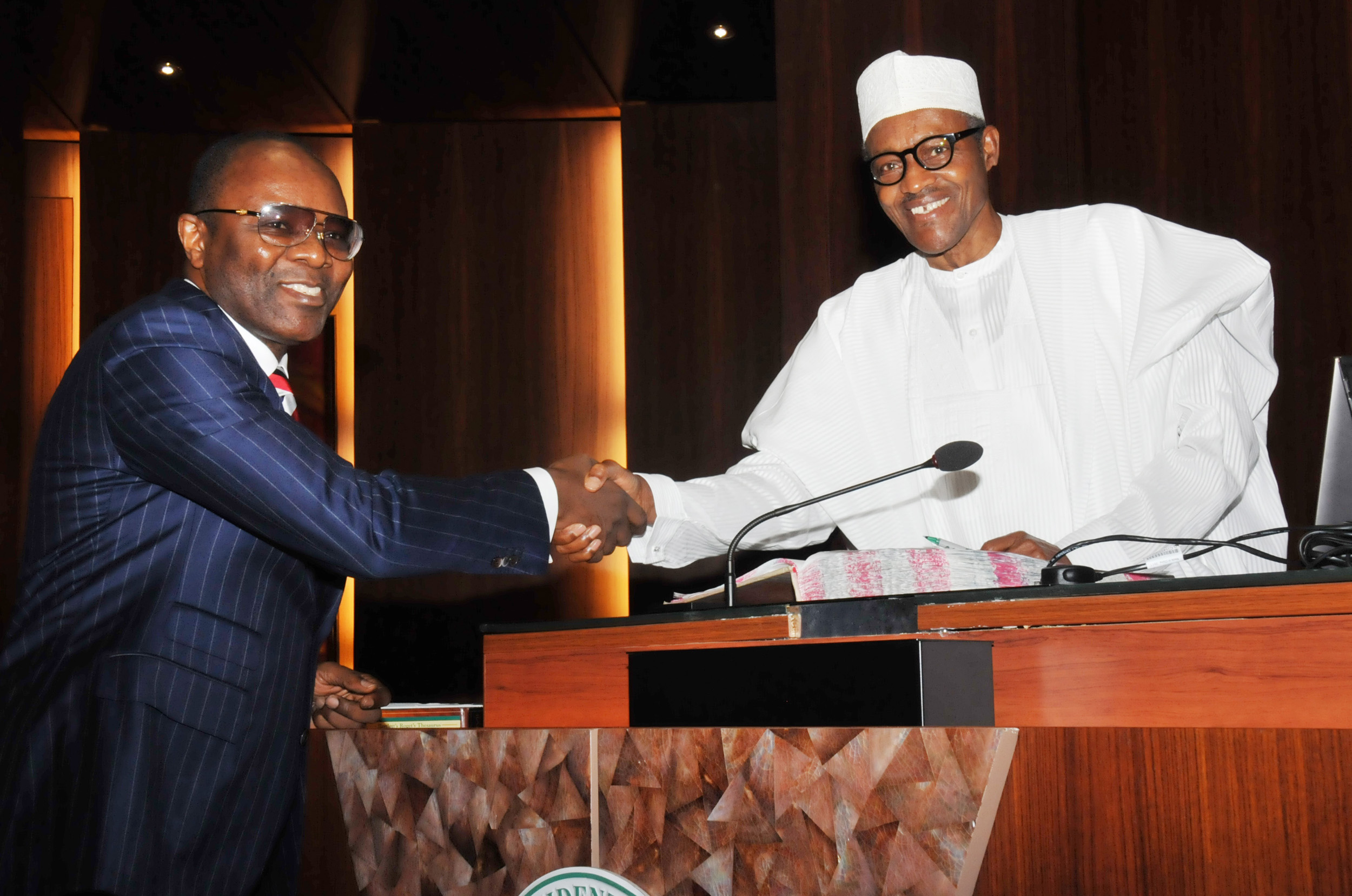 Dr. Ibe Kachikwu and President Muhammadu Buhari after his oath of office as the Minister of State for Petroleum

President Muhammadu Buhari’s overall plan for Nigeria’s oil and gas sector for the next four years was on Wednesday made known by the Minister of State for Petroleum Resources, Dr. Ibe Kachikwu.

According to ThisDay, Kachikwu who doubles as the Group Managing Director of the Nigerian National Petroleum Corporation (NNPC), said in Abuja that the government would pay more attention to increasing Nigeria’s crude oil and gas production within this period to earn more revenue from there.

He also stated that the Petroleum Industry Bill (PIB) which has remained dormant for years would be revived and represented to the National Assembly, albeit with new or reviewed terms.

According to him, the president has directed him to change the age long perception of Nigeria’s petroleum industry as being corrupt and opaque. He added that going forward, the ministry of petroleum resources would have to imbibe new operational character that is in line with standard practices.

“The work in this ministry is going to be very intense. There is a lot to be done. I think we have lost a lot of momentum in this sector from the practices in the past and coupled with the difficult international environment that we now need to begin to sit down and map out very clear deliverables for us,” Kachikwu said in a meeting with heads of departments and parastatals in the ministry.

Pledging to follow due process in his work at the ministry, he explained that within the next couple of months, the ministry and its personnel would have to work on keying into the government’s plan for the sector.

“I will imagine that the first couple of months, we will get the heads of the various parastatals to work with us to understand what the agenda of the administration is but very quickly, we will also sit down to see if there are capacities that would be needed. I am not saying I am going to change people but we will absolutely require you to show an ability to deliver so that we can help finish the change processes that we have begun.

“Clearly, these things cannot be done by one person and the beauty of human association is that once you get everybody to an inclusive position, everybody delivers. I do not have the magic wands, the magic wand will come from all of us and all of us have to buy into this but one thing I want to assure you is that in my time here, I will respect the dignity of everybody,” he explained.

“As far as the president is concerned, there are very clear directions and one is that the perceptions and working atmosphere about this ministry must change. We are working on that at the NNPC but people here who supervise the NNPC must change.”

“We have dwindling resources and the whole nation depends on this ministry to provide the resources, so, we must be ready to put on the thinking cap of how to cut costs, how to meet federation accounts requirements, how to put controls to block leakages, how to create new income streams and new investments.

“So, grow income, cut costs, help the nation stabilise, these are very key and I think once you take that, you have probably gotten a good understanding of where we are headed. I will like to be able to do what we have done in the NNPC in three months where people can come and work and be happy,” he added.

He noted on the PIB that the National Assembly would be engaged by the executive arm of government to get the bill passed mostly by reviewing the controversial terms that had held it back from getting through the legislative processes.

On gas, the minister said that the global blueprint encourages gas development and that it is key even though it costs money to get more gas to industries and homes.
He said that the government will also concentrate on distributing stranded gas in the country by getting key partners to transport gas across the country, while getting the oil majors to commit to producing more gas for domestic consumption.
The gas pipeline, according to him, is also key but government is yet to complete extant projects that would upon completion benefit other parts of the country.

Speaking on improving processes and controls at the NNPC, he said that the government is analysing the country’s total fuel consumption in a day with a view to reviewing NNPC’s domestic crude oil allocation which currently stands at 442,000 barrela per day.

He revealed that in collaboration with the Petroleum Products Pricing Regulatory (PPPA), he was already studying whether the daily consumption of the country is actually 40 million litre per day or 25 million litres per day, adding that by the end of the year and as government approaches its budgeting circle, it will take a decision on this.

Asked to give an update on the direct sale of crude oil and direct purchase of products, he said that the government had adopted the Offshore Processing Agreements (OPA), “but the aura around OPA around the world was negative even though we saved about $200 million in the three months of temporary system, we still hope we could do better.”

According to him, a firm is already doing an analysis on the refineries in line with its requirements for the Direct Sale of Crude and Direct Purchase of Products that it expects to commence soon.

On the sudden reemergence of fuel queues in the country, he said that Buhari has written to seek the National Assembly’s approval for an extra budget of N413 billion for payment of outstanding fuel subsidy claims.

The federal government had announced the approval of the payment of the fund on November 4 but the marketers said that they are yet to receive their money.

“You know that this President doesn’t do lip service. The money was approved by Mr. President. The money has not reached them. There is a process that our constitution requires in terms of approving those extra budgeting approval. So Mr. President is taking time to write to the National Assembly,” he said.

The minister added that most of the marketers would close up since they have zero capacity to import without payment. According to him, the NNPC does not have the singular capacity to import the petroleum products that are required to meet the country’s consumption, hence the need to pay marketers.

Kachikwu also noted that without the payment of the arrears to the marketers it would have a negative effect on their support.

“So, we are providing for the money but need the money from outside the executive and it will go through a process. I will urge them to be a bit patient, the President is working very hard to have all these issues resolved.”

He however insisted that there is enough supply of product as off-shore and on-shores products that can sustain the nation for about 23 days, stressing that the sufficiency of products is not the issue, but panic buying by Nigerians.