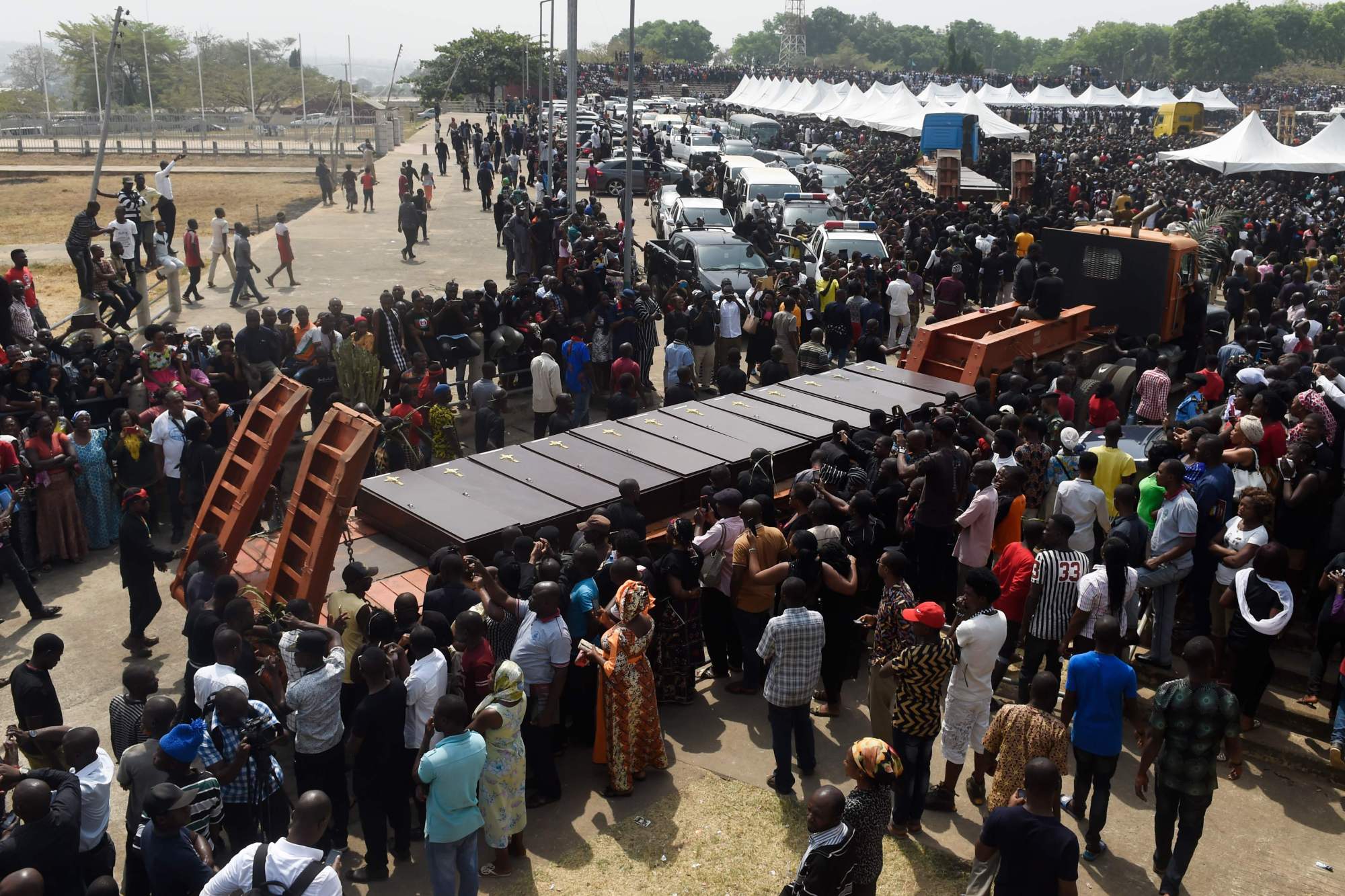 Coffins arrive at Ibrahim Babanginda Square in the Benue State capital Makurdi, on January 11, 2018, during a funeral service for scores who died following clashes between Fulani herdsmen and natives of Guma and Logo districts. Violence between the mainly Muslim Fulani herdsmen and Christian farmers has claimed thousands of lives across Nigeria's central states over the past few decades. The conflict is being driven by an increasing need for resources -- primarily land and water -- and is often exacerbated by ethnic and sectarian grievances. / AFP PHOTO / PIUS UTOMI EKPEI

The United States Council on Foreign Relations (CFR) says it has documented at least 19,890 deaths in Nigeria since June 2015, just after President Muhammadu Buhari assumed office on May 29, 2015.

In a related development, the UK House of Lords on Thursday expressed worry about the inability of the Buhari government to end killings in Nigeria, warning that ethno-religious violence in the country may escalate to the Rwanda type genocide if the federal government remained complacent about it. The concern followed a debate on the recent killing of about 200 people in Plateau State by suspected Fulani herdsmen.

Thisday reports that the CFR, an independent body of experts dedicated to providing advice on policy options facing countries, put the cumulative deaths in Nigeria from May 2011 to May 2018 at 53,595.

This statistics was obtained from a section of the organisation’s website, Nigeria Security Tracker (NST). According to the think tank, the NST tracks violence that is both causal and symptomatic of weakness of Nigeria’s political institutions and citizen alienation. It said the data was based on weekly surveys of Nigerian and international media and that they included violent incidents related to political, economic, and social grievances directed at the state or other affiliated groups (or conversely the state employing violence to respond to those incidents.)

In the CSW’s latest report, the organisation said, “During the first quarter of 2018 CSW documented 1,061 deaths in 106 attacks by the Fulani militia on communities in Adamawa, Benue, southern Kaduna, Kogi, Nasarawa, Plateau and Taraba states, with an additional 17 lives lost in attacks in the south of the country. CSW also documented seven instances of violence targeting Fulani herders or communities in which 61 people lost their lives; two of these attacks occurred in the south of the country. The recent deaths in Plateau State bring the number of casualties recorded so far in herder militia attacks in central Nigeria in the second quarter of 2018 to 440.”

The organisation said the figures were obtained by its offices in the United Kingdom and in Nigeria using organisational records, a timeline issued by the Office of the President of the Nigerian Senate, #MiddlebeltMassacres in Twitter, news sources, and the United States-based Council on Foreign Relations’ Nigeria Security Tracker. It further noted that there was more to the violence going on in Nigeria – often referred to as “farmer-herder clashes” – than meets the eye.

The report added, “However, attacks by herder militia are currently occurring with such frequency, organisation and asymmetry that the characterisation as ‘clashes’ no longer suffices. Armed with sophisticated weaponry, including AK-47s and on at least one occasion, rocket launchers, the herder militia is believed to have killed more men, women and children in 2015, 2016 and 2017 than Boko Haram, in what local observers increasingly describe as a campaign of ethno-religious cleansing.”

CSW also said it had documented over 400 deaths in 46 attacks during the second quarter of 2018. In one of the most recent, at least 200 people were reported to have died in coordinated attacks on around 50 communities in Barkin Ladi Local Government Area in Plateau State, which began on June 22 and lasted until June 24, the report said.

The majority of victims of the Barkin Ladi attacks were said to be women and children. The CSW report noted that 120 people were killed as they returned from the funeral of an elderly member of the Church of Christ In Nations (COCIN).

Speaking on the violence, CSW’s Chief Executive, Mervyn Thomas, accused the Nigerian government of refusing to fish out the perpetrators of the violence. Thomas called for the formulation of a holistic security strategy to address the violence and other threats to national security as a matter of urgency.

“CSW extends its deepest condolences to all who have lost loved ones in the weekend of attacks in Plateau State. It is worrying that the authorities appear more focused on controlling victim communities than on tracing, disarming and arresting the perpetrators of this violence. We urge the state and federal governments to prioritise the protection and rehabilitation of vulnerable communities, and to refrain from victimising them further,” Thomas said.