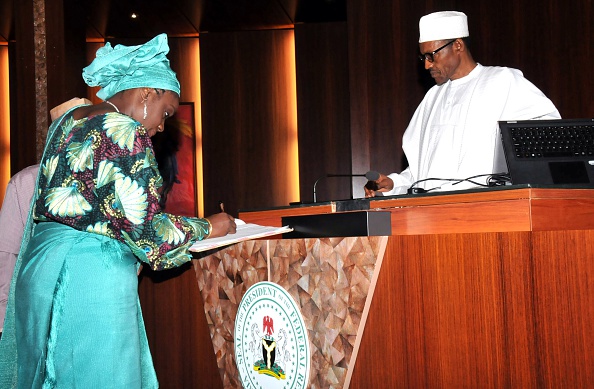 Finance minister Kemi Adeosun (L) signs the register before Nigerian President Mohammadu Buhari after taking the oath of office in Abuja on November 11, 2015. Nigeria on November 11 finally got a new government after more than five months of waiting, as 36 ministers and junior ministers swore the oath of allegiance and were assigned formal roles. The ceremony at President Muhammadu Buhari's official residence in the capital, Abuja, brought to an end 166 days in which he has effectively been in sole charge of Africa's leading economy. AFP PHOTO / STRINGER (Photo credit should read STRINGER/AFP/Getty Images)

Adeosun, 48, was born in Ogun state in 1967 and is the third of four children. She was raised both in Nigeria and in London. She graduated in applied economics at the University of East London and obtained a postgraduate diploma in public financial management from the University of London.

Before being appointed as the new finance minister by President Muhammadu Buhari, she worked as the finance commissioner for Ogun in south west Nigeria.

Adeosun’s career started in 1989 when she was hired as accounting assistant at British Telecom, according to her LinkedIn profile.

Adeosun also worked for three years as senior auditor at Goodman Jones and as internal audit manager for both London Underground Limited and Prism Consulting. She was the managing director of Lagos-based investment bank Chapel Hill Denham Management from 2002 till 2007, after which she covered the same role at Quo Vadis Partnership.

In 2011, she became managing director at Quo Vadis Partnership and covered the role of finance commissioner in Ogun from 2011 till 2015.

Reactions after her appointment

There have been contrasting reactions regarding her appointment. Bismarck Rewane, head of Financial Derivatives. in Lagos, said the appointment was an “excellent choice,” arguing that Adeosun was able to put Ogun’s state finances in a “strong position”.

However, some have argued Adeosun does not have enough experience to cover the role of finance minister at a moment where the country’s economy is in dire straits following a fall in crude oil prices.

“She is relatively inexperienced, especially compared to her immediate predecessor Ngozi Okonjo-Iweala, a political heavyweight,” Malte Liewerscheidt, senior Africa analyst at Verisk Maplecroft, was quoted by Forbes as saying.

“Adeosun has a strong background in the UK’s private financial sector but may struggle to navigate federal politics as the only post she previously held in Nigeria was commissioner of finance in Ogun State.”

A few weeks before being appointed, Adeosun told reporters she supported Nigeria’s decision to devalue its currency and restrict foreign exchanges to help the economy.