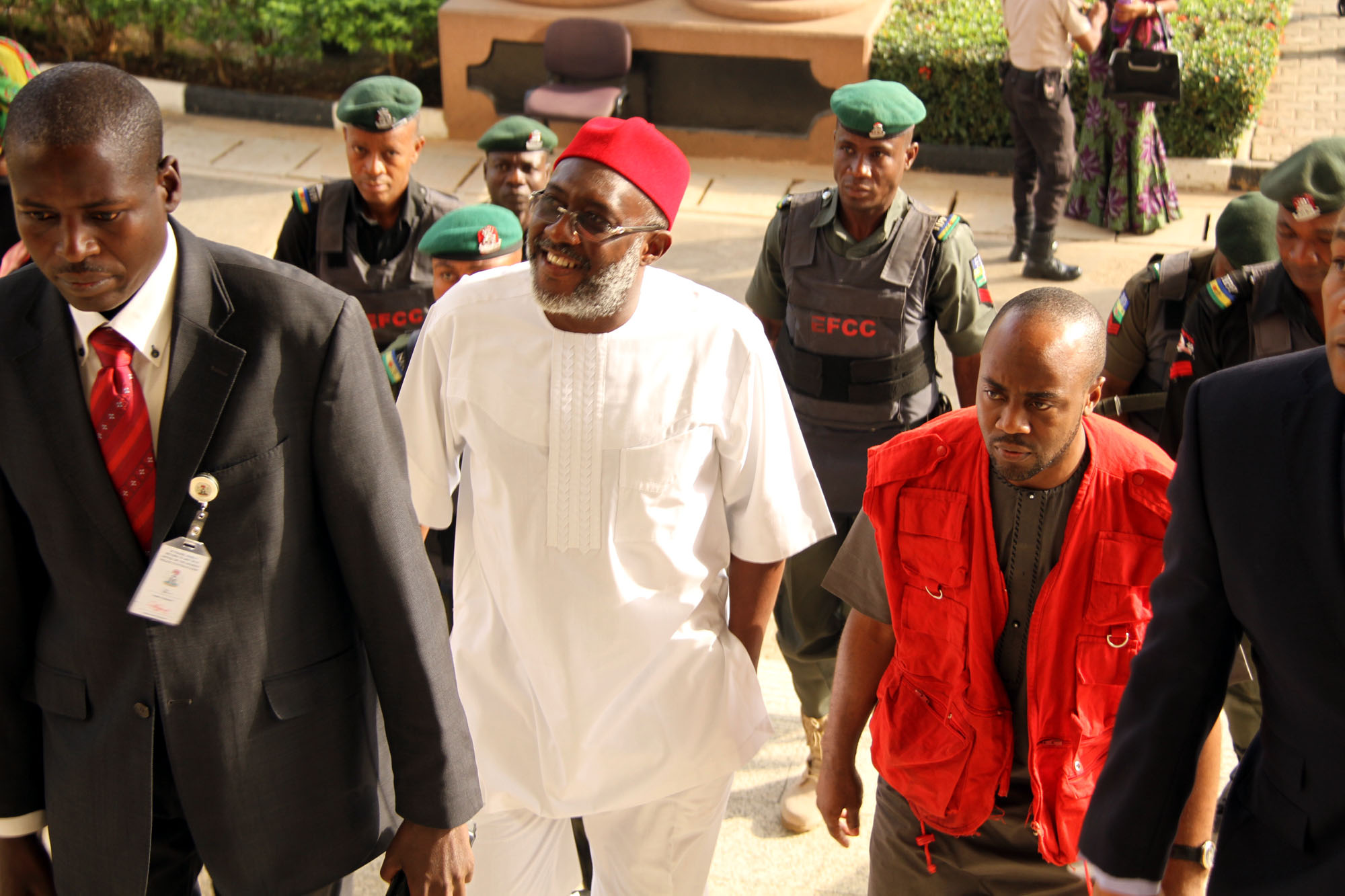 The PDP National Publicity Secretary, Chief Olisa Metuh has fought many political battles, but this time he it appears that he is up against powers that detest his guts. Indeed, by every available indication, the APC-led establishment appears to be in a frenetic mode to jail the garrulous opposition spokesman, who in the last nine months, has continued to give them sleepless nights with his steady criticisms on the sudden decline of the state of the nation under their watch.

Since his arrest on January 5, 2016 and prolonged detention by the Economic and Financial Crimes Commission, (EFCC), the media choreographies, the controversial impossible bail condition imposed by the Justice Okon Abang of the Federal High Court, Abuja, and subsequent dramatic galloping of the case; the critical question has been the actual reason the system is after Metuh.

The EFCC is insisting that Metuh was wrong to have received the sum of N400 million from the office of the office of the former National Security Adviser (NSA), Col. Sambo Dasuki on the orders of former President Goodluck Jonathan to execute publicity related assignments.

It was no secret that Metuh spared no lines in heaping blames on the present administration for the sudden decline of the nation’s economy and attendant hardship on the citizens as well as challenging the government on issues of constitution violations and infractions of rights, critical positions that rapidly spread among the citizenry. Could this be the reason for his present ordeal?

According to the charge, the N400 million is a “proceed from the unlawful activities of the former NSA”. Analysts finds this flimsy and a no case for that matter given that no court of competent jurisdiction has convicted Dasuki for unlawful disbursement or declared the said N400 a proceed of unlawful activities.

However, it is a suppressed general impression among the populace that Metuh have been singled out for scourging for other reasons, especially given that though there are over 300 companies indicated by the Office of the National Security Adviser (ONSA) and though there are others arrested and arraigned well before Metuh was arrested, only him and his company have their case being galloped in the court.

Perhaps the answer has to do with his guts as the spokesperson of the opposition PDP, who has started taking the nation by the storm and put the government on its toes with his constant criticisms on the state of affairs of the nation.

It was no secret that Metuh spared no lines in heaping blames on the present administration for the sudden decline of the nation’s economy and attendant hardship on the citizens as well as challenging the government on issues of constitution violations and infractions of rights, critical positions that rapidly spread among the citizenry.

Could this be the reason for his present ordeal? Pundits appear to be persuaded that the system may be on a self-preservation mission requiring to find a quick way to rein-in, mortify, scourge and ultimately silence the loquacious opposition spokesperson who appeared to be rapidly getting Nigerians to accept they made a huge blunder in their voting preferences in the 2015 Presidential election.

Political watchers indeed find it an interesting coincidence that Metuh was arrested by operatives of the EFCC, who swooped on him on the morning of January 5, 2016, as he was about leaving his house for a scheduled world press conference on the state of the nation and violation of human rights in the country.

In his response to Oyegun, Metuh insisted that the President was wrong in pronouncing a guilty verdict on Col Sambo Dasuki and Nnamdi Kanu of Radio Biafra while they are still facing trial, as well as approving their continued incarceration despite being granted bail by the courts.  Metuh forcefully contended that such smacks of totalitarianism and utter disdain for the nation’s constitution and the rule of law. Metuh ended by saying thatBuhari was not God and that he would not be worshipped by Nigerians. Two days later, the EFCC came for him.

What many Nigerians do not know is that before the EFCC arrested Metuh, there have been other moves to silence him including a N500 million suit by Kaduna state Governor Nasir el Rrufai and another N500 million suit by then APC National Publicity Secretary and now Minister of Information, Alhaji Lai Mohammed for comments made in his press statements.

Also many Nigerians did not know that at the time Metuh was picked, the EFCC actually had nothing against him and kept him while looking for anything that can be used to nail him.

The fact is that Metuh became the only voice in the opposition circle speaking the minds of not only his party members but that of other Nigerians who are not happy with the goings on in the All Progressives Congress APC-led Federal Government.

Metuh made it a daily routine to pick hole in virtually all steps taken by President Muhammadu Buhari that tended to blackmail the immediate past President Goodluck Jonathan and PDP Federal Government.
Metuh became a sort of a tormentor-in-chief of President Buhari administration and through that he brought back life to his dying party through his convincing content delivery in arguments raised in his various statements and press conferences.

When the President appointed his brother who was a card carrying member of APC Lawan Daura as the head of the nation’s secret police, the DSS, which was supposed to be detached from politics, Metuh cried blue murder. When they challenged him to produce evidence that Daura was a member of APC, he went further in proving it with pictorials showing that he was a security member of the APC Presidential committee. Nothing again was heard on that matter.

Again when Hajia Amina Zakari, who is related to the President was made the Acting Chairman of the Independent National Electoral Commission (INEC), Metuh shouted and revealed the fact of nepotism, a noise which helped to frustrate her elevation as substantive Chairman of INEC. Aside being a relation of the President and this did not go down well with many powerful entities in the system.

When the the APC drew up a master plan to take over some PDP states in the South South and South East through the judiciary using the security agencies especially the DSS, he was on hand to bring the hatched plan to the fore and vanquished them.

It was also Chief Metuh who exposed the apparent unpreparedness of this government in handling serious economic challenges facing the nation. When the government presented its first budget, it was Metuh who saw the tomorrow in it and declared it a fraud long before the rest of Nigerians discovered the huge mess in the budget.

It became obvious that Metuh became the conscience of the nation because of the convincing deep contents contained in all his views for which people from the ruling party was not happy about.

Ostensibly unable to contain him, a conspiracy to take him out of circulation was hatched and when it was discovered that he received some money from the former government for PDP campaign publicity hell was let loose. Several other allegations were bandied by the EFCC including that he was given N1.4 billion and receiving monthly N4 million. When such could not be substantiated, they settled for the sum of N400 million which Metuh had earlier on his own announced to Nigerians that he collected from former President Jonathan for his job as the spokesman of the party ahead of the general election.

But to ensure that Metuh was taught a lesson, he was detained for 23 days; kept in EFCC cell and Kuje prison, handcuffed to a court and arraigned before a Judge, his former classmate with past frosty relationship and who appears to be in a hurry to jail him.

The question is; can the judiciary be bold to defend their independence and stand for truth and the law?