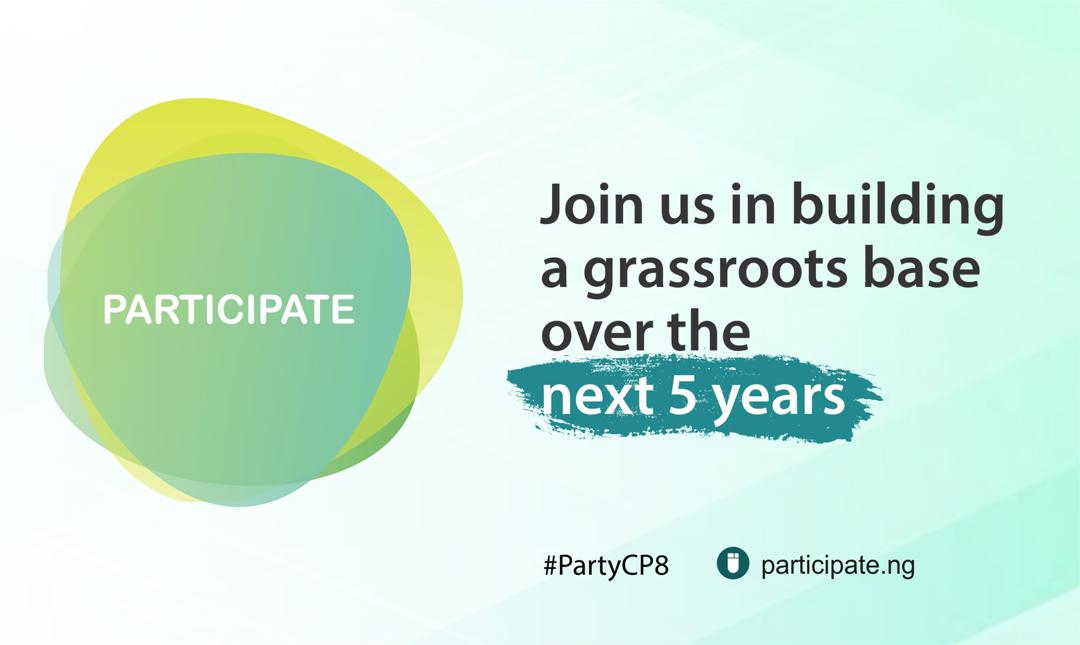 A group of young Nigerian professionals and emerging leaders have launched the Participate Movement (#PartyCP8) – an ideology driven campaign set to help inspire Nigerians towards participating more actively in their civic engagement duties, with particular focus on increasing the PVC collection rate of registered voters.

In a statement issued by Jude ‘Feranmi the group’s spokesperson on Tuesday, the group observed that Nigerian politics does not optimally work for the people and it is increasingly difficult to attract people with the right intentions.

“The kind of politics that is only geared for serve personal interests, funded by public treasury and marred with irregularities is not sustainable. Nigeria needs an urgent shift from the current style of politics that is bereft of ideology where platforms are just mere office-seeking spaces”, the group said.

The Participate Movement is poised to expand its numbers from a current team of twenty (20) young, ethnically diverse, patriotic Nigerians as it seeks to bring more Nigerians to its fold.

“Our movement is meant to show a new direction on how politics should be played. We are focused on increasing collection of Permanent Voters Cards in the short term, while we decide on a permanent political participation structure, after the 2019 polls.

“This is a political movement with the mission to redefine Nigerian politics by building a formidable grassroots base, ready to challenge for elections in the medium term. The Participate Movement is a gradualist approach to working the grassroots, enabling new leaders and the kind of politics that delivers economic empowerment for the citizens. The movement aims to build a network of committed funders – lower/middle class Nigerians – interested in participating in politics and funding an extensive grassroots network.

“We will work together on cultivating the trust of Nigerians in the grassroots and will be patient in enabling new leaders interested in creating local cells in selected states. Participate funding will be transparent to members as use of funds will be available to its members”, the group added.

The Participate Movement says it is determined to launch in at least ten (10) states before the end of the year, reaching over 2 million Nigerians through its data-driven strategy.

The group will begin its local community outreaches to encourage Nigerians to collect their Permanent Voters Card and prepare to participate in the next elections. Members of the public interested in joining the movement can do so on the movement’s website participate.ng