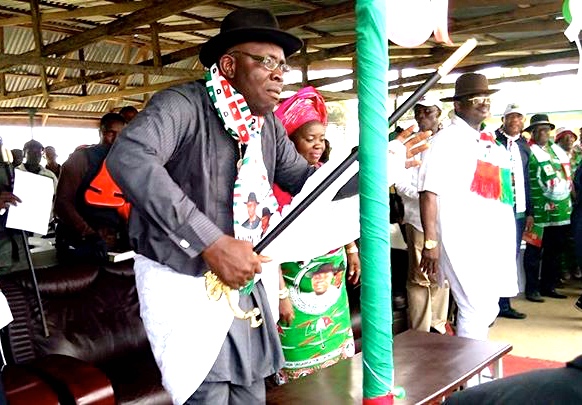 The Peoples Democratic Party (PDP) forewarns President Muhammadu Buhari to steer clear of Bayelsa governorship election and allow the will of the people to prevail, if he really desires to sustain the nation’s democracy.

PDP National Publicity Secretary, Chief Olisa Metuh in a statement on Sunday said intelligence information reaching the party shows that President Buhari is neck-deep in APC’s desperation to forcefully take over Bayelsa state, for which he has directed a covert military and other security operations to assist the APC to rig the election, which has already been won by the PDP.

“At the head of this illegal military operation is one Capt. Louis, who led the hijacking of elections in Southern Ijaw Local Government Area, the largest in the state. Military personnel have seized ballot materials including result sheets in Igbematiru, Peremabiri, ward 3, ward 6, ward 8, ward 12, ward 13 and ward 15, which they took to Ologbobiri in military gunboats, where massive thumb-printing is going on in favour of the APC. In Ward 7 Ekowe, the military hijacked and destroyed voting materials.

“During this operation, the ruthless personnel manhandled NYSC members serving as adhoc electoral officers, some of whom were thrown into the water and would have drowned if not for well-meaning Nigerians who rescued them.

“The PDP therefore states that the political development in Southern Ijaw is the worst in Nigeria’s electoral history and is no different from the military coup of December 31, 1983.

“Furthermore, we are aware that the on-going operation is intended to inflate figures in favor of the APC and cancel PDP’s obvious victory in this election. We therefore expect that INEC should not announce any cooked-up result coming from Southern Ijaw, which does not reflect the wishes and aspiration of the people.