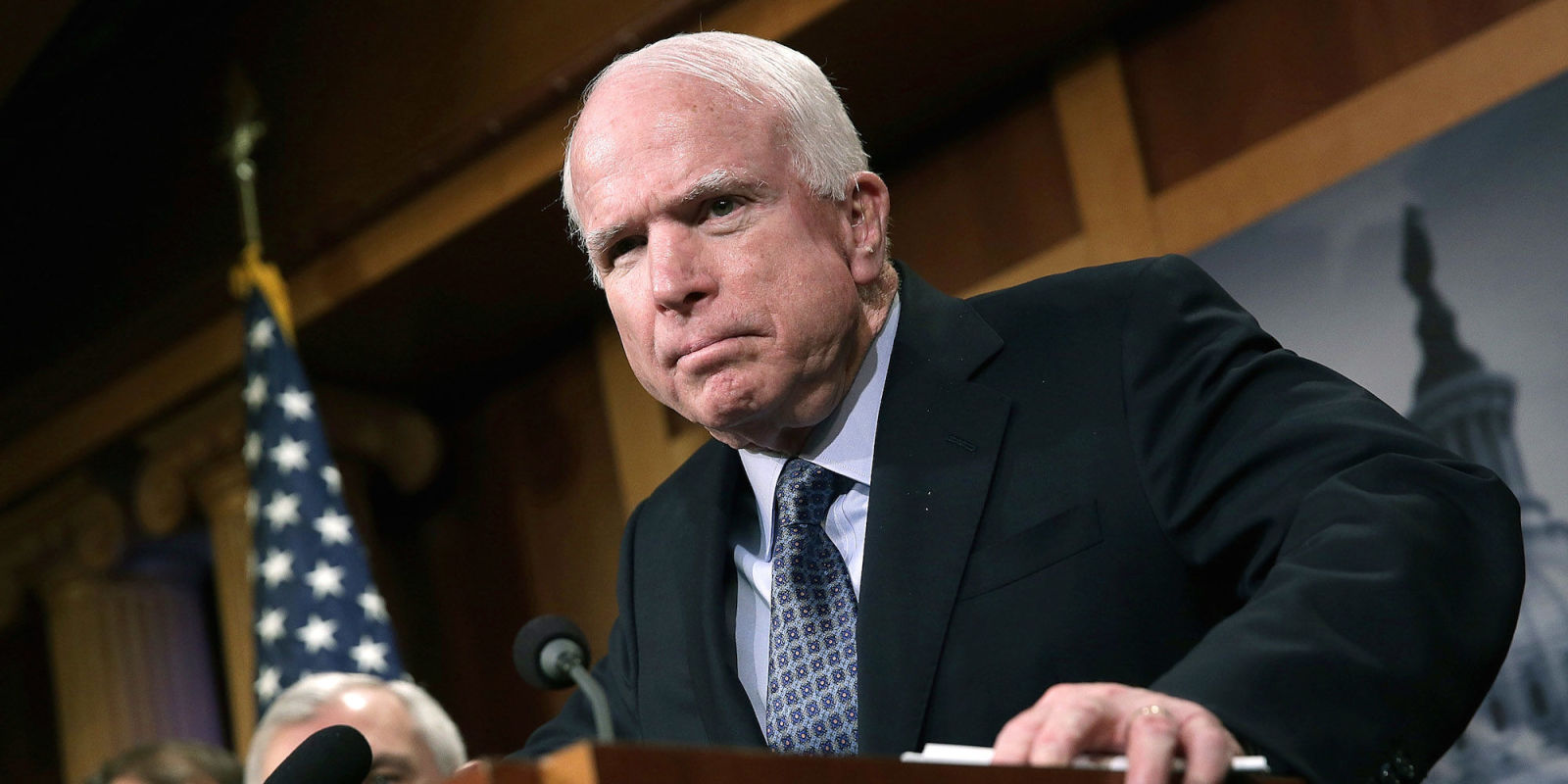 Senator John McCain, the Vietnam war hero turned presidential candidate, has died aged 81. Mr McCain died on Saturday surrounded by his family after battling brain cancer for more than a year, a short statement released by his office said. He was diagnosed with an aggressive brain tumour in July 2017 and had been undergoing medical treatment.

His family had announced that Mr McCain, who left Washington in December, had decided to stop treatment on Friday. Mr McCain’s daughter Meghan said the task of her lifetime would now be ‘to live up to his example, his expectations, and his love. ‘The days and years to come will not be the same without my dad – but they will be good days, filled with life and love, because of the example he lived for us,’ she wrote in a statement shared on Twitter. The six-term senator and 2008 Republican presidential nominee was diagnosed after doctors discovered his tumour during surgery to remove a blood clot from above his left eye last July. His family said he would lie in state in Phoenix, Arizona, and in Washington DC before a funeral at the Washington National Cathedral and his burial in Annapolis, Maryland.

Barack Obama, who beat Mr McCain in the 2008 presidential election, said the senator had shown what it meant ‘to put the greater good above our own’. He said despite their differences, they shared a “fidelity to something higher – the ideals for which generations of Americans and immigrants alike have fought, marched, and sacrificed”. Mr Obama said in the statement that the two political opponents ‘saw our political battles, even, as a privilege, something noble, an opportunity to serve as stewards of those high ideals at home, and to advance them around the world’. He wrote that they ‘saw this country as a place where anything is possible – and citizenship as our patriotic obligation to ensure it forever remains that way’. Mr McCain’s wife Cindy said she was heartbroken by the death of an ‘incredible man’. In a post on Twitter, she said: ‘My heart is broken. I am so lucky to have lived the adventure of loving this incredible man for 38 years. He passed the way he lived, on his own terms, surrounded by the people he loved, in the the place he loved best.’ Daughter Meghan McCain described her father as a ‘great fire who burned bright’.

Following the announcement of his death on Saturday evening, US president Donald Trump said his ‘deepest sympathies’ went to Mr McCain’s family. He tweeted: ‘My deepest sympathies and respect go out to the family of Senator John McCain. Our hearts and prayers are with you!’ Mr McCain was badly injured and spent more than five years as a prisoner of war after his plane was shot down on a bombing mission over North Vietnam in 1967. He was elected to the House of Representatives in 1982 and the Senate in 1986. A conservative on most issues, he pushed for campaign finance reform and the effort to account for those missing in Vietnam. He ran unsuccessfully for the Republican presidential nomination in 2000, then won it in 2008. But he and running mate Sarah Palin lost to Barack Obama.

In this article:Barack Obama, Donald Trump, John McCain, US