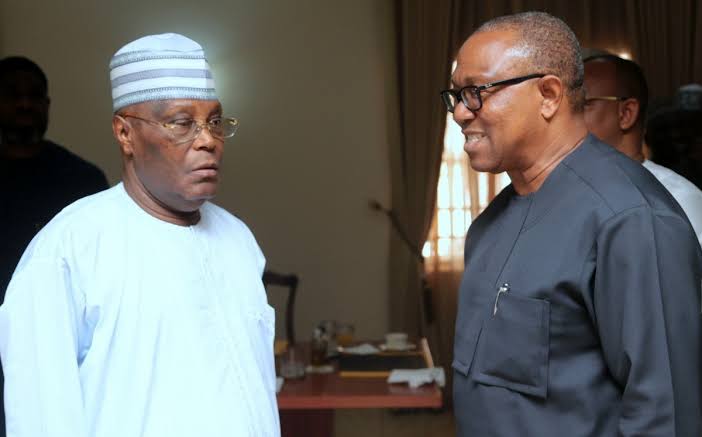 The Peoples Democratic Party’s Deputy Director, Media and Publicity, Presidential Management Committee, Mr Uloka Chibuike, has said that the supporters of the presidential candidate of the Labour Party, Peter Obi, are no longer confident in their ability to win the 2023 presidential election, Punch reports.

Chibuike said the Obidients are no longer at ease as they have been swept away because the status quo had changed for the PDP presidential candidate Atiku Abubakar’s sure victory in the 2023 presidential election.

He made the remarks in a statement made available to journalists in Awka on Wednesday.

Chibuike declared that at the moment, no presidential candidate had more support and acceptance in the country, especially in Anambra State, than the former vice president.

He added that in recent weeks, the PDP had welcomed hundreds of returning members and thousands of sympathisers from other political parties, with more expected to join Atiku’s crusade in the coming weeks.

The statement read in part, “With the 2023 presidential election a few months away, there is no doubt that Nigeria, especially Anambra State is gradually returning to the status quo with the PDP’s victory more probable.

“The PDP has taken over the streets, nooks and crannies of the country and the minority Labour Party supporters who are still standing with Peter Obi are no longer at ease or confident in their ability to win the election.

“The Obi strategy has long been manipulating our youths using lies, deceit, blackmail, sentiments and emotions. The life span of lies and deceit is short, and Obi’s unpopular Labour Party is currently suffering for support in Anambra State and other parts of the South-East, because his deceit has grown stale over time and lacks the strength to compete with the PDP’s influence and legitimacy in the state.

“Following the appointments and inauguration of the Presidential Council and Management Committee, led by the duo of Senator Ben Obi, CON, and Professor Obiora Okonkwo, OFR, who have through their leadership and daily engagements, rejuvenated the commitment of party faithful, affiliates and supporters, the PDP has become the only alternative in the state and is confident of delivering 85 percent of Anambra votes to Atiku in 2023.

“Election is about numbers, and so far, only the PDP can boast of the numbers to win the presidential election in the state.

“As more people are becoming aware of Peter Obi’s weakness in the nation’s polity and his inability to gain majority votes throughout different regions of the country, his mystification is no longer having the desired effect.

“Our people have abandoned Peter Obi and his endeavour to retrogress the South-East politically as they gradually come to the realisation that throwing away our votes won’t be best for the survival of Ndi-Igbo in the country’s politics.

“Like we have always done since 1999, Anambra State will no doubt return to status quo with the PDP and ensure that the state leads in front of the anticipated victory of the former vice president.

“Only a few of Peter Obi’s personal assistants, family members, and misguided individuals are left in his ineffective Labour Party, and their combined votes are inadequate to overthrow the PDP or challenge Atiku Abubakar’s victory in any local government of the state. Anambra is the LP’s to lose.”