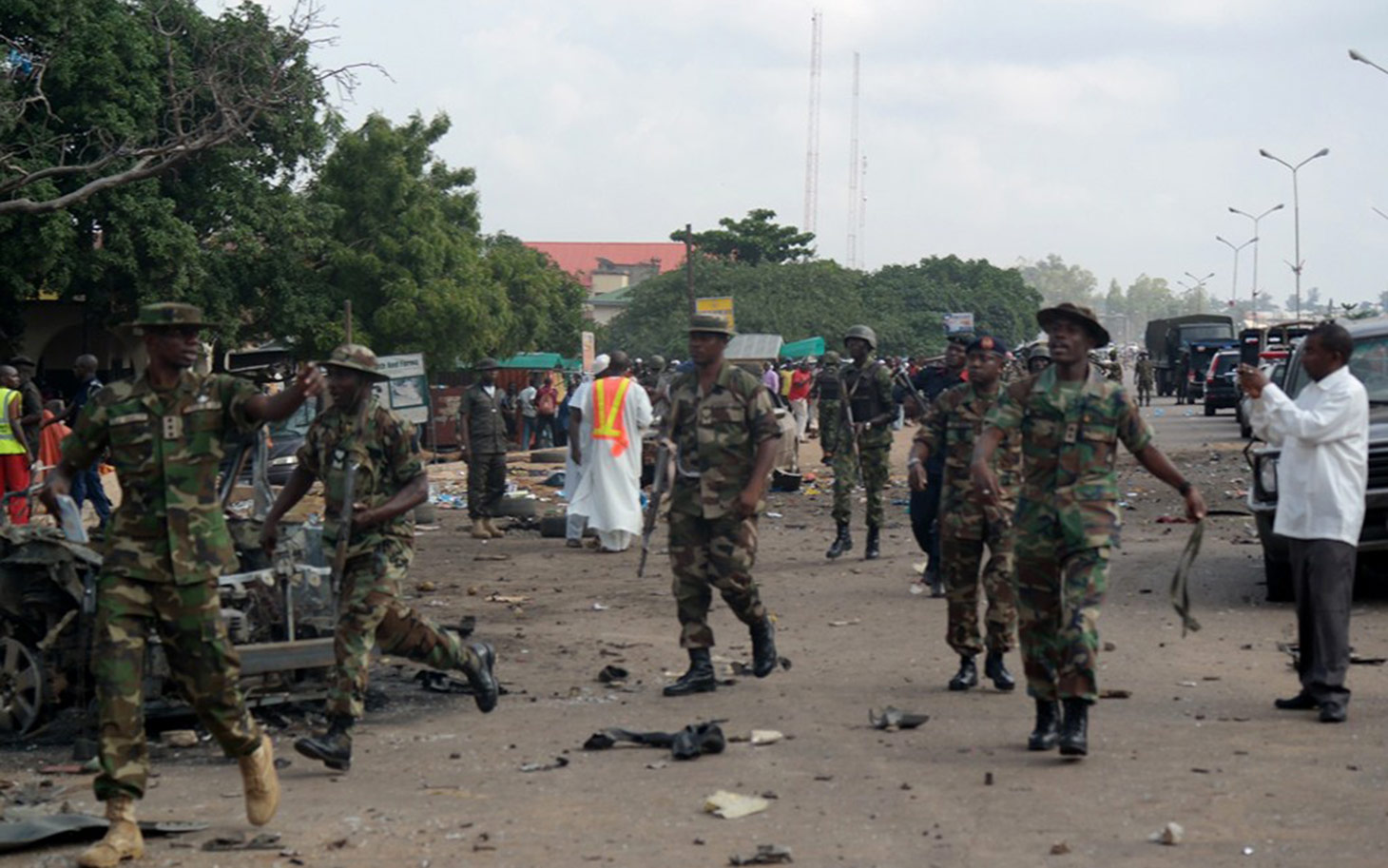 Military officers walk at a scene where a bomb exploded on July 23, 2014 in Kaduna, north of Nigeria. A second blast today in the city has killed at least 17 people, the national rescue agency said, after an earlier suicide attack in the city killed at least 25. An around-the-clock curfew was announced for the city after the bombings. AFP PHOTO / STRINGER (Photo credit should read -/AFP/Getty Images)

Five Nigerian soldiers have been killed and a number are missing after an ambush by Boko Haram’s Islamic State-backed faction, security sources said Sunday.

Fighters from Islamic State West Africa Province (ISWAP) on Friday opened fire on a column of civilian vehicles under military escort in the northeastern Borno State, according to the sources who requested anonymity.

The troops were escorting residents from the village of Sabon Garin Kimba in dozens of trucks to a camp in the town of Damboa about 50 kilometres (30 miles) away, according to a militia fighting against the jihadists alongside the army.

They were being evacuated from the village, which lies 130 kilometres from the state capital Maiduguri, ahead of a major military offensive against ISWAP, which has recently increased its activities in the area.

“We lost five soldiers in the ambush, two were wounded and several are missing, their fate still unknown,” said one military officer.

He said the attackers seized two military trucks and tried to immobilise an armoured vehicle by destroying its tyres but the driver managed to drive it to safety.

“As they approached Bungiri village ISWAP laid an ambush on the convoy. The troops engaged the terrorists in a gun battle and all civilians were able to escape but five soldiers were killed,” a second military source said.

A search and rescue operation was underway, the officer said.

Last month the jihadists raided a nearby military base in Mararrabar Kimba, killing five troops and stealing weapons, while some 30 troops are still listed as missing.

ISWAP has since July last year targeted dozens of military bases in attacks that have killed scores of soldiers.

On Monday, its fighters ransacked a base in the town of Gubio, 80 kilometres from Maiduguri, killing three soldiers, although the group claimed it killed 20 soldiers.

Boko Haram’s decade-long campaign of violence has killed 27,000 people and displaced around two million in Nigeria.

The violence has also spilt over into neighbouring Niger, Chad and Cameroon, prompting a regional military coalition to defeat the group.