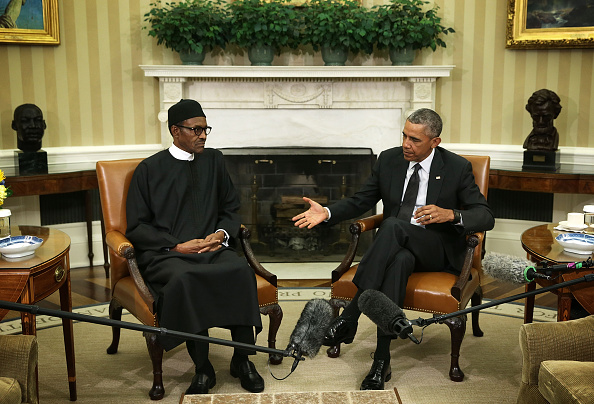 WASHINGTON, DC - JULY 20: (AFP OUT) U.S. President Barack Obama (R) extends his hand for a hand shake with Nigerian President Muhammadu Buhari (L) during a meeting in the Oval Office of the White House July 20, 2015 in Washington, DC. The two leaders were expected to discuss various topics including the fight against the Boko Haram terrorist group. (Photo by Alex Wong/Getty Images)

Nigerian President Muhammadu Buhari’s focus on combining a military offensive with the fight against poverty and corruption is the right approach in the battle against the Islamist militant group, Boko Haram, a senior U.S. defense official said.

“They understand military pressure by itself will not tackle the overall problem and understand the need for a truly integrated approach,” U.S. Deputy Assistant Secretary of Defense for African Affairs Amanda J. Dory said in an interview at the Pentagon in Washington. “This is something the previous Nigerian government said, and had strategy documents to articulate such an approach, but they weren’t actually implementing.”

Buhari beat President Goodluck Jonathan in elections this year after a campaign in which he pledged to end the threat of the insurgents who are trying to carve out an Islamic state in Africa’s biggest economy. He also promised to fight graft and narrow the gap between rich and poor.

The violence, mainly centered in Boko Haram’s stronghold of northeastern Nigeria, has killed thousands of civilians and displaced more than a million since 2009, stunting economic development in one of the country’s poorest regions and forcing schools and markets to close. The insurgency captured international attention in April 2014 when the militants kidnapped more than 200 schoolgirls in the town of Chibok, sparking a social media campaign known as #BringBackOurGirls for their return home. Most remain missing.

In this article:Boko Haram, Muhammadu Buhari, Nigeria, US