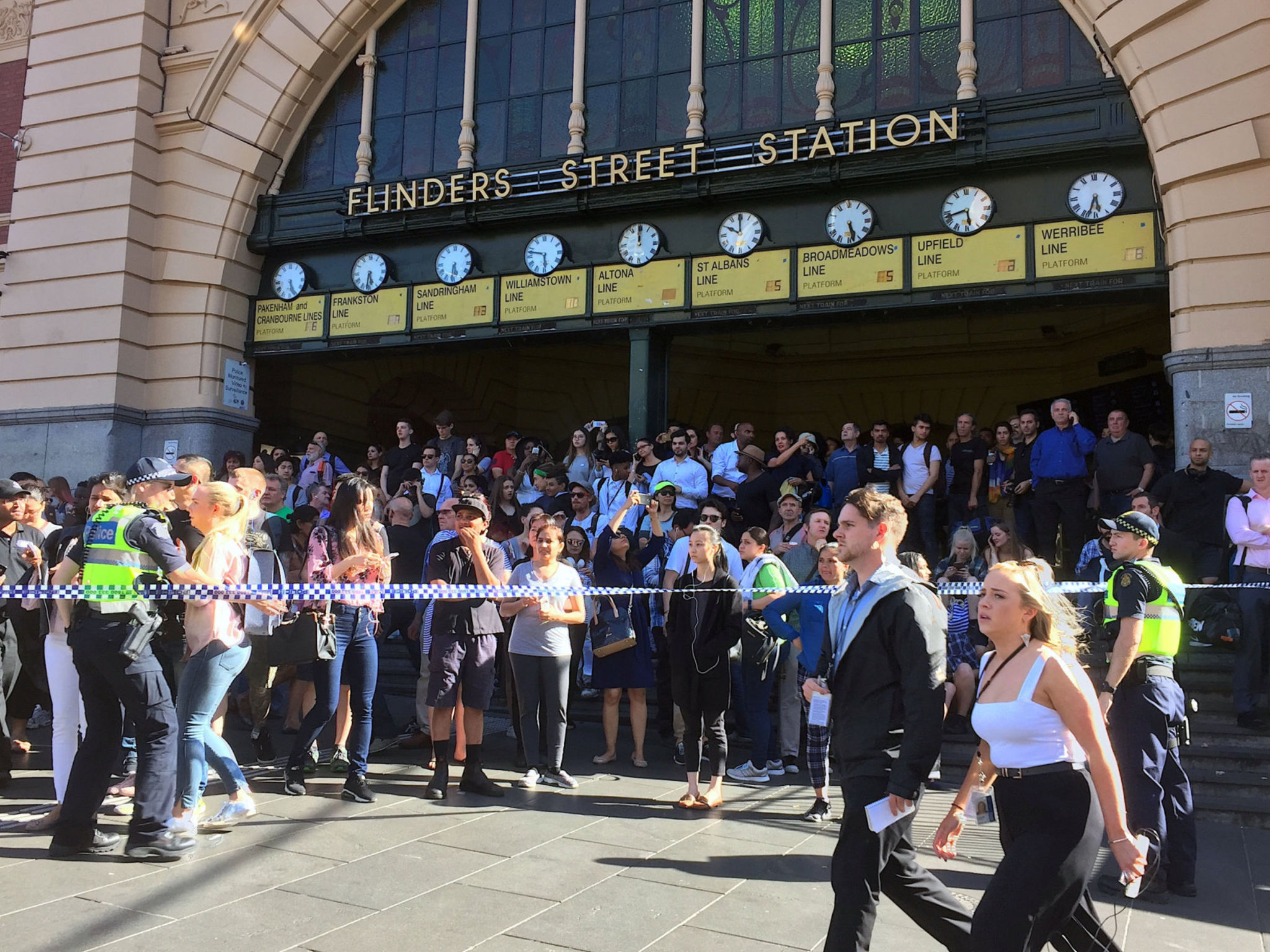 Members of the public stand behind police tape after Australian police said on Thursday they have arrested the driver of a vehicle that ploughed into pedestrians at a crowded intersection near the Flinders Street train station in central Melbourne, Australia December 21, 2017. REUTERS/Melanie Burton

As many as 19 people have been injured after a car deliberately drove into a crowd in central Melbourne, police have said.

Several of those hurt have been critically injured. The area is now in lock-down and officers have warned people to stay away.

Pictures from the scene show a white Suzuki SUV crashed into a bollard at a cable car stop.

Aerial footage shows injured people being treated by paramedics on the street of the large intersection near a busy major train station.

Victoria state police say they have arrested the driver of the vehicle after it “collided with a number of pedestrians” in the city centre.

Footage shot on a mobile phone at the scene shows the driver, with dark hair and a close-cropped beard, being wrestled to the ground and handcuffed by officers.

A man can be heard telling police “he was trying to run away”.

The man, who is wearing a white shirt and pale blue jeans appears to be unconscious as he lies on the floor.

Officers can be seen checking his pulse, and trying to revive him as they turn him onto his back by slapping his face.

The white SUV can be seen in the middle of the road with its passenger door wide open and its air bags deployed. The front of the car is completely crushed.

A second man, who was also believed to have been travelling in the car, was arrested by officers on the steps of the station.

The man, wearing jeans, a dark T-shirt and trainers can be seen lying on his side as three officers cuff him.

Injured people can also be seen lying on the floor being helped by members of the public, while sirens blare in the background as paramedics approach.

People at the scene have been described as “running towards” the injured on the ground the moment the incident took place.

Police say 14 people have been taken to hospital, a number of whom are in a critical condition.

One young child who has a head injury is said to be in a serious condition, Sky News Australia has reported.

Other people were treated at the scene for a range of different injuries. At the time of the crash, the area was packed with Christmas shoppers.

Reports differ as to the speed at which the car was travelling, with some describing it as not travelling fast, while others say i twas travelling at around 60mph.

“We could hear this noise, as we looked left, we saw this white car, it just mowed everybody down,” she said.

One witness told ABC TV, “There was no braking, there was no slowing down. Whether it was targeted or whether he had a heart attack, or was drunk, I don’t know.”

Another witness told ABC Radio Melbourne he saw a “SUV coming at high speed. (I) really just heard the collision with people with bags and what must be shopping trolleys – and I hope not prams,” he said.

Another witness said “hundreds of people” were told to get off trams near the area following the crash.

In this article:Australia, Crash, Melbourne, Police