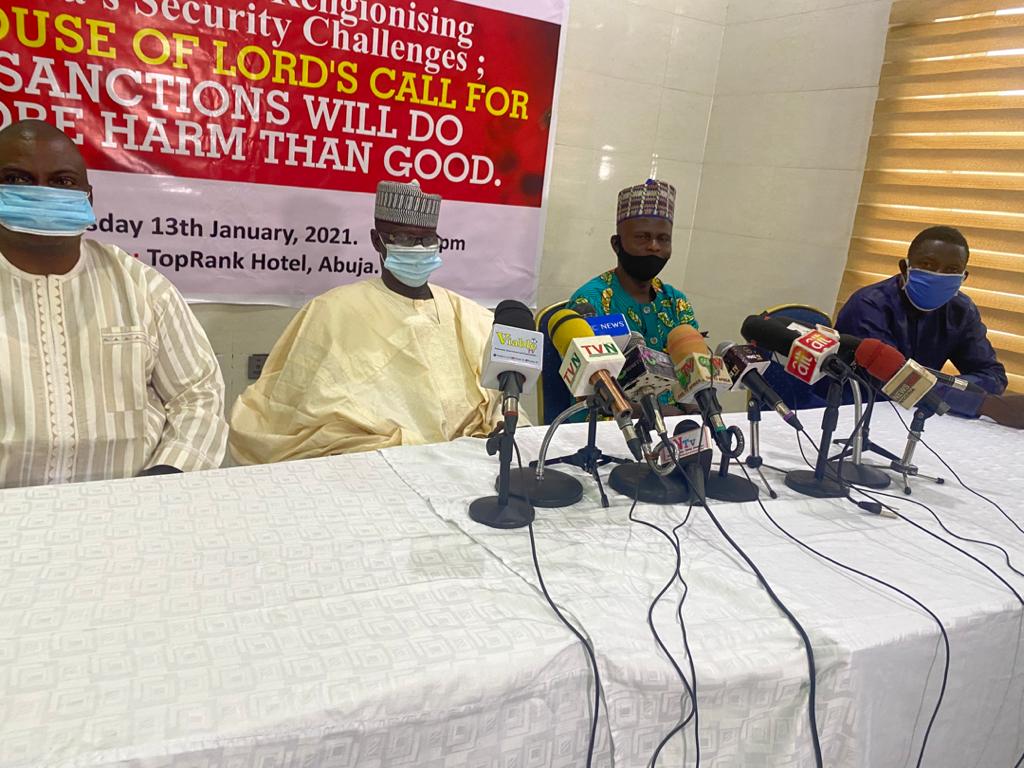 The Centre for International and Strategic Studies (CISS) has warned the House of Lords in the United Kingdom against attaching religion to Nigeria’s security challenges, as any sanction would do the country more harm than good.

The centre, which gave the warning in a press conference on Wednesday, in Abuja, also advised the British parliamentarians to be properly guided in their assessment, noting that any wrong move could lead to a crisis of unimaginable proportion.

In his address, special rapporteur, Professor Peter Maidoki rubbished the call by some lawmakers for sanction on Nigeria over an “erroneous report of the rising number of killings of Christians by terrorists and state actors”.

According to Prof Maidoki, it is wrong to reduce security threats in Nigeria to the fault lines of religion.

The special rapporteur noted that the current administration of President Muhammadu Buhari and his service chiefs have made the most impact in addressing the country’s security challenges and it is unfair to even mutter the idea of sanction.

Prof Maidoki added that both Christians and Muslims have been at the receiving end of the crisis in northern Nigeria.

The CISS, however, advised the House of Lords not to play into the hands of the terrorists based on the ignorance expressed in its report.

The centre further demanded that the lower chamber of the UK’s parliament treats the letter calling for sanctions on Nigeria in a similar manner the world rejected the invasion of the US Capitol.

Instead of such sanction, the CISS urged the parliamentarians and the entire world to join hands with Nigeria to stamp out terrorism.

You are aware that some members of United Kingdom House of Lords have called on the UK Government to apply sanctions on Nigeria based on an erroneous report of the rising number of killings of Christians by terrorists and state actors in Nigeria.

The call, which was contained in a letter to Dominic Raab, MP, UK’s Foreign Secretary, House of Commons, London, was signed by David Patrick Paul Alton, the Lord Alton of Liverpool, a Liberal Democratic member of UK Parliament; Caroline Annex Cox, a  cross-bench member of the UK House of Lords; and others but most remarkably, the former Nigeria President, Chief Olusegun Obasanjo.

We had thought that since one of our own is involved in writing the letter, that at least the UK parliamentarians would be properly guided in their assessment of the security situation in Nigeria.

Unfortunately, this has not been the case as we have seen traces of partisanship and deliberate attempts to twist facts to arrive at a predetermined conclusion.

The petitioners, rather than be objective in their analysis, reduced the entire Boko Haram terrorism and other criminal activities by armed groups to a religious conflict.

They also alleged cases of human rights abuses against a particular faith by the armed groups and state actors.

While it is true that more needs to be done about the security situation in Nigeria, it is definitely misleading to reduce the challenges to the fault lines of religion and to accuse the Nigerian military of either collusion or inaction or perpetrating human rights abuses.

The most uncharitable is to use such baseless allegations as a basis to call for sanctions against Nigeria.

This is most unfair because if there is an administration that has given the issue of security a deserved attention, it is the current administration of President Muhammadu Buhari.

Since May 2015 when the Buhari administration was inaugurated, it has taken bold steps to curb terrorism, insurgency and other crimes in the country hence cannot at all, be accused of sleeping on the matter.

Within the last year, the Nigerian military has neutralised over 2,000  terrorists across the northern part of the country, arrested over a hundred of their members and informants and destroyed their weapons and operational facilities.

This is in addition to major feats it recorded in the previous years which have restored normalcy to most parts of the region.

Nigerian troops, for instance, have entered the base of the terrorists at Sambisa Forest and captured their centre, called Camp Zero.

The troops have also recaptured territories seized  y terrorists including 20 local governments spread across the three states of Adamawa, Borno and Yobe and brought them back to Nigeria.

They have retaken captured military bases in  Bama, Monguno and Gwoza as well as recapturing territories captured by the terrorists while the efforts of the military have made it impossible for the insurgents to launch further attacks on communities.

Added to that, Nigeria’s annual military expenditure has grown from $1.8bn in 2016 to $2.1bn by 2021, at a compound annual growth rate of 3.73%, according to a report by Strategic Defence Intelligence.

To boost its preparedness and resolve to flush out the terrorists, the Nigerian Army last year purchased more equipment including the Chinese Rotary Wing AVIC AV500 drone to carry out ISR missions at medium altitude, carry out strikes and stay airborne for nine hours while fighting terrorists.

The Nigerian Chief of Army Staff, Lt. Gen Tukur Yusuf Buratai at a time, even relocated to the centres of the conflict and stayed in the trenches with troops until substantial damages were inflicted on the ranks of the terrorists.

The battle was so fierce against the terrorists that the leader of the Boko Haram terrorists, Abubakar Shekau was heard weeping in an audiotape about how his men have been subdued by Nigerian forces and had even considered surrendering.

For a government that has taken these steps and has made it a priority to defeat terrorism, it is most unfair for anyone to contemplate taking sanctions against them.

We recall that it was similar gestures based probably on such misleading reports that led the US government and other nations to stop selling weapons to Nigeria during the past administration which gave the insurgents an upper hand in the fight and enhanced their recruitment drive.

But the impression given by this letter is that the Nigerian Government is not doing anything about exterminating the problem.

We do not want the UK to be misled by the current report into believing that the Nigerian government is either lax about the situation or supporting the insurgents.

This is far from the truth.

The most misleading aspect of the letter is the claim that the attacks are purely religious and targeted at only Christians.

The letter reads in part: ‘’We write following the publication of a new report by Nigerian human rights group`, Intersociety (December 14, 2020,  Intersociety, an estimated 34,400 Christians have been killed in Nigeria since 2009 – including 17,000 by Boko Haram (and its splinter groups) and 15,500 by Fulani militia.”

We ask, what is the total number of people that have died as a result of terrorism in Nigeria since 2009 that only Christians would be up to 34,400.

We, therefore, a state without fear of contradiction that the report is not only misleading but is an attempt to incite the people against religious lines.

While some terrorists have tried to use primordial fault lines to instigate a large scale crisis in the country, it is wrong to conclude that the victims of the crises have been only Christians.

Attacks in the northern states and the Middle Belt have been visited on all persons in those areas irrespective of religious beliefs or ethnicity.

In fact, the demographics of the affected areas, indicate that non-Christians have been more at the receiving end of such atrocities like killings, rape, abductions, arson etc by the terrorists.

The areas worse affected by the attacks in the Northeast include the Northern and central parts of Borno State which are populated mainly by Muslims.

Same with the other parts of the Northeast like Yobe and Adamawa States.

In the Northwest, all the areas affected like Sokoto, Zamfara and Katsina with the probable exception of Kaduna State are almost hundred per cent Muslims.

Even in the Middle Belt states, the crisis cannot be termed religious as people of different faith in states like Niger, Nasarawa, Plateau and Benue have suffered similar fates.

It is also not true that Nigerian security forces have committed crimes against humanity and war crimes.

The Nigerian Army has conducted itself most professionally by always observing the rules on engagement.

The chief of Army Staff to check the few reported cases even set up a desk for civilians to report cases of abuse and since then there have been no reports of human rights violations.

We, therefore, consider the call for sanction against Nigeria based on these inexact and misleading reports as callous and unacceptable.

such calls aim to further polarise the people of the country and set them up against each other on religious lines which is exactly what the insurgents have been praying for.

The UK Government should not be based on the ignorance expressed in this report play into the hands of the terrorists.

We have seen how a young UK parliamentarian goofed when he said a former Nigerian Head of State stole the Central Bank.

This is one of such faux pax that should not be allowed to stand.

We demand that the same manner the world rebuffed the UK parliamentarian for getting his facts twisted should be applied here.

Furthermore, we demand that the manner  the world treated the invasion of US Capitol as despicable, should be the same way it treats this letter as it tends to violate the right of the people of Nigeria to be protected by its government and armed forces.

We call on all to join hands with Nigeria and the rest of the world to stamp out terrorism.

In this article:Centre for International and Strategic Studies (CISS), House of Lords 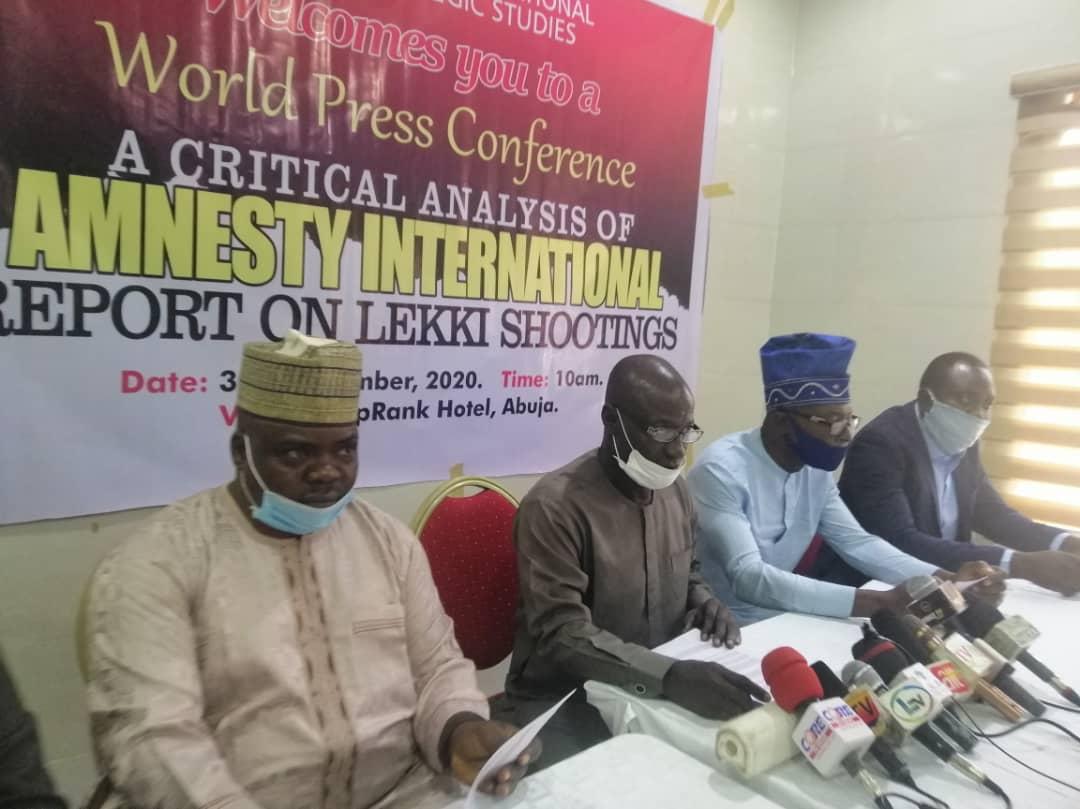 A special report has revealed that Amnesty International succumbed to social media exaggeration and fake news in its report on the Lekki toll gate...

President Muhammdu Buhari and the Nigerian military have been patted on the back for their concerted efforts towards ending terrorism in Nigeria. This is...