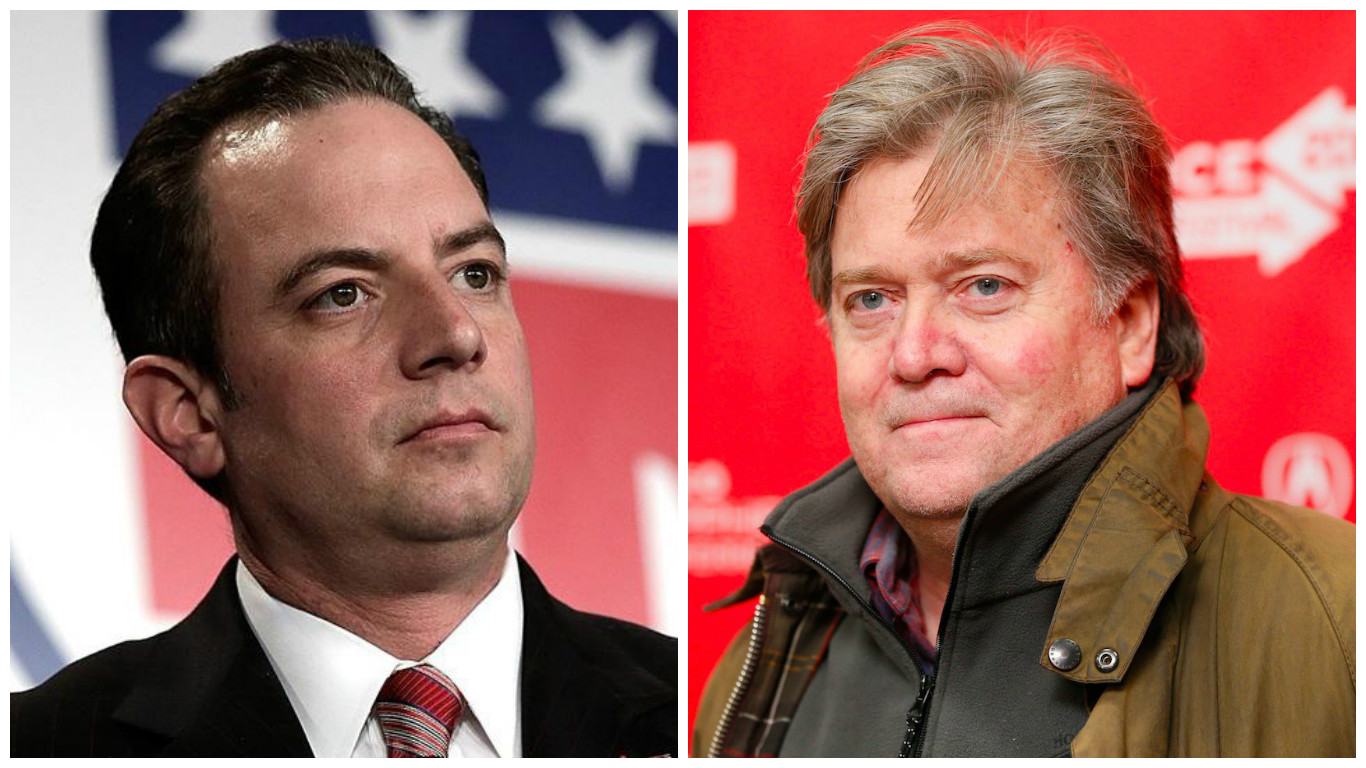 Donald Trump on Sunday named Reince Priebus as his White House chief of staff, rewarding a loyalist to his party and its long-serving chairman by making him his top aide in the Oval Office.

The Guardian reports that Trump, however, also named Steve Bannon, the head of his campaign and of the far-right website Breitbart, as his “chief strategist and senior counselor”.

The statement that announced Trump’s decision named Bannon first, despite the vague title of his role. It said that Bannon and Priebus would work as “equal partners”.

“Steve and Reince are highly qualified leaders who worked well together on our campaign and led us to a historic victory,” Trump said. “Now I will have them both with me in the White House as we work to make America great again.”

Bannon mentioned his “very successful partnership” with Priebus, who said in his own statement that the Trump White House would “work to create an economy that works for everyone, secure our borders, repeal and replace Obamacare and destroy radical Islamic terrorism”.

Priebus spent months trying to bring Republican leaders to terms with their party’s nominee, who often railed against them and drove several senior senators away with his mockery of disabled people and prisoners of war and boasts of groping women.

A fixture in Washington and Wisconsin politics since the mid-2000s, Priebus led the so-called “autopsy report” after Republicans failed to win the 2012 election, recommending efforts to win over Hispanic voters and women.

Throughout Trump’s chaotic and divisive campaign, he served as his diplomat to senior Republicans and donors, and as manager of the party resources to elect candidates around the country.

White House chief of staff is considered one of the most powerful positions in Washington, charged with helping the president in almost every task and operating the complicated machinery of government.

Bannon stands on the far right of the party, far from Priebus’ dedication to fiscal issues over social ones. A former Goldman Sachs executive and early investor in the sitcom Seinfeld, he has in the last few years headed Breitbart News, which has been accused by the Anti-Defamation League (ADL) of antisemitism, and whose stories regularly traffic in racist and sexist stereotypes and conspiracy theories.

The ADL’s chief executive, Jonathan Greenblatt, welcome Priebus’ appointment but said of Bannon’s: “It is a sad day when a man who presided over the premier website of the ‘alt-right’ – a loose-knit group of white nationalists and unabashed anti-Semites and racists – is slated to be a senior staff member in the ‘people’s house’.”

In 2007, Bannon’s ex-wife accused him of making antisemitic remarks, which he denied. In 1996 he was charged with domestic violence in a case that was eventually dismissed.

In August, The Guardian found that he was registered to vote in Florida, a key swing state, at an empty house where he did not live, in an apparent breach of election laws. Bannon subsequently changed his registration.

Bannon has repeatedly criticized Republicans, including House speaker Paul Ryan, for not moving far enough to the right.

Neither man has served in elected office, although Priebus, 44, has worked in government since 2004 and as Republican National Committee chairman since 2011.

Bannon has shied from the stage since taking over Trump’s campaign this summer, replacing former lobbyist Paul Manafort, who left after reports of his past ties to pro-Kremlin Ukrainian politicians.

Priebus continued to defend Trump throughout his many controversies this summer, and the businessman praised him during his victory speech on Tuesday.

“I never had a bad second with him,” Trump said. “He’s an unbelievable star.”