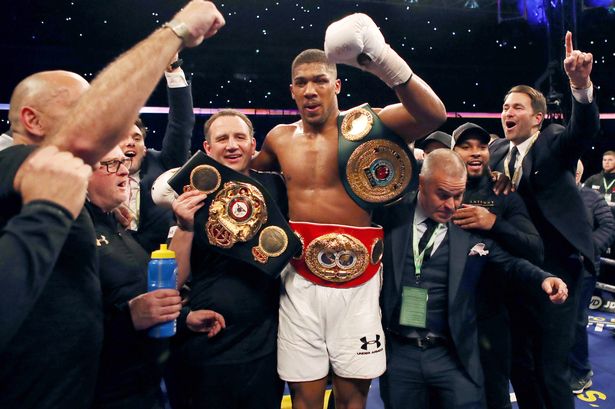 Minister of Information and Culture Alhaji Lai Mohammed  said  this in a statement on Tuesday.

He said government had  congratulated the  boxer, whose parents   are Nigerians, on his victory over   Ukrainian Wladimir Klitschko in London on Saturday.

”My heart is in Nigeria, My heart is in Britain. I am a Nigerian man by blood, yes,” the minister quoted Joshua as saying in a recent interview.

He added that the boxer in the interview  also listed the secret of his success as pounded yam, eba and egusi – all Nigerian cuisine.

Mohammed  hailed Joshua for his humility, despite his success in boxing. He also extolled his “undying spirit, coming off the canvas after he was knocked down by Klitschko in the sixth round to win by a Technical Knock Out in the 11th round of their pulsating fight”.

Also, the Senior Special Assistant to the President on Foreign Affairs and Diaspora, Abike Dabiri-Erewa, on Tuesday  commended  Joshua for winning  the  title.

Dabiri-Erewa, in  a statement  by Special Assistant on Media, Abdurrahman Balogun, said Joshua’s victory was a pride to Africa.

She said, “We are truly proud of you and urge you to continue to use your professional prowess to extol the virtues of Nigerian heritage. Your shinning beacon serves as inspiration to the youth of Nigeria.

“Your victory is also a testimony that Nigerians contribute in many ways to the development of the country and the continent as a whole.”

The Presidential aide noted that despite the challenges being faced by the 27-year-old  in his chosen career, he remained focused and did not lure himself into any criminality.