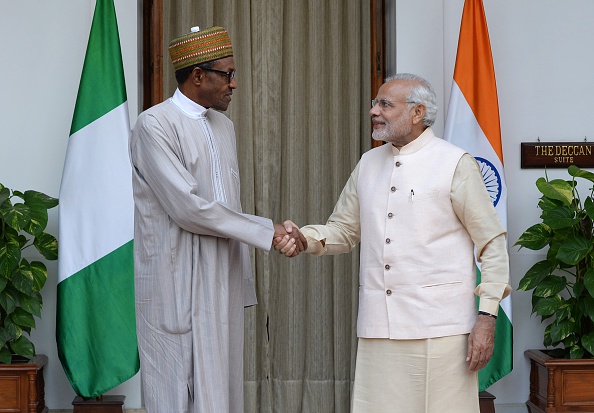 Nigeria's President Muhammadu Buhari (L) shakes hands with India's Prime Minister Narendra Modi during their meeting at the India-Africa Forum Summit in New Delhi on October 28, 2015. The event, postponed since December over the Ebola crisis, is the first under Indian Prime Minister Narendra Modi and is the biggest gathering of foreign dignitaries in the country since 1983 with some 1,000 delegates. AFP PHOTO / PRAKASH SINGH (Photo credit should read PRAKASH SINGH/AFP/Getty Images)

“We have secured the release of five Indian sailors from pirates in Nigeria,” Sushma Swaraj tweeted.

The five sailors were kidnapped on December 11 in Warri, Nigeria.

On December 18, the minister said India’s High Commissioner to Nigeria A.R. Ghanashyam met Nigerian President Muhammadu Buhari on the matter and that the sailors were safe.

“I appreciate the good work done by our High Commissioner Ghanashyam,” Sushma Swaraj said in another tweet.

She thanked President Buhari for securing the release of the captive sailors.

In this article:India, Nigeria, Sailors