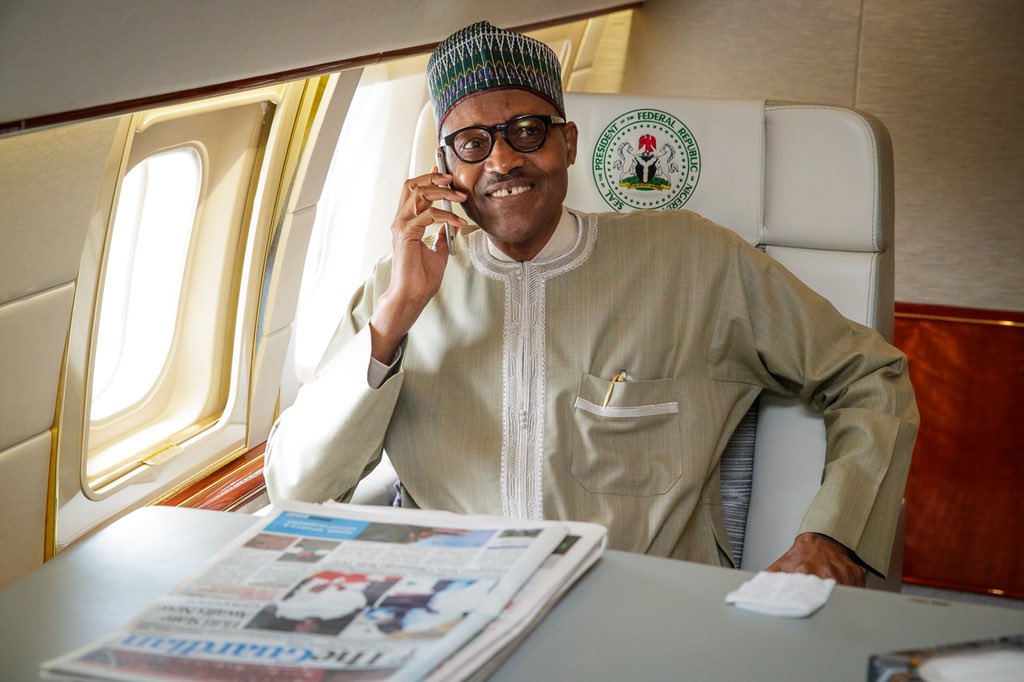 Nigeria's President Muhammadu Buhari aboard one of the country's presidential jets

Some foreign airlines operating in Nigeria are set to halt their operations by December should the Federal Government fail to remit their over $600million trapped in the Central Bank of Nigeria (CBN).

The President of the National Association of Nigeria Travel Agencies (NANTA), Mrs Suzan Akporiaye, disclosed this, adding that some of the affected foreign carriers had already informed her of plan to shut down their operations in Nigeria as a way of avoiding a further increase in the amount of their trapped funds, Tribune reports.

Akporiaye said, “I don’t know whether the government wants the situation to be so bad that the airlines have to stop flying to Nigeria, this is just the beginning, Emirates just started it but there are plans from other airlines from information reaching me, other foreign airlines are planning the same thing. Like I said you wouldn’t blame them, some of the airlines are saying that if by December there is no improvement that they will stop flying into Nigeria, but does our government want to wait for that to happen before they start running around?

“Emirates attributed reasons for its suspension of flights to the lack of improvement in the situation. Nobody is talking to the foreign airlines, even the minister of aviation is not talking to them to even let the airlines know if the government is doing something to mitigate what is going on. It’s a sad situation that we shouldn’t have allowed to get to this stage.”

The development comes as Emirates airlines recently announced it was stopping its operations into Nigeria effective September 1, 2022, to protest its accrued revenue amounting to $85million stuck in Nigeria.

According to information gathered, the pullout of Emirates may be the beginning of the total collapse of the country’s international air transport as majority of the airlines have given the government up till December to release their trapped funds or have them withdraw their services from Nigeria.

Speaking on the announcement by Emirates to suspend flights into Nigeria, the NANTA president expressed reservations about the lack of patience displayed by the UAE airlines before deciding to pull its operations out of the country. She, however, pushed the blame on the federal government.

“Remember the Bilateral Air Service Agreements (BASA) signed between the foreign countries of the airlines and Nigeria says the airlines must be able to repatriate their funds unhindered and Nigeria as a country has not been complying with that and because Nigeria is not complying with that part of the BASA agreement, the airlines have every right to take any step they want to take even to the extent of stopping their flights into and out of Nigeria, yes they do.

“We have failed in our own part of the agreement, we need to accept that it is the fault of the Nigerian government as it is but then they have to quickly come out to mitigate the crisis that is looming and staring us in the face. In fact, we are already in the crisis, we are touching it already as it is and how can they address this, is that let the government put the airlines’ funds on their priority list. So as it is now, we all know there is a global crisis no doubt and Nigeria like every other country is not exempted.

“Ours is just a peculiar case because of our population and Nigerians really travel and so ours will always be worse than any other country, look at the statistics, it’s not only Nigeria that has airlines’ trapped funds, it’s just that Nigeria has the highest so it’s a global crisis everywhere. What the government should do is to put the airlines funds on the priority list, call them for a meeting and let them know this is what you are about to do, telling them you will be able to get them certain percentage of their trapped funds and if the airlines hear this from government they will soft-pedal.”

Speaking on why the airlines need to be placed on the priority list, Akporiaye premised her position on the fact that there were benefits inherent in having foreigners coming to invest and do business in Nigeria, Such foreigners, she said, come to spend foreign currency and not Naira.