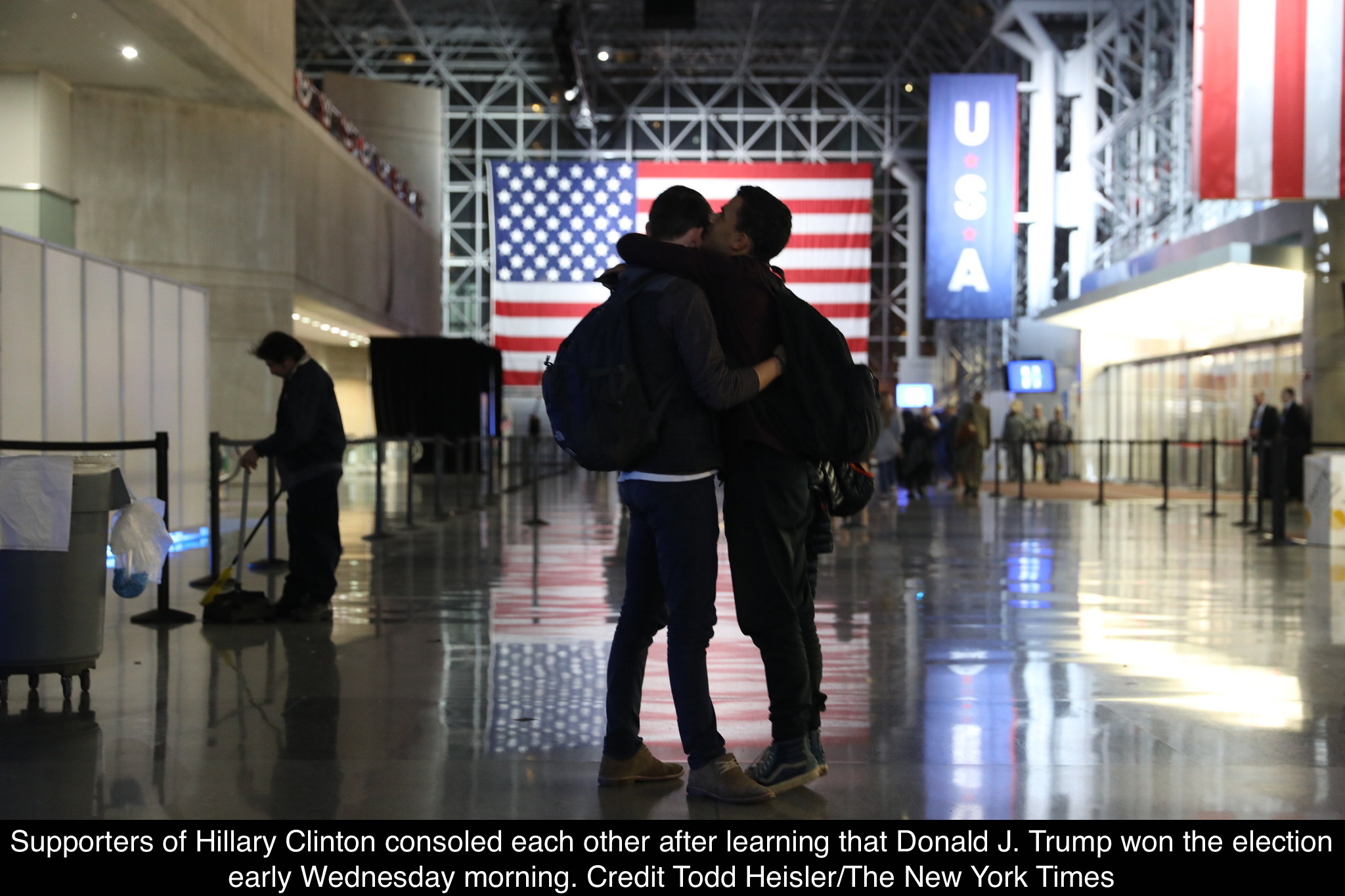 The election of Donald Trump to the Presidency is nothing less than a tragedy for the American republic, a tragedy for the Constitution, and a triumph for the forces, at home and abroad, of nativism, authoritarianism, misogyny, and racism. Trump’s shocking victory, his ascension to the Presidency, is a sickening event in the history of the United States and liberal democracy. On January 20, 2017, we will bid farewell to the first African-American President—a man of integrity, dignity, and generous spirit—and witness the inauguration of a con who did little to spurn endorsement by forces of xenophobia and white supremacy. It is impossible to react to this moment with anything less than revulsion and profound anxiety.

There are, inevitably, miseries to come: an increasingly reactionary Supreme Court; an emboldened right-wing Congress; a President whose disdain for women and minorities, civil liberties and scientific fact, to say nothing of simple decency, has been repeatedly demonstrated. Trump is vulgarity unbounded, a knowledge-free national leader who will not only set markets tumbling but will strike fear into the hearts of the vulnerable, the weak, and, above all, the many varieties of Other whom he has so deeply insulted. The African-American Other. The Hispanic Other. The female Other. The Jewish and Muslim Other. The most hopeful way to look at this grievous event—and it’s a stretch—is that this election and the years to follow will be a test of the strength, or the fragility, of American institutions. It will be a test of our seriousness and resolve.

Early on Election Day, the polls held out cause for concern, but they provided sufficiently promising news for Democrats in states like Pennsylvania, Michigan, North Carolina, and even Florida that there was every reason to think about celebrating the fulfillment of Seneca Falls, the election of the first woman to the White House. Potential victories in states like Georgia disappeared, little more than a week ago, with the F.B.I. director’s heedless and damaging letter to Congress about reopening his investigation and the reappearance of damaging buzzwords like “e-mails,” “Anthony Weiner,” and “fifteen-year-old girl.” But the odds were still with Hillary Clinton.

All along, Trump seemed like a twisted caricature of every rotten reflex of the radical right. That he has prevailed, that he has won this election, is a crushing blow to the spirit; it is an event that will likely cast the country into a period of economic, political, and social uncertainty that we cannot yet imagine. That the electorate has, in its plurality, decided to live in Trump’s world of vanity, hate, arrogance, untruth, and recklessness, his disdain for democratic norms, is a fact that will lead, inevitably, to all manner of national decline and suffering.

In the coming days, commentators will attempt to normalize this event. They will try to soothe their readers and viewers with thoughts about the “innate wisdom” and “essential decency” of the American people. They will downplay the virulence of the nationalism displayed, the cruel decision to elevate a man who rides in a gold-plated airliner but who has staked his claim with the populist rhetoric of blood and soil. George Orwell, the most fearless of commentators, was right to point out that public opinion is no more innately wise than humans are innately kind. People can behave foolishly, recklessly, self-destructively in the aggregate just as they can individually. Sometimes all they require is a leader of cunning, a demagogue who reads the waves of resentment and rides them to a popular victory. “The point is that the relative freedom which we enjoy depends of public opinion,” Orwell wrote in his essay “Freedom of the Park.” “The law is no protection. Governments make laws, but whether they are carried out, and how the police behave, depends on the general temper in the country. If large numbers of people are interested in freedom of speech, there will be freedom of speech, even if the law forbids it; if public opinion is sluggish, inconvenient minorities will be persecuted, even if laws exist to protect them.”

Trump ran his campaign sensing the feeling of dispossession and anxiety among millions of voters—white voters, in the main. And many of those voters—not all, but many—followed Trump because they saw that this slick performer, once a relative cipher when it came to politics, a marginal self-promoting buffoon in the jokescape of eighties and nineties New York, was more than willing to assume their resentments, their fury, their sense of a new world that conspired against their interests. That he was a billionaire of low repute did not dissuade them any more than pro-Brexit voters in Britain were dissuaded by the cynicism of Boris Johnson and so many others. The Democratic electorate might have taken comfort in the fact that the nation had recovered substantially, if unevenly, from the Great Recession in many ways—unemployment is down to 4.9 per cent—but it led them, it led us, to grossly underestimate reality. The Democratic electorate also believed that, with the election of an African-American President and the rise of marriage equality and other such markers, the culture wars were coming to a close. Trump began his campaign declaring Mexican immigrants to be “rapists”; he closed it with an anti-Semitic ad evoking “The Protocols of the Elders of Zion”; his own behavior made a mockery of the dignity of women and women’s bodies. And, when criticized for any of it, he batted it all away as “political correctness.” Surely such a cruel and retrograde figure could succeed among some voters, but how could he win? Surely, Breitbart News, a site of vile conspiracies, could not become for millions a source of news and mainstream opinion. And yet Trump, who may have set out on his campaign merely as a branding exercise, sooner or later recognized that he could embody and manipulate these dark forces. The fact that “traditional” Republicans, from George H. W. Bush to Mitt Romney, announced their distaste for Trump only seemed to deepen his emotional support.

The election of Donald Trump to the Presidency is nothing less than a tragedy for the American republic, a tragedy for the Constitution, and a triumph for the forces, at home and abroad, of nativism, authoritarianism, misogyny, and racism. Trump’s shocking victory, his ascension to the Presidency, is a sickening event in the history of the United States and liberal democracy. On January 20, 2017, we will bid farewell to the first African-American President—a man of integrity, dignity, and generous spirit—and witness the inauguration of a con who did little to spurn endorsement by forces of xenophobia and white supremacy. It is impossible to react to this moment with anything less than revulsion and profound anxiety.

The commentators, in their attempt to normalize this tragedy, will also find ways to discount the bumbling and destructive behavior of the F.B.I., the malign interference of Russian intelligence, the free pass—the hours of uninterrupted, unmediated coverage of his rallies—provided to Trump by cable television, particularly in the early months of his campaign. We will be asked to count on the stability of American institutions, the tendency of even the most radical politicians to rein themselves in when admitted to office. Liberals will be admonished as smug, disconnected from suffering, as if so many Democratic voters were unacquainted with poverty, struggle, and misfortune. There is no reason to believe this palaver. There is no reason to believe that Trump and his band of associates—Chris Christie, Rudolph Giuliani, Mike Pence, and, yes, Paul Ryan—are in any mood to govern as Republicans within the traditional boundaries of decency. Trump was not elected on a platform of decency, fairness, moderation, compromise, and the rule of law; he was elected, in the main, on a platform of resentment. Fascism is not our future—it cannot be; we cannot allow it to be so—but this is surely the way fascism can begin.

Hillary Clinton was a flawed candidate but a resilient, intelligent, and competent leader, who never overcame her image among millions of voters as untrustworthy and entitled. Some of this was the result of her ingrown instinct for suspicion, developed over the years after one bogus “scandal” after another. And yet, somehow, no matter how long and committed her earnest public service, she was less trusted than Trump, a flim-flam man who cheated his customers, investors, and contractors; a hollow man whose countless statements and behavior reflect a human being of dismal qualities—greedy, mendacious, and bigoted. His level of egotism is rarely exhibited outside of a clinical environment.

For eight years, the country has lived with Barack Obama as its President. Too often, we tried to diminish the racism and resentment that bubbled under the cyber-surface. But the information loop had been shattered. On Facebook, articles in the traditional, fact-based press look the same as articles from the conspiratorial alt-right media. Spokesmen for the unspeakable now have access to huge audiences. This was the cauldron, with so much misogynistic language, that helped to demean and destroy Clinton. The alt-right press was the purveyor of constant lies, propaganda, and conspiracy theories that Trump used as the oxygen of his campaign. Steve Bannon, a pivotal figure at Breitbart, was his propagandist and campaign manager.

It is all a dismal picture. Late last night, as the results were coming in from the last states, a friend called me full of sadness, full of anxiety about conflict, about war. Why not leave the country? But despair is no answer. To combat authoritarianism, to call out lies, to struggle honorably and fiercely in the name of American ideals—that is what is left to do. That is all there is to do.

Culled from The New Yorker

In this article:America, Barack Obama, Donald Trump, US