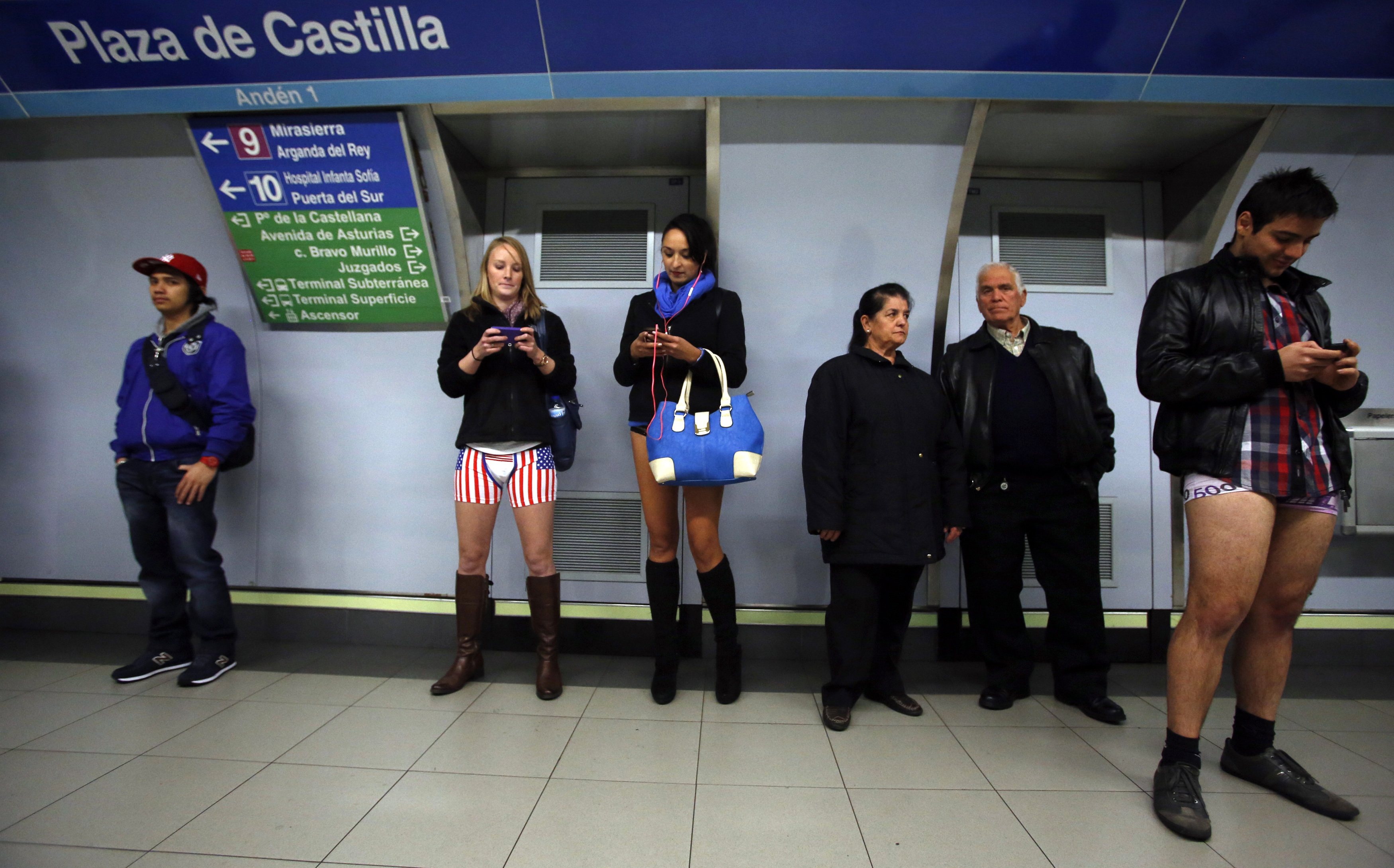 Passengers without their pants check their mobile phones as they wait for a train during the "No Pants Subway Ride" event at Plaza de Castilla subway station in Madrid January 12, 2014. The event involves participants who strip down to their underwear as they go about their normal routine, and occurs in different cities around the world in January, according to its organisers. REUTERS/Sergio Perez (SPAIN - Tags: TRANSPORT SOCIETY)

In her latest book, Reclaiming Conversation: The Power of Talk in a Digital Age, clinical psychologist and MIT professor, Sherry Turkle, claims texting and mobile phones are not only killing conversation but empathy as well.

Recent studies demonstrate the presence of a mobile phone – on a table or at the perimeter of our vision – not only alters the nature of conversation but the degree of connection felt between participants.

According to Turkle, the mere sight of a phone made people stick to topics where they wouldn’t mind being interrupted. The upshot of this is they don’t feel invested in each other.

“Even a silent phone disconnects us,” she says.

Think about how many times you’ve placed your phone in a prominent position when on a date/outing/at a meeting/party/function/dinner with family etc.

How often have you interrupted a conversation by answering a call or text, checking emails, uploading a selfie, or updating a Facebook status?

Many of us stand guilty as charged.

Calling us to account, Turkle is also quick to declare she’s not anti-texting or tweeting or social media. But she is pro-conversation.

Something she feared we were losing the art of only a few years ago.

In her 2012 Ted Talk – given to coincide with the release of her then latest book, Alone Together: Why We Expect More From Technology and Less From Each Other – she chooses to both empower and caution us regarding our dependency on technology and the growing role it is playing in lives.

SPINAL TAP: Check out what mobile phones are doing to you

HOLD THE PHONE: The physical toll of constantly being on call

She discusses how mobile technology and social media are not only changing what people do but also how we behave.

Actions that would have seemed strange only a few years earlier were now practically de rigueur. She gave examples such as checking emails or texting during meetings, parliament, in the classroom, lecture hall, even at funerals.

She also spoke of how kids were bemoaning the fact their parents would defer to their devices at mealtimes rather than interact with them. These same kids were then pulling out their phones and texting even when other friends were present.

We’ve all seen the memes, the videos, we can pull out endless anecdotes of old and young sitting together on public transport, in restaurants, at school, heads down, thumbs and fingers busy rather than talking to each other.

Last week, reports children’s spines were being affected due to heavy texting emerged.

Craving connection, we’re sacrificing real conversation to achieve it. We opt for the illusion of companionship (through people noticing our status updates and “liking” them; responding to a Tweet or photo) rather than enjoying the benefits of actual friendship.

Try to strike up a conversation with a stranger on public transport or the street and if you’re not suspected as a potential criminal, you’re likely to be branded “a weirdo”. Turkle believes this happens because, as her recent book explores, our ability to empathise is in decline – especially among young people.

Empathy is the capacity to identify with someone else’s pain: to walk in their shoes and understand their suffering at a deep and personal level.

Though the two are often conflated, sympathy is different. Sympathy is the ability to feel sorrow or distress for another’s misfortune etc.

Of course, social media is not the only cause of this loss. One has only to look to some of our leaders, certain elements in the tabloid media, the trolls and bullies who lurk in cyberspace and their attitudes to understand lack of empathy is not exclusive to younger generations or the fault of technology alone.

Afraid of intimacy and yet of being lonely, we’ve not only forgotten how to talk to each other properly – with all the messy, fun, uncomfortable and rewarding aspects a dialogue of give and take involves (including the silences) – and with respect, we’ve also forgotten how to feel comfortable with being alone.

When we’re alone, we have the opportunity to self-reflect.

Self-reflection involves having a conversation with yourself; quietly examining dreams, desires and purpose as well as searching for ways to improve and understand ourselves.

Instead of seeking out time alone we have, as Turkle says, “turned it into a problem that needs to be solved with technology”.

And we’ve taught this to our kids. We’re persuaded being alone is a gap in a schedule needing to be filled.

The easiest way to do this is by deferring to the phone. That magic little device contains a world of “friends” and what passes for “conversation”.

Only, they’re not really either.

As Turkle points out: We don’t need to turn away from our devices but we do need to become more self-aware about the way we use them and the impact this is having on us, our kids and our real world relationships.

In other words, it’s time for a little more conversation.

In this article:Karen Brooks, Mobile Phones 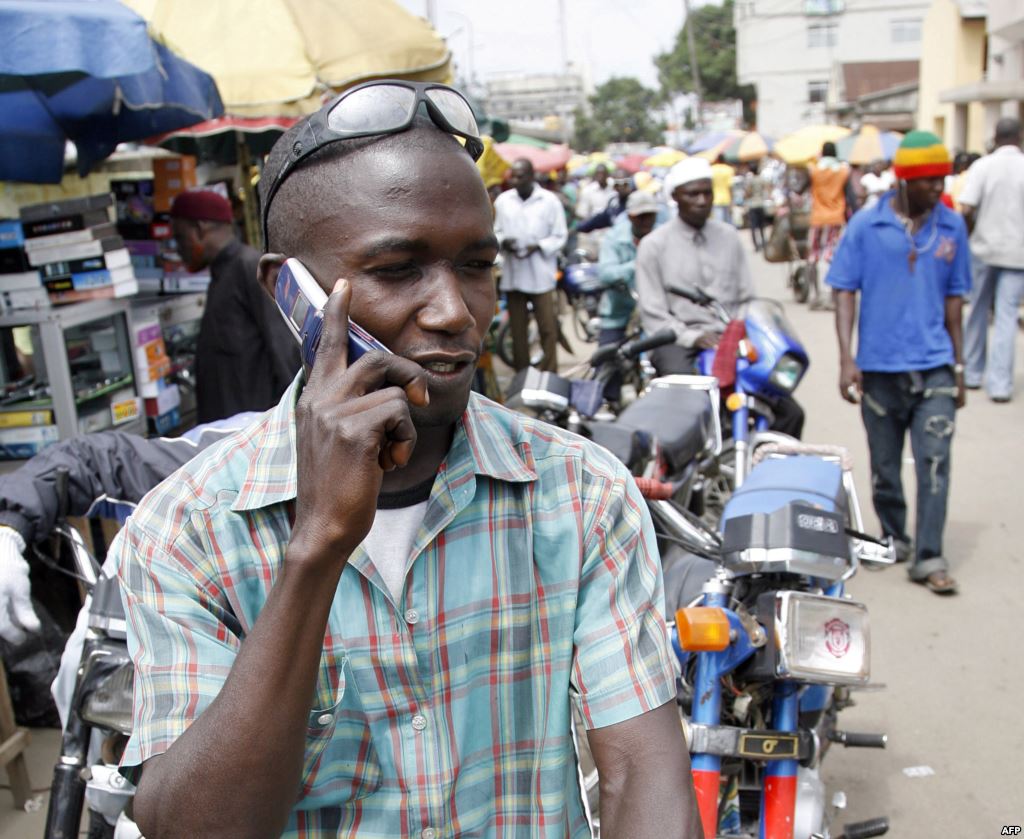 Kingsley Kanayo Active lines in the country increased to over 152 million in the month of November 2015, the Nigerian Communications Commission (NCC) has...