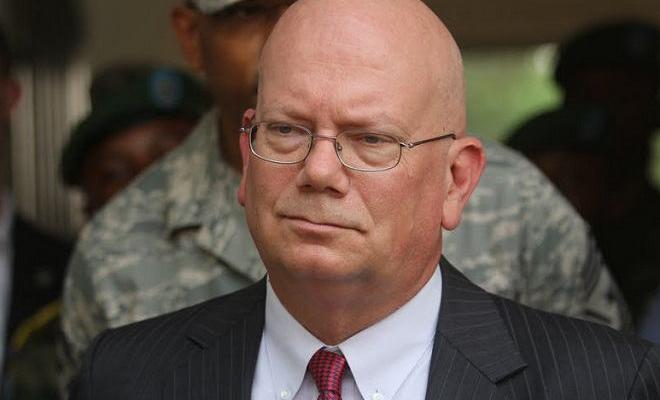 United States of America Ambassador to Nigeria, James Entwistle, has stated that despite declining economy, Nigeria is not a poor nation and requires no handouts but a partnership that works.

Entwistle said Nigeria’s immediate past president, Dr. Goodluck Jonathan, had in June 2013 performed a groundbreaking ceremony for General Electric, GE’s $1 billion service and manufacturing facility in Calabar, after a Memorandum of Understanding, MoU, between the Nigerian government and the firm.

Chief Executive Officer to General Electric, Dr. Lazarus Angbazo, stated that the manufacturing company’s citing of the structure in Calabar was to strengthen the company’s local presence in Nigeria.

Entwistle, who was earlier at the American Corner in Calabar where he presented gift items like books and monitor, said it baffles him whenever people say Nigeria was poor, despite her abundant human and material resources.

“I often stress it publicly with government officials that U.S. is not going to do anything for Nigeria; we are here to do things with Nigeria.

“When I look at the human and material resources in Nigeria, I see it as a tremendously rich country and not a poor country.” Earlier, the company’s CEO, Dr. Lazarus Angbazo, thanked the US Ambassador for the support towards the growth of General Electric investment in Nigeria.

He was optimistic that completion of the company’s site would create jobs for the teeming unemployed youths and also become a power hub in Nigeria in particular and Africa in general.

In this article:James Entwistle, Nigeria, US