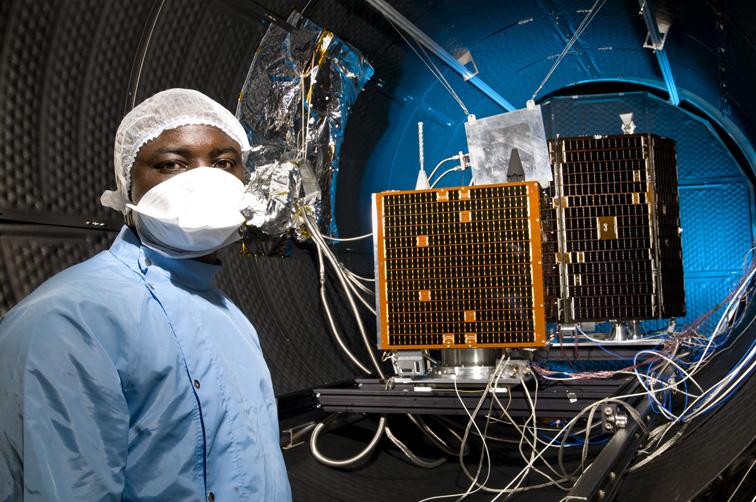 Bosun Yusuf, Thermal Subsystem Enginer, Surrey Satellite Technology Limited, (SSTL), and Know How Technology Transfer, KHTT, infront of SSTL designed spacecraft ‘Nigeria Sat-2’ and ‘NX’ as they are readied for testing in the Space Test Chamber at STFC's Rutherford Appleton Laboratory, RAL, Space Science & Technology Department, SSTD, on 10th July 2009. Both satellites are for the National Space Research and Development Agency (the government of Federal Republic of Nigeria) and are due to be launched early next year as part of the Disaster Monitoring Constellation (DMC), set up for the Algerian, Nigerian, Turkish, British and Chinese governments to provide emergency images in the event of a disaster.

All right thinking and patriotic Nigerians that have weighed in on the current economic realities have consensus on one issue: that this is the best opportunity we have of breaking free of the vicious circle of a consumption heavy and import dominated economy. The truth however is that while we can easily break away from the ridiculous importation of agro-based product, finished and innovative products pose their own challenge. We must first develop the capacity to produce them.

This, fortunately, is the point where the National Agency for Science and Engineering Infrastructure (NASENI) comes into play. The Executive Vice Chairman of NASENI, Professor Mohammed Haruna has done a good job at the agency and there is no better time than now to harness his wealth of experience for getting the nation out of the woods.

It is on record that Professor Haruna has been recognized severally for the impact he has made at NASENI.  For instance, this is a man who has received the Fellowship Award of the Non-Academic Staff Union of Educational and Associated Institutions (NASU) at its just concluded National Delegates Conference in Abuja in recognition of the his superintending over unprecedented technology products development feats and general transformation of NASENI since his assumption of office in 2012.

The national body of NASU summed it up nicely when it said it recognized the giant strides recorded by NASENI under the leadership of Professor Haruna towards actualizing the dream of the Federal Government in the attainment of technology advancement of the country.

Such is the level of confidence he has in the quality of products churned out by NASENI that the Executive Vice Chairman had in the past repeatedly urged the Federal Government and its other agencies to adopt and patronise them. Only a man that has given his best can summon that level of confidence. As far back as the third quarter of last year, he had predicted that the agency alone has the capacity to help the nation become strong economically.

A cursory review of what Professor Haruna has done in NASENI reveals lessons that are immediately applicable on a national scale and can be adopted by other government agencies. He has this remarkable strategy of planning and we are talking the kind of planning that integrates the private sector from scratch. This has in its own way been useful to boosting adoption rate of the products from the organisation since those in a a position to scale them up for commercialization are carried along from inception. The agency has been amply opened up to strike partnership deals with the private sector, which will explain why

The other good thing he has done at NASENI was to give free hand to staff of NASENI to explore their creativity contrary to the norm where those connected to government establishment are stifled. The creative juices this flow freely yielding innovative products that are going places.

The Presidency should therefore give a marching order to Professor Haruna to provide a compendium of the products developed at NASENI. These should then be reviewed within the shortest possible time by a team drawn from the public and private sectors with a view to identifying the ones that can be scaled up to address Nigeria’s industrialization needs. Another facet to the task that the Presidency must set for the NASENI Executive Vice President is that his agency must speed up its activity because of the desperate situation the country has found itself with the plunging crude oil prices.

For other agencies, it will be worth the while of their leadership to take cues from the NASENI Chief executive with a view to replicating things that have worked for him in their own organizations. Where possible, they should create avenues for him to come around and inspire the staff of their organizations.

Nigerians believe that President Muhammadu Buhari must assemble persons in the mould of Professor Haruna and add them to his change agenda to re-write the story of our nation as oil revenue dependent nation.

On his part, it is important to urge that Professor Haruna does not relent on the exceptional standard he brought on board when he resumed at the agencies. Several organizations might have honored and recognized him with awards but the greatest honour would be making it possible for NASENI to help Nigeria overcome the current challenges. He should for the sake of us all put the agency to good use for the good of the country.

Ahead of the 2023 elections, the Independent National Electoral Commission is planning to set up voting centres for over two million Internally Displaced Persons...