More facts have emerged on why the five aggrieved governors on the platform of the Peoples Democratic Party have yet to agree on the presidential candidate they will support having fallen out with the candidate of their party, Atiku Abubakar.

The Punch learnt that the governors, Nyesom Wike of Rivers State, who is the leader of the team; Samuel Ortom of Benue State, Ifeanyi Ugwuanyi of Enugu State, Okezie Ikpeazu of Abia State and Seyi Makinde of Oyo State, could not agree on a particular candidate during their visit to the United Kingdom during the week.

There have been indications that the G-5 and its expanded Integrity Group, comprising some former governors and party bigwigs, might support one of Atiku; the presidential candidate of the All Progressives Congress, Asiwaju Bola Tinubu, and that of the Labour Party, Mr Peter Obi.

However, with about 55 days to the presidential election, which is scheduled for February 25, many Nigerians have anticipated that the London meeting by the G-5 governors would eventually produce their preferred candidate. But indications emerged that they were unable to take a unanimous position on who to support in the election.

Sources close to the meeting disclosed that due to their respective ambitions and interests, the aggrieved governors had yet to agree on who to support.

While Makinde is seeking re-election as governor on the PDP platform, Ortom, Ugwuanyi and Ikpeazu, who will finish their second term on May 29, 2023, are all contesting senatorial seats in their respective districts. Even though Wike, the most outspoken among them, is not contesting any position in the forthcoming elections, the PDP governorship candidate is his preferred choice and the governor has been campaigning for him.

Sources close to the group said after their reported meeting with Tinubu in London, the governors decided not to openly campaign for the presidential candidate of the party or any other candidate so as not to jeopardise their chances in the election.

One of the sources, who spoke on condition of anonymity because he was not authorised to speak on the issue, said the governors were sharply divided over the candidates.

The source said, “Many people know that former President Olusegun Obasanjo sold the candidacy of Peter Obi to them. He wants the governors to back the former Anambra State governor. Some initially embraced the former President’s suggestion out of respect for him.

“However, it was clear that Obi might not win the election, so the reality of this dawned on the governors and they discussed it, but they did not take a position.

“You also know that the presidential candidate of the APC sent emissaries to the governors before he personally met them. He had negotiated with them, especially Wike. But the other governors are afraid that such a negotiation could work against them in their states.

“The APC and its presidential candidate are not very popular in the South-East. In fact, the people of the zone are angry with some comments said to have been made by the vice-presidential candidate of the APC (Kashim Shettima) sometime ago. This was why the people walked out on him in Imo State when members of the party went there for consultation.”

It was learnt that knowing the zone was mainly controlled by the PDP, governors from the region might find it difficult to campaign for the APC without working against themselves.

Another source told one of our correspondents, “The South-East generally is for the PDP, though the Labour Party through Obi is making inroads into the place. Given the fear of the people and their personal ambitions, they are likely going to back Atiku and the PDP.

The source added that the positions of Ortom and Makinde were almost similar.

The source explained, “For example, in Benue, the governor has never hidden his anger against the APC. Remember the party refused to give him a second term ticket, but the PDP accommodated him. He had fought with almost all the power brokers in the opposition.

“His preferred candidate is also not popular unlike the APC candidate. If he confuses the voters, he and his candidate will lose in the election.

“Makinde has many enemies within the PDP. The likes of Bisi Olopoeyan and Mulikat Akande-Adeola and their supporters are still angry with the way the governor treated them during the last primaries and others. Yet, his enemies are increasing.

“Don’t forget, the APC governorship candidate in Oyo State, Senator Teslim Folarin, and that of the Accord Party, Bayo Adelabu, are waiting for Makinde to make a mistake so that they can take advantage of it. They are even talking about forming a coalition against Makinde, so it’s clear that the governors have to survive first.”

However, it was gathered that one of the governors from the South-East (name withheld) visited Atiku a few days ago and assured him of his loyalty.

A source privy to the visit said, “The governor went to Abuja. He told the former VP that he would work for him and the PDP, saying he was following Wike because of their friendship and what he had benefited from him. He also said he would never work for any other candidate or political party apart from the PDP and Atiku.”

Meanwhile, Wike has denied reports that the G-5 governors have endorsed any presidential candidate. He spoke at the Eneka Road roundabout during the inauguration of the Eneka-Igbo Etche Road project, shortly after arriving from the UK on Friday.

He also denied having any interview with the BBC as alleged by some reports, noting that the PDP presidential campaign council claimed to have moved on but was always querying the moves made by the group.

He stated, “I travelled overseas on the 26th (of December) having worked so hard. Some people say we have moved on, yet you tell Nigerians you are not bothered by the G-5. They said I had a conversation with the BBC, where is the picture or the video?

“The truth is you don’t need to speculate; when I want to do something, I do it. There is no trouble, what we have is an introduction to trouble.

“Leave me alone, leave Seyi Makinde alone, leave Ikpeazu alone, leave Ifeanyi alone. My dear people, I just want to tell you that whatever decision I will take I will let you know, and I cannot take any decision without taking any advice from you.

“I am not the one who will go and see somebody and I will hide, hide from who? Who is that person that will threaten me? You say you will sack me, go ahead. I am not worried; you that is sacking you are worried; me that will be sacked am I worried? Try it and see how you will survive it.”

He said he stood by his word when he said he would remain a party man and support whoever emerged from the presidential primary, but that Atiku should also fulfil his promise that he would make sure the same zone did not produce the candidate and the national chairman of the party. 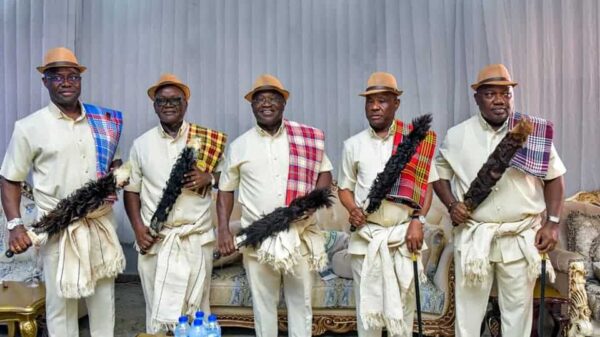