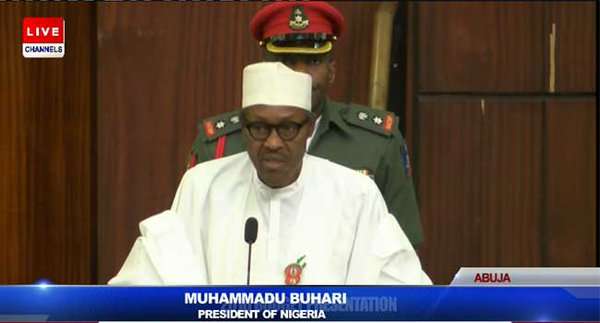 The Peoples Democratic Party (PDP) describes the N6.8 trillion 2016 federal budget presented by President Muhammadu Buhari on Tuesday as a big fraud and executive conspiracy tailored towards mortgaging the future of the nation.

The party queried President Buhari’s decision to borrow N2 trillion, the biggest in the history of the nation as the height of recklessness and deceit from a government that trends on propaganda.

The PDP in a statement by its National Publicity Secretary, Chief Olisa Metuh on Tuesday berated the Federal Government for trying to use their bogus welfare programme and phantom capital projects as cover and conduit to syphon the funds to satisfy partisan interests, particularly to settle huge campaign debts.

“It is obvious that this budget is an extension of the campaign promises of the APC government, presented as a manifesto filled with bogus promises which implementation will be inconclusive, thereby allowing the APC to once again deny their promises.

“There has never been any known economy in the world where government deliberately mortgage the future of its nation by borrowing excessively to finance partisan interests while hiding under bogus welfare programmes. This is moreso important as the APC in reeling out their bogus campaign promises never informed Nigerians that they would mortgage their future through excessive borrowing.

The PDP said the budget clearly shows that after seven months in power, President Buhari and his party, the All Progressives Congress (APC) are yet to differentiate between governance and campaign propaganda.

“By all standards, the 2016 budget, the first major economic policy outing of this government, is completely unrealistic and duplicitously embellished with impractical predications, a development that confirms fears by economy watchers and investors that this administration is obviously ill-equipped for governance.

“We are indeed shocked that President Buhari and his minister of information have come up with two different reasons for the current fuel crisis in the country. While we appreciate the President’s apology, we think it is high time he called this minister to order as his excessive propaganda and blame game are ridiculing this administration and the image of the nation.

“Furthermore, it is instructive to note the official endorsement of Mr. President to the devaluation of the naira as against his campaign promise of firming up the value of our currency even to the much vaunted one naira to one dollar.

‘Does it mean that Mr. President lied his way to power, or that he did not understand the complexities of governance when he was making his false promises to Nigerians?

“In future, there is need to regulate campaign promises so that we will not end up with a government that promises to climb Mount Everest with bare hands and end up mortgaging our future with orchestrated borrowings.

“Finally, we want to request Mr. President to once again to involve experienced and well-tested hands in the management of the economy and budgeting processes. This economy is not for Mr. President, neither is it for the APC. The progress of the economy is for all Nigerians and as such, due care should taken to save ourselves from unrealistic and deceptive programmes.