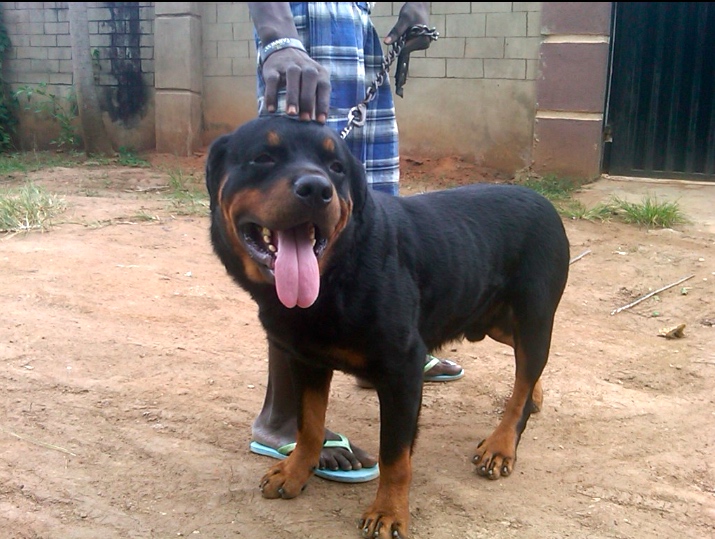 A 30-year-old trader has been arrested by the police in Ogun state for naming his pet dog ‘Buhari.’

The trader, Joe Fortemose Chinakwe, of No 10, Omikunle Street, Sango-Ota, Ogun State, was reportedly arrested last weekend, after one of his neighbours of Northern extraction complained bitterly that he named his dog after his father, Alhaji Buhari.

Vanguard reports that the complainant reported the case at Sango Police Station, last Saturday, after which the trader was arrested and detained. However, it was gathered that efforts by the police to recover the dog, which they intended using as evidence failed following a clever move by the suspect.

The trader, said to be trading in female wears at a popular market in Sango, allegedly directed his friends secretly to kill the dog and possibly eat the meat in order to avoid being implicated. It was gathered that consistent appeals by his friends and relations for the police to grant him bail failed as the complainant and his kinsmen reportedly threatened to kill the trader if he was released on bail.

The case, however, took a different dimension two days later when Chinakwe’s relatives went to Sango police station to further plead for his bail only to be informed that the case file and the suspect have been transferred to Ogun State Police Command headquarters at Eleweran.

A relation to the suspect, who simply identified himself as Chiedozie, disclosed that his brother was being persecuted for no just cause and expressed fears that he may either be poisoned inside police cell or thrown into jail. Chiedozie said: “Chinakwe is a lover of dogs and he names them after things that tickle him. He bought this dog a year ago and named it Buhari.

Unfortunately, some Northerners, who dominate the vicinity where he resides misconstrued his intention and connived to take him up. The complainant then claimed it was derogatory because his father answers Buhari.” Police sources, however, told journalists that the actions of the suspect “were very provocative.”

“He not only named the dog Buhari but boldly wrote it on the body of both sides of the dog and was seen parading the neighbourhood dominated by Northerners with it”, Vanguard quoted a police source.

As at press time, relations to the suspect were still making frantic efforts to effect his bail while his accusers are insisting that he must be prosecuted.

When contacted around 8pm yesterday, the acting Police spokesman in Ogun State, Abimbola Oyeyemi, ASP, said he was still trying to get the Divisional Police Officer in-charge of Sango for details. Oyeyemi later called, stating that: “I have made enquiries. The man bought a dog and inscribed Buhari on both sides of its body. One Mallam lodged a complaint and when our men got there, we found out that it was true. You know such thing can cause serious breach of the peace and ethnic or religious unrest. We are charging him to court for conduct likely to cause a breach of peace.”

Continuing, he said: “He was arrested last Saturday and we are taking him to court later today (Tuesday) or tomorrow morning (today). You know an average Northerner will feel bad over such a thing. It can cause serious ethnic crisis or religious confrontation because when you are relegating such a name to a certain person, you are indirectly insulting him.”

When asked about the whereabouts of the dog that will be used as evidence against the suspect, the police spokesman said: “The dog cannot follow anybody except the owner. We will use him as our evidence because he did not deny it.”