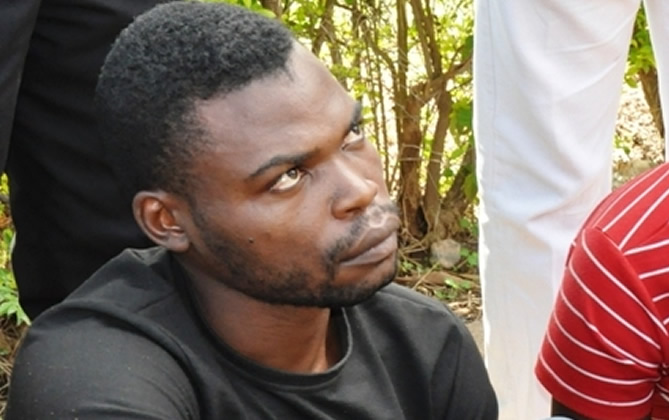 The police in Kaduna State have paraded the suspected killer of a female Naval officer at the Armed Forces Command and Staff College, Jaji, Air Commodore, Oluwayemisi Ogundana.

Until her death, Ogundana was the commandant of Command Secondary School of the Armed Forces Command and Staff College.

The state Commissioner of Police, Ali Janga paraded the prime suspect, Simon Bernard along with 44 other suspects on Wednesday.

The suspect who confessed to the crime said he single handedly killed the Naval officer after gaining access into her house located at the Jaji Military Cantonment in September.

He also admitted to using an iron rod to hit her head from behind, after sneaking into her house.

According to him, he killed her because she was allegedly fond of cheating the staff under her.

The suspect went further to explain how he dismembered her body and later packed it into two bags, dropped them in the officer’s SUV jeep and drove off to where he dumped the two bags into a shallow well.

Among the others who were arrested and paraded were suspected abductors of three students of the Ahmadu Bello University, Zaria and a member of the state House of Assembly, Suleiman Dabo.

The CP told reporters that the suspects were arrested at different locations during several operations carried out by men of the command and the IGP Rapid Response Team.

He further explained that the some of the suspects confessed to being responsible for the killing of three Operatives of the IGP Intelligent Response Team (IRT) in 2018 and recent Kidnapping of an Islamic cleric, Sheik Ahmad Algarkawi among other crimes.