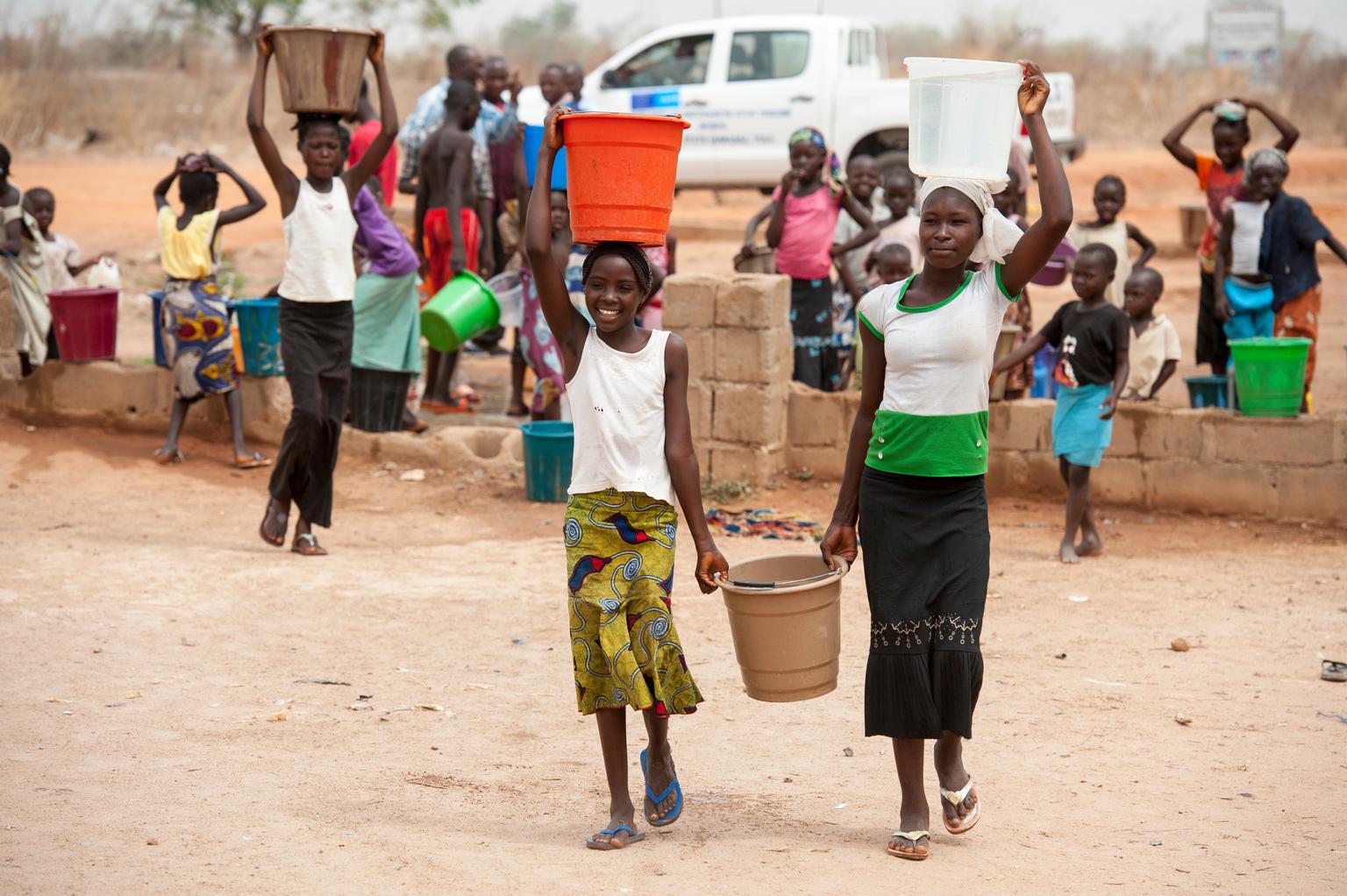 On 27 March, girls carry buckets filled with water, in the Kwanaya camp for internally displaced people, outside Yola, the capital of Adamawa, a state in the countrys north-east. Other children, women and men are gathered nearby. UNICEF supports the operation of a small clinic and helps maintain a supply of fresh drinking water in the camp. In March 2015 in Nigeria, 15.5 million people, including 7.3 million children, are affected by the continuing crisis in the countrys north-eastern region. More than 1.2 million Nigerians have fled their homes as a result of violence and attacks by Boko Haram insurgents that have escalated since the beginning of 2015. Many of the displaced, most of whom are children and women, are sheltering with in host communities that have limited resources, and in formal and informal camps. All are in urgent need basic supplies, health and nutrition services, and critical water sanitation and hygiene support to prevent the spread of disease. Over 150,000 people  the vast majority children and women  have also fled to neighbouring Cameroon, Chad and Niger, further straining vulnerable communities  some of which are already facing food insecurity and malnutrition, are prone to disease outbreaks and natural disasters, and often already host hundreds of thousands of refugees, returnees and migrants who have escaped violence and hardship throughout the region. The impact of the crisis on children and women is of particular concern. Many of them have lost their homes and belongings escaping with only the clothing they were wearing; and some have walked for days  or even weeks  to find refuge. Many children in the region have been traumatized and are in need of psychosocial support. They have witnessed violence and atrocities, including seeing parents and siblings slaughtered by Boko Haram insurgents; and have been exposed to or have experienced violence and brutality. Their homes have been burned and their schools have bee

Socio-Economic Rights and Accountability Project (SERAP) has requested Engr. Suleiman Adamu, Minister of Water Resources and Rural Development to “explain why Nigeria’s water and sanitation infrastructure has continued to deteriorate and millions of Nigerians have to resort to drinking water from contaminated sources with deadly health consequences, despite the authorities claiming to have spent trillions of naira of budgetary allocations on the sector since the return of democracy in 1999.”

The organization said, “Many toilets in public offices are out of order because of lack of water while millions of Nigerians remain desperate for water in their homes, often resorting to contaminated sources and drilling their own boreholes that can become easily mixed with sewage, with negative environmental impacts, and devastating for people’s health.”

The organization said, “Should Engr. Adamu fail to provide the information within 14 days, SERAP would take all appropriate legal actions to compel the government to act on this matter.”

In an open letter dated 2nd March 2018, and signed by SERAP deputy director Timothy Adewale, the organization expressed “serious concern that millions of Nigerians do not have access to clean and potable water and adequate sanitation. There is no water to show for the huge budgetary allocations and purported spending and investment in the sector since the return of democracy in 1999. Successive governments have failed to improve affordability of water for millions of low-income Nigerians, thereby denying them access to water.”

The letter read in part: “Contractors handling water projects are reportedly engaging in schemes like the deliberate use of substandard pipes, among others, to make profit, leading to loss of water. This dearth of water also affects sanitation. The large number of broken down water facilities across the country has hindered effective water supply to the citizens.”

“Millions of Nigerians (mostly children) lie sick, bodies ravaged by cholera, typhoid fever, dysentery among other diseases. An estimated 194,000 Nigerian children under the age of 5 die annually from these preventable diseases. There is almost no state and/or local government in Nigeria without abandoned water projects or one whose construction has gone on forever, creating a veritable opening for fraud and assuring the continued suffering of many.”

“The Federal Ministry of Water Resources is responsible for large water resources development projects and water allocation between states. The right to water is a human right, which places certain responsibilities upon the government including your Ministry to ensure that people can enjoy sufficient, safe, accessible and affordable water, without discrimination.”

“Nigeria has received donations running into several billions of dollars from the African Development Bank, the European Union, UNICEF, USAID, World Bank among others to implement water projects without any feasible improvement on access to water. The African Development Bank has invested over $905million in the sector since 1971. Nigeria is currently investing over N85billion in the water sector, yet millions of Nigerians do not have access to portable water, and have resorted to drilling of boreholes, with negative environmental impacts.”

“SERAP is seriously concerned that alleged stealing or mismanagement of these large sums may be responsible for the lack of access of millions of Nigerians to clean and portable water, with its attendant consequences. Due to inadequate maintenance of water facilities, Nigerians have contacted various water-borne diseases like typhoid fever, cholera, diarrhoea, hookworm, infection and Hepatitis A; some others have died because of these diseases.”

“The disclosure of the information requested will provide SERAP and the public with clarity on how funds allocated to the Ministry have been spent on specific projects, with details of locations of water and sanitation projects across the country; the possible challenges the Ministry might be facing and engender robust conversations on possible solutions to better the conditions of Nigerians and improve access to clean and portable water, especially for those living in extreme poverty.”

“Considering the impacts of water on other sectors of the economy and its impact on the realisation of other human rights, the judicious spending of the money approved to the water sector will go a long way to preserve the nations underground and surface water sources and prevent the environmental disaster that may result from concurrent drilling of boreholes by several Nigerians, due to lack of access to clean and portable water.”

“SERAP believes that as a matter of public interest, the citizenry is entitled to know how its wealth is being used, managed and administered in a democratic setting, as this affects the commonwealth of the society. SERAP firmly believes that the request falls within the Nigerian citizens’ right to know as guaranteed under the Nigerian Constitution of 1999 (as amended), the African Charter on Human and Peoples’ Rights to which Nigeria is a state party, and the Freedom of Information Act, 2011.”

“Also, by virtue of Section 4 (a) of the FOI Act when a person makes a request for information from a public official, institution or agency, the public official, institution or urgency to whom the application is directed is under a binding legal obligation to provide the applicant with the information requested for, except as otherwise provided by the Act, within 7 days after the application is received.” 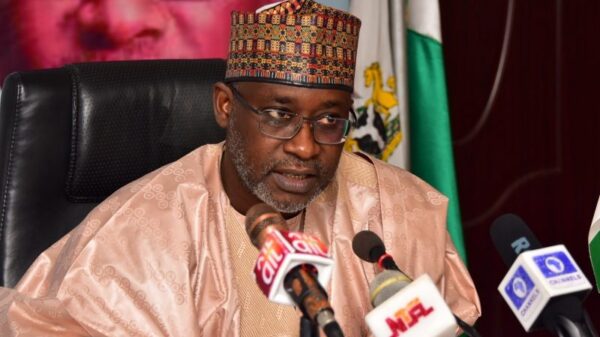 Flooding: Declaring ‘State of Emergency’ Not Yet Necessary – Minister

The Minister of Water Resources, Suleiman Adamu, on Thursday said declaring a state of emergency over the disastrous flooding across the country was not...