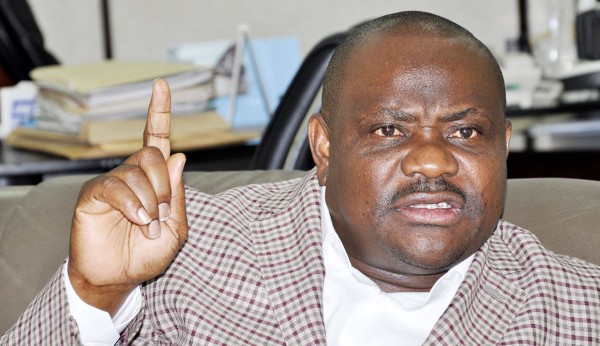 Rivers State Governor, Nyesom Wike, has called on well-meaning Nigerians to prevail on the Minister of Information, Lai Mohammed, to stop stoking the embers of disharmony and divisions in the polity with his irresponsible utterances and wild allegations against members of opposition political parties.

He described as wild allegation, the claim by the federal government that members of opposition in the country are those sponsoring the now-proscribed Indigenous People of Biafra (IPOB).

This is as the Chairman of Newspapers Proprietors Association of Nigeria (NPAN), Nduka Obaigbena, urged the Nigerian mainstream media to support and champion the call for devolution of power.

Both Wike and Obaigbena spoke yesterday in Port Harcourt, the Rivers State capital, at the opening ceremony of the 13th All Nigeria Editors’ Conference (ANEC) of the Nigerian Guild of Editors (NGE).

While declaring the conference open, Wike lamented that the minister of information was wrongly accusing opposition figures of sponsoring IPOB, saying it was not only divisive but capable of throwing the country into chaos.

He also said it would be dangerous for the peaceful coexistence of Nigeria if the clamour for political restructuring, fiscal federalism, state police, guarantee for free and fair election are ignored.

The governor said: “Nigerians of goodwill must therefore urge leadership of the country to stop fanning the embers of disharmony and division in the polity with its irresponsible utterances and wild allegations against members of the opposition political party-that opposition is the one sponsoring IPOB.

“Then you see, who are those being affected by the activities of IPOB? Are they not those in the opposition states? In the hey days of Boko Haram, does that mean it was the opposition then that was sponsoring Boko Haram just to distract the government then?

“Today, the clamour for political restructuring, fiscal federalism, state police, guarantee for free and fair election have never been this determined across the country and will never go away. It is becoming clearer by the day that to ignore these calls is potentially dangerous to the unity and peaceful coexistence of this country.”

He stated that Nigeria is in crisis as a result of poor governance, nepotism and marginalisation, saying the country needs forthright leadership and consensus building to steer the ship of state from the wrong direction it is heading to safer ground.

Wike said: “Acts of impunity, political intimidation, election rigging and abuse of power are wrongs not only against Rivers State, but against the entire country. We are only pretending when we feel that all is well with the country.

“The country is in crisis because of poor governance, nepotism, marginalisation and state-sponsored repression continues to bring violence to national unity and cohesion. At times like this, the country needs forthright leadership and consensus building to steer the ship of state from the wrong direction it is heading to safer grounds.”

He cautioned: “We are only pretending that all is well with our country. The country is in crisis as poor governance, nepotism, marginalisation and state-sponsored repression continue to do violence to national unity and cohesion.

“At times like these the country needs forthright leadership and consensus building to steer the ship of state from the wrong direction it is headed to safer grounds.”

The governor called for concerted efforts to put the country back on the path of good governance.

He said: “For some of us, therefore, there is nothing nobler than being counted on this path, and as long as God gives us breath, we shall remain in the trenches fighting for our democratic rights and freedoms until victory is ultimately achieved.

“But, we also believe that this is a fight that should and must be led by the media for full effect and agenda setting. This calls for greater vigilance and courage in giving effective voice to the contending issues and taking personal responsibility for factuality. It can’t be otherwise.”

Wike regretted that despite the monumental achievements of his administration, the opposition in the state has continued to undermine development, with tacit support from the federal government and a politically inclined police.

“Therefore, when a supposed opposition goes beyond the bounds of decency in conjuring lies to rubbish and undermine every effort of ours to serve and advance the progress of the state, then the media owe society the duty to investigate and expose their mischievous intentions with the facts at their disposal.

“At any rate, those who live in glass houses, they say, should avoid throwing stones. As our representatives in the federal government, are they not responsible for attracting development projects to Rivers State?” he queried.

In this article:Guild of Editors, IPOB, Lai Mohammed, Nyesom Wike