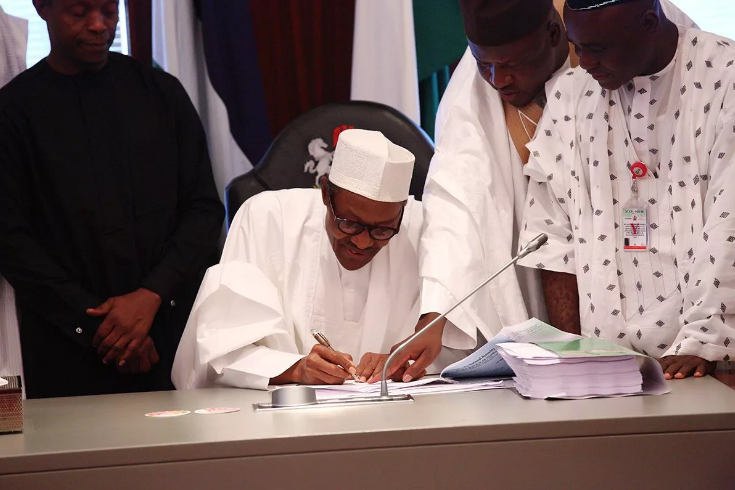 President Muhammadu Buhari yesterday signed the controversial Appropriation Bill into law, saying it was coming in the middle of Nigeria’s toughest economic period since independence in 1960, The Nation reports.

But he was optimistic that its coming into effect will mark the beginning of the change in the structure of the Nigerian economy once and for all.

A sum of N350 billion is being injected into the economy immediately to reflate it.

For the umpteenth time, President Buhari apologised for the inconveniences caused by the economy, saying that living in the State House does not in any way alienate him from the daily struggles of Nigerians.

“I read the newspapers and listen to the TV and radio. I hear your cries. I share your pains,” he said.

Noting that Nigeria is experiencing probably the toughest economic times in its history, he acknowledged  the sacrifice, resilience and toughness of all Nigerians who continued to have hope and confidence of a great future despite the hardships.

He branded his administration as one like no other..

“Permit me to say that this government is also like none other. We are absolutely committed to changing the structure of the Nigerian economy once and for all.

“We are working night and day to diversify the economy such that we never again have to rely on one commodity to survive as a country. So that we can produce the food we eat, make our own textiles, produce most of the things we use.

“We intend to create the environment for our young people to be able to innovate and create jobs through technology.

“I cannot promise you that this will be an easy journey, but in the interest of so much and so many, we must tread this difficult path. But I can assure you this government you have freely elected will work with honesty and dedication day and night to ensure that our country prospers and that the prosperity benefits all Nigerians.”

The N6.06 trillion budget, according to him, “is intended to signpost a renewal of our commitment to restoring the budget as a serious article of faith with the Nigerian people.”

He spoke of government’s determination to table appropriation bill before the National Assembly not later than October henceforth in time for the passage of the Act before the beginning of the fiscal year.

Throwing more light on the objective of the budget, he said:”Through the 2016 budget, titled Budget of Change, the government seeks to fulfill its own side of the social contract.

“In designing the 2016 budget, we made a deliberate choice to pursue an expansionary fiscal policy despite the huge decline in government revenues from crude oil exports.

“This is why we decided to enlarge the budget deficit at this time, to be financed principally through foreign and domestic borrowings. All borrowings will however be applied towards growth-enhancing capital expenditures.

“To illustrate our renewed commitment to infrastructural development, the 2016 budget allocates over N200 billion to road construction as against a paltry N18 billion allocated for same purpose in the 2015 budget.”

Despite the current challenges, he said that his administration will work extra-hard to achieve the revenue projections.

“Our revenue generating agencies are coming under better management and are re-oriented. The implementation of the Treasury Single Account (TSA) is expected to contribute significantly to improving transparency over government revenues,” he said.

The President said that further details of the approved budget and Strategic Implementation Plan for the 2016 budget will be provided to the public by the Minister of Budget and National Planning, Udoma Udo Udoma.

He said that he would also speak more on the Budget, its implementation and the overall national economic and social policies of his government on May 29 when he will be marking his first year in office.

He hailed the National Assembly for making the budget a reality.