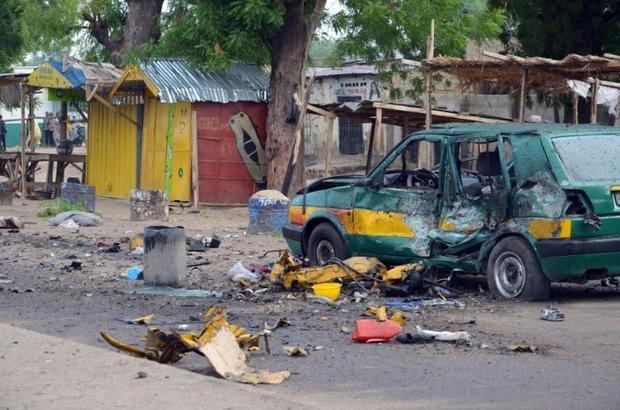 Fourteen people have now died in the latest suicide bomb attack in northeast Nigeria, an official said Monday, calling for greater protection for those made homeless by Boko Haram.

Three bombers, all of them women, detonated their explosives near the sprawling Muna Garage camp on the outskirts of the Borno state capital, Maiduguri, on Sunday evening.

The blasts came after warnings of a build-up of jihadist fighters outside the strategic city, which has been the epicentre in the eight years of Islamist violence.

“So far, we have 14 people killed and 18 injured in the triple suicide bombings last night,” he said.

But he said the Muna Garage site, which in the last 18 months has developed from an informal settlement into a vast camp for internally displaced persons (IDPs), was “vulnerable”.

“So far this year we have recorded 13 suicide attacks in the area, including that of yesterday. I think we need to revise the security situation in the area,” he added.

“We need to employ modern surveillance strategies which will enable us to identify potential attackers before they strike”.

There are currently about 1.7 million IDPs in Borno and the neighbouring states of Adamawa and Yobe staying in camps or with distant relatives or friends, according to UN figures.

Unlike most of the formal IDP camps, Muna Garage is not enclosed within walls, with access strictly controlled by civilian militia forces or soldiers.

Instead, it lies on either side of the main road to Ngala, on the border with Cameroon, and near a bus station that attracts large crowds.

Access is possible from the road or the fields beyond the city limits.

Boko Haram, which has lost control of towns and villages that it occupied in 2014 and 2015, has increasingly used suicide bombers, particularly against civilian “soft” targets.

The last attack in and around Muna Garage was on September 8, when two women blew themselves up at a checkpoint.

The UN Office for the Coordination of Humanitarian Affairs last Friday said such attacks against IDPs in camps “continue to be a major concern”.

On September 20, nine IDPs from the Rann camp, in northern Borno near the shores of Lake Chad, were killed as they tended their fields.

On September 8, at least seven people were killed when Boko Haram fighters fired a rocket-propelled grenade into the IDP camp in Ngala, which houses some 80,000 people.

A week earlier, 11 people had died when militants stormed a camp in Banki, on the border with Cameroon, to steal food.