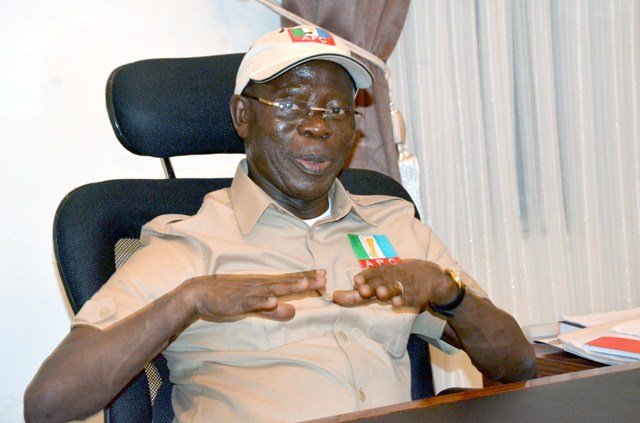 Ex-Governor of Edo State and former National Chairman of the All Progressives Congress (APC), Adams Oshiomhole, has dismissed the controversy over the choice of a Muslim running mate by the APC presidential candidate, Ahmed Bola Tinubu.

Oshiomhole said it is high time the country did away with primordial sentiments such as religion and ethnicity, and concentrate on competence and courage of candidates to save the country.

Speaking on TVC on Thursday, the former governor expressed satisfaction with the Muslim-Muslim ticket of the APC, while also commending Tinubu for making that decision.

“We need courage. We have struggled to balance this religious issues in recent years. Tinubu’s decision shows that he will take bold step when elected.

“If the number of churches and mosques we have built over the years is equal to number of factories, we won’t be at this poverty level in the country.”

Oshiomhole added that he was also satisfied with the choice of Shettima due to his capacity and some of his achievements.

He said, “We can’t continue with business as usual. I’m satisfied with the quality of Shettima. He is well-read and well-exposed. He is well awarded both home and abroad.

“We should spend time interrogating the personality, competence of Tinubu’s nominee. Soon, pagans will organise themselves to say otherwise too.”

He further described the Tinubu/Shettima ticket as a “balanced ticket” for the party, stating that Tinubu’s track record and Shettima’s impressive qualities would translate to defeat for the opposition party.

“It is a balanced ticket; balanced ticket in terms of competence, and their antecedents. The opposition party are threatened by this bold decision because they are sensing defeat.”

The former APC national chairman dismissed the concerns over “islamization agenda” with the Muslim-Muslim ticket, saying that Tinubu couldn’t even islamize his own family.

“What are the fears of people making this comment? They are saying there are plans to islamise Nigerians. The candidate himself (Tinubu), has he islamised his own family members? His wife is a Christian and a pastor.

“Our presidential candidate is a happily married man. He has demonstrated religious tolerance by the fact that his own wife is practising her own faith. How can a man who allowed freedom of worship in his home Islamise the country?”

Oshimohole also spoke on the lingering ASUU strike, stating that issues as such should have dominated the political commentary in the country.

He added, “Despite a Muslim president and a Christian vice president, it hasn’t translated to anything.

“And right now, I think what should feature most in our political commentary is: what is the problem between ASUU and the federal government? Even as a former Labour leader, I am not sure I know all the detail.

“I can imagine the pains parents are going through. So, we don’t discuss these issues and we are discussing religion.

“Okay, as we speak, we have a balanced ticket (Muslim-Christian), where has it translated to?”