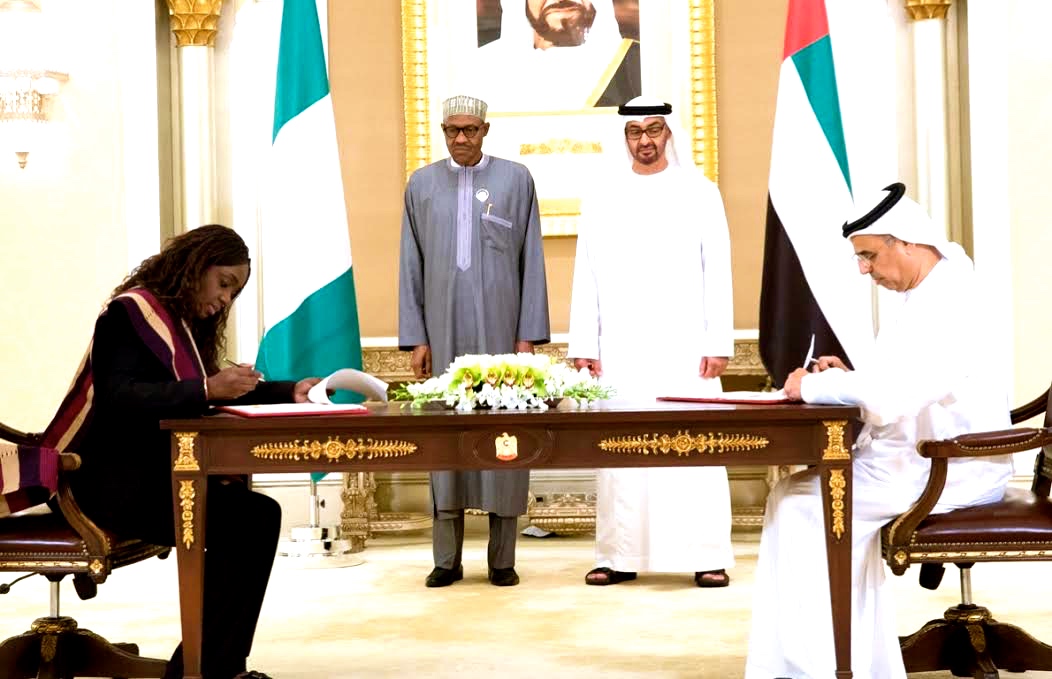 His Highness Sheikh Mohamed bin Zayed Al Nahyan, Crown Prince of Abu Dhabi and Deputy Supreme Commander of the UAE Armed Forces, and President Muhammadu Buhari of Nigeria, today held a meeting to discuss bilateral relations and attended the signing ceremony of a number of agreement between their two countries.

H.H. Sheikh Mohamed welcomed the Nigerian president who is in the UAE to attend the Abu Dhabi Sustainability Week and expressed satisfaction over the progressing relations between the two friendly countries.

During the meeting, the parties discussed ways of bolstering cooperation between the UAE and Nigeria in various spheres, with a focus on economic sectors, investment, trade and development, in order to serve the interests of the two countries and their people.

He stressed that the UAE, led by President His Highness Sheikh Khalifa bin Zayed Al Nahyan, supports all efforts aimed at promoting relations with Nigeria and takes great interest in building cooperation with friendly countries.

Welcoming Nigeria’s participation in the Abu Dhabi Sustainability Week and the 2016 World Future Energy Summit, the crown prince of Abu Dhabi underlined the importance of cooperation, exchange of expertise and launching clean and renewable energy projects in all countries to bring about positive impacts on wildlife and the needs of future generations.

The Nigerian president noted that he was delighted to visit the UAE and welcomed the expansion of Nigeria’s relations with the UAE.

He stressed Nigeria’s interest in capitalising on its good relations with the UAE to serve the peoples of the two friendly countries.

Later, H.H. Sheikh Mohamed bin Zayed and President Buhari attended the signing ceremony of a number of agreements between the UAE and Nigeria.

These include an agreement on avoidance of double taxation and prevention of fiscal evasion, signed by the UAE Minister of State for Financial Affairs, Obaid bin Humaid Al Tayer, and Nigerian Minister of Finance, Kemi Adeosun.