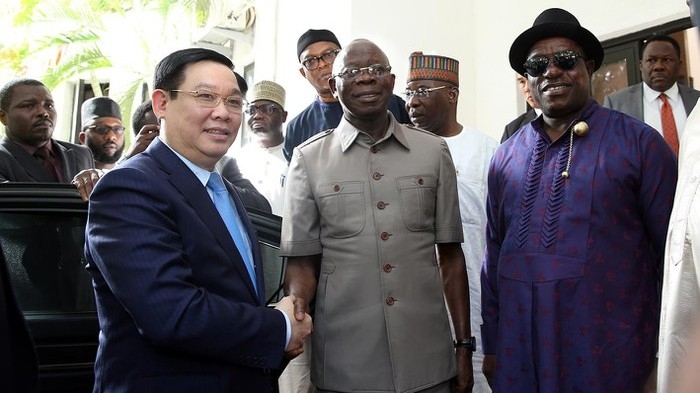 The All Progressives Congress on Tuesday rejected a  request by Vietnam to bring subsidised rice into Nigeria.

The APC  said  accepting the request   would  further  hurt the country’s economy.

Punch reports that the APC National Chairman, Adams Oshiomhole, stated this while receiving a delegation led by the Deputy Prime Minister of Vietnam, Vuong Hue, in Abuja.

Hue, who is billed to meet  with  Vice-President Yemi Osinbajo today had requested the support of the ruling party for the Asian nation to bring   subsidised rice into Nigeria .

But Oshiomhole said, “If government allows importation of food, our youths will become idle, that will lead to unemployment. We want to promote food security.

“Rather than importing rice from Vietnam, your (Vietnam) farmers can take advantage of  our arable land. We have to do that not only to protect farmers but to tackle food security.”

The ex-Edo State governor said the decision to close the borders by the Federal Government  deserved the support of every  Nigeria.

He said, “Nigerians should unanimously back the decision of the Federal Government to  close the borders until our neighbours decide to respect the laws of fair and free trade.

“Nigeria must not and cannot be a dumping ground for imported foods, imported rice and other smuggled chemicals and drugs.

“I think this is one policy that across party divides, across primordial sentiments, people should salute the courage of President Muhammadu Buhari in shutting  the borders because for too long, we have been a big brother to our neighbours. Now, that big brother is hurting us and hurting us very badly, we must secure ourselves as they say when you board  aircraft that if oxygen fails and they drop the mask, help yourself before helping others.

“This is the moment. We must keep those borders shut. If we do so for two or  three years, it doesn’t matter; so that our neighbours will learn to respect the rules of international engagement and the rules of trade.”

Oshiomhole added, “What has happened is that, people relocate from  Nigeria, target Nigerian market and use our neighbours to compromise our own trade policies. So, I think the media should understand what is at stake.

“We cannot continue to rely on imported rice. That was why I told the DPM, when he talked about allowing Vietnamese rice to come to Nigeria. I said No, we are not going to do that; we will not do that.

“On the contrary, we are prohibiting the importation of rice, we don’t need imported rice.”

The delegation had appealed to the FG  to suspend its policy to ban importation of rice.

Speaking through an interpreter, Hue said, “We can offer concessional import rate on rice while you are working on self-sufficiency. We can do two things at a time; while we give concession you can increase your local output.”