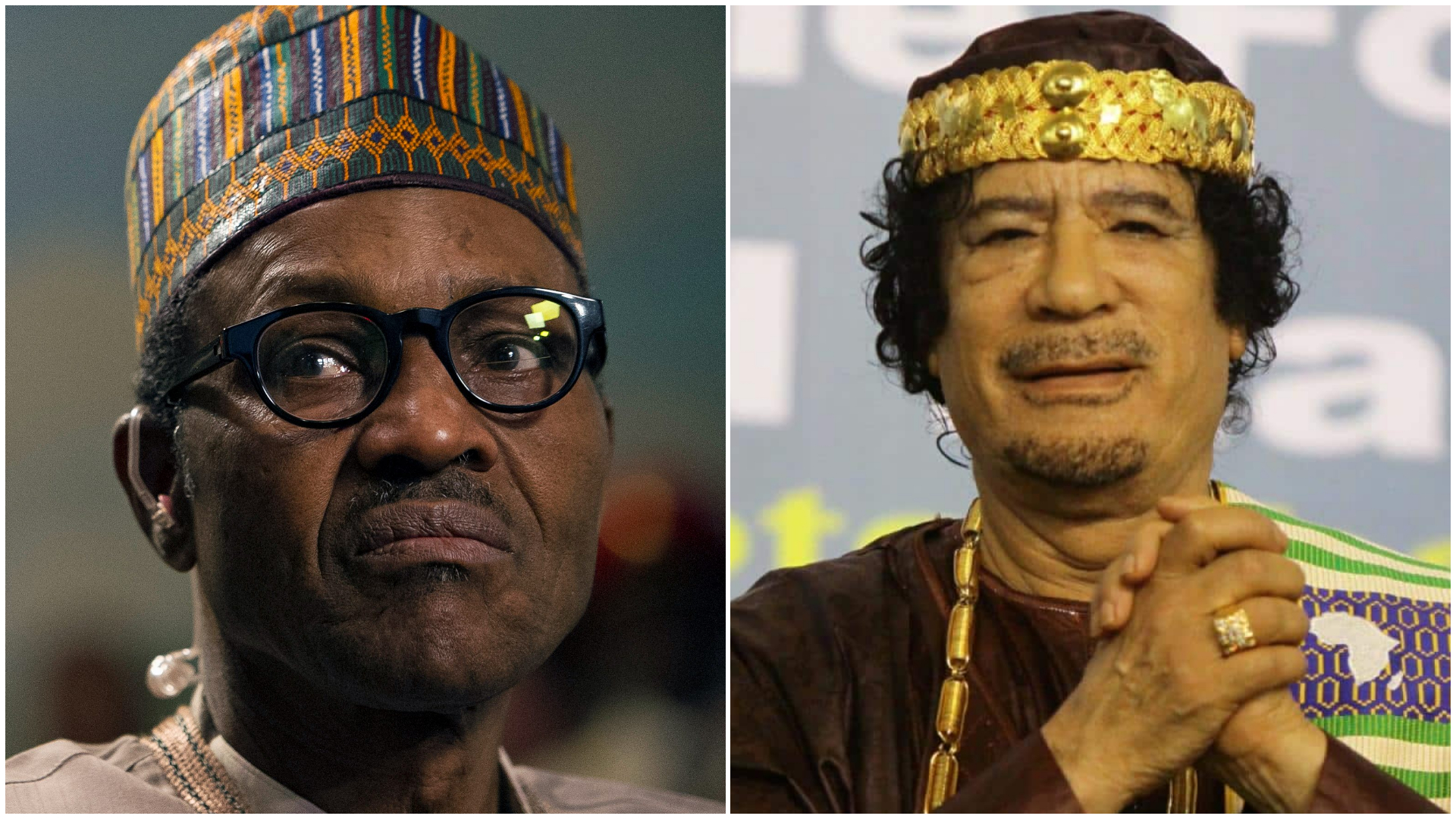 The President spoke at the Abuja House in London when Archbishop of Canterbury Justin Welby visited him.

The gunmen, he said, escaped into Nigeria and other West African countries after Gaddafi’s death.

He spoke, even as suspected herdsmen killed 13 people in Benue and Nasarawa states on Tuesday.

Responding to Welby’s comment on the herdsmen and farmers’ clashes in some parts of the country, Buhari said: ”The problem is even older than us. It has always been there, but now made worse by the influx of gunmen from the Sahel region into different parts of the West African sub-region.

“They were trained and armed by Muammar Gadaffi of Libya. When he was killed, the gunmen escaped with their arms. We encountered some of them fighting with Boko Haram.

“Herdsmen that we used to know carried only sticks and maybe a cutlass to clear the way, but these ones now carry sophisticated weapons. The problem is not religious, but sociological and economic. But we are working on solutions.”

The President said “irresponsible politics” had been brought into the farmers/herders’ crisis, promising that enduring solutions would be found, and justice done to all concerned.

In Benue State, 10 persons were killed on Tuesday night and many others injured in attacks by suspected Fulani herdsmen on Logo and Ukum local government areas.

The herdsmen, who attacked the two local government areas almost simultaneously, also razed houses and destroyed other properties worth millions of naira.

A resident of Gbeji, Mr. Abraham Ngyenev, said the attack started at about six pm and lasted for more than three hours.

Another eyewitness, Mathias Azawe, described the attack as devastating as it came when people were planting their crops.

Hemen said, “The attacks led to thousands of the villagers fleeing to safety, especially women and children.”

Confirming the incident, the Ukum LGA Chairman, Mr. Iberlogo Tortyokyaa, called on the Federal Government to protect the citizens.

The Benue State Commissioner of Police, Fatai Owoseni, said, “We can confirm that as of this morning (Wednesday) suspected herdsmen attacked the areas.

“Four dead bodies were recovered. We have stepped up security in the areas and we are investigating.”

The Benue State Governor, Samuel Ortom, described the attacks on Benue State as an extension of the terrorism perpetrated by Boko Haram.

Speaking on Wednesday in Makurdi, he said the manner the armed men invaded communities of the state and slaughter innocent people was not different from the mindless acts of Boko Haram in the North Eastern part of the country.

“They come with sophisticated weapons, kill people and chase them away.

In some cases, they do not have herds. They just come with their weapons, kill and chase the people out and take over the land and that is the worrisome part of it.

“The trend of attacks on Benue is beyond mere grazing of livestock.  If the invaders were only interested in grazing, the massive destruction of lives and property would not have been their priority,” he said.

Buhari also added that he declared his second-term bid on Monday before his London trip because many Nigerians were “talking too much” about whether he was going to run or not.

A statement by his Special Adviser on Media and Publicity, Femi Adesina, quoted him as saying: ”I declared before leaving home because Nigerians were talking too much about whether I would run or not.

“So, I felt I should break the ice. We have many things to focus on, like security, agriculture, economy, anti-corruption, and many others. We needed to concentrate on them, and politics should not be a distraction.

“The majority of Nigerians appreciate what we are doing, and that is why I am re-contesting.”

On Leah Sharibu, the Dapchi schoolgirl still being held by insurgents, reportedly because she refused to renounce her faith, the President said: ”We are managing the matter quietly. Making noise would not help. We are collecting as much intelligence as possible, working with the Red Cross and other international organisations.

“There are too many fraudulent people around, who claim they can do this and that. We won’t deal with them. That was how we got the Dapchi girls back, and the Chibok girls.”

The President also recounted some successes of his administration, especially in agriculture.

“We have cut the importation of rice by about 90%, saving billions of dollars in the process. People who rushed into petrol money have now gone back to agriculture. Even professionals have gone back to the land. Nigeria should be able to feed itself comfortably soon. I am so pleased,” he said.

On the war against insurgency, he stressed the need for continuous education of the people, “so that they can be free from religious manipulation,” adding that no true religion advocates the hurting or killing of the innocent.

Archbishop Welby said it was always a delight to see President Buhari, “whom I have tremendous respect for,” adding: “You have my best wishes on your recent decision. I read your declaration speech. We are neutral as a church, but we will pray for you. Great statesmen are those who run for the good of their country. We will be praying for you.”

The Archbishop presented President Buhari with a copy of his recent book: “Reimagining Britain. Foundations for Hope.