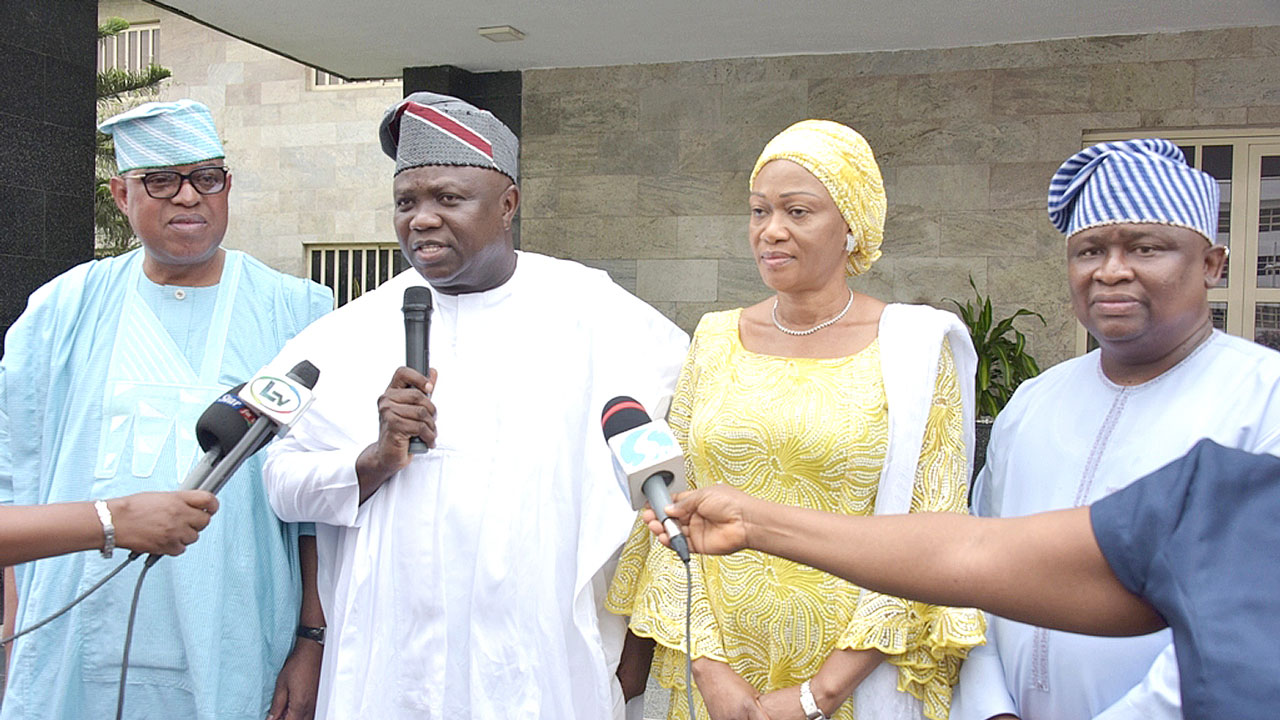 The Action Democratic Party (ADP) Lagos State Chapter has called on the three Senators representing Lagos State at the National Assembly not to allow themselves to be used as sabotage against the interest of Lagosians over their move to block AMCON Chairmanship slot for Lagos.

In a statement obtained from Lagos State Chairman of the party, Nasir Adewale Bolaji, while interacting with newsmen, leaders and members of the party at the party’s secretariat on Saturday, he said that for the overall interest of Lagosians, Senators must exercise restrain on how they are being pushed by some politicians to work against the nominee from Lagos.

I welcome all leaders and stakeholders of our great party, executive members, members and teaming supporters, pressmen and Lagosians to this occasion, an opportunity for our party to address the world on the state of affairs in Lagos State.

Our Party, Action Democratic Party (ADP) is anchored on people’s orientated programmes, that offer direct impacts on the lives of everybody resident in Lagos State rather than satisfying selected individuals or godfathers.

Today also affords our party, Action Democratic Party (ADP), the opportunity to further present ourselves as the ONLY CREDIBLE ALTERNATIVE with the capacity to bring real developments and to free Lagosians who are desirous of positive change and Progress.

Let me assure Lagosians that ADP is positioned to eradicate the scourging poverty, under development, inequality in wealth distribution, substandard education, security threats that is pervasive in the state and to make Lagos a truly mega city where opportunities will be available to all those pursuing their legitimate businesses to succeed in the state.

Our party ADP has become the main opposition political party in Lagos because of our steady resolve and determination to take power back from those who have held the state down for too long. May I also state our resolve to liberate the political space by providing opportunities for those who aspire to contest for one elective position or the other ahead of the 2019 elections, as against the tradition of impunity, and the imposition of stooges across the available spaces, that is the trademark of the failed ruling All Progressives Congress (APC).

Our party is open to discussion with stakeholders of like minds from other political parties to take back Lagos State. It is our resolve to put Lagos state back on the right pedestrial, Lagos State must claim its rightful place in the country as the center of excellence.

Recent developments in Lagos State has shown that Lagosians cannot continue with the mindless and undermining politics being played by leaders in the ruling APC, whose grip on the state has not actually allowed the full potentials of the state to be realized by all residents in the state.

The time to move away from those who are ready to destroy every opportunities that do not pass through their tables has come and our party, as people’s orientated party accept to lead the struggle for emancipation and continue to support every good idea(s) and opportunities that will add to the advancement of the state. We are not a party to stop the progress of the state for personal gains.

We are aware of a recent move by the three Senators representing Lagos State at the National Assembly of moves to block the confirmation of a nominee from the state for the Chairmanship of Asset Management Company (AMCON), an opportunity being threatened by the greed of those who would rather destroy everything just to score a cheap political point for personal gain.

In as much as we don’t want to interfere in the affairs of the ruling APC, it will be injustice to Lagosians to keep mum as a major stakeholder in the “Project Lagos” knowing that the blockage of the confirmation may be connected with the spat between a National Leader of APC and the former APC National Legal Adviser, Mr Muiz Banire (SAN).

As a party who is concerned with the progress of Lagos state, we find it disturbing that lawmakers elected to serve the interest of the state have descended so low as to abandoned their duties as legislators and decided to serve the interest of their godfather alone. It is the opinion of our party that personal political war between the two political leaders should not be allowed to affect the overall interests of all Lagosians.

We are calling on the three senators representing Lagos State at the Senate to forthwith withdraw their rejections to the confirmation of Dr Muiz Banire, SAN as the Chairman of Asset Management Corporation of Nigeria, AMCON, as further opposition would be construed as a direct assault on the state and its people.

May I warn that ADP would no longer tolerate sabotage of the interest of Lagos state and we will not hesitate to mobilise the people of the state against the Senators if they refuse to refrain from their anti-developments stance.

We take note that Lagos economy has been the most viable in Nigeria with an average IGR of N550b yearly, apart from the several billions from FAAC monthly allocations, grants and donors funds, however, it is frustrating that the level of development in the state is a far cry from what is being generated. Our party is calling on the Lagos State Governor, Mr Akinwunmi Ambode to adopt ‘Open Government’ initiative with immediate effect, as the government owes the citizens the responsibility to render account of their stewardship and how their resources are being managed, which we believe organizing town hall meetings and presentation of vague reports cannot sufficiently answer.

ADP equally asks the Lagos State government to publish the budget of the state with line items on major newspapers, electronics media and state owned website for the world to know, as well as the audited account of the state should be published to know what was actually generated, and what was spent.

In line with our promises to all Lagosians, we would practice a culture of transparency, respect for rule of law, human development via job creation, development of “Inner Lagos” across Local governments. ADP believes that developments should be encompassing and not specific to status as exemplified by APC, we will not only make judicious use of resources of the state but ensure its spread to all citizens, not minding their social status.

We are aware that it won’t be an easy task but we are ready to face leadership for all with the seriousness it deserves because we are ready, especially with piled up domestic and foreign (bilateral and multilateral) debts incurred by the APC government. According to Debt Management Office (DMO), Lagos is owing over N363 billion in domestic loan while foreign debt is also over $1.466 billion. In our opinion, Lagos as a state with highest revenue generation should not have such a huge debt if the humongous resources it generates are judiciously utilised. As we already know, massive corruption, award of phoney contracts, quest to satisfy godfather, leakages and culture of waste are responsible for the high debt profile in the State.

Finally, our Party Action Democratic Party (ADP) will not tow the retrogressive path of the ruling APC but will present brilliant minds with good character, capacity and competence needed to lead Lagos State at various elective positions, most especially for Governor, Senate, House of Representatives and State Assemblies.

Our party when given the opportunity to lead the state, will work with stakeholders in traffic and transport management to decongest traffic gridlock in Lagos state by opening new roads and expanding existing ones. Despite the abundance of water all over the state, it is disappointing that the APC government failed in providing households with drinkable water. ADP would not allow this to continue, we would commit the right resources to ensure that every household in Lagos state have access to portable and hygienic water. Aside meeting the peoples water need, it will serve a purpose of checking diseases that are contracted through water and keep Lagosians safe and healthy.

ADP plans to tackle housing challenges in the state as we will partner private sector to build houses for the safe abode of our people.

Our party will continue to engage stakeholders in the state and also move on with mobilization of members into the party. In no distant time, ADP will unveil it’s road map, economic blueprint and developmental agenda for Lagos State.

I therefore call on all leaders, stakeholders, and Lagosians in general to see ADP as the party of Progress, and the party sent by God to rescue them from the sinking boat of APC, as the party that will end the era of impunity and massive corruption in the state, I call on you to join us in this journey as the ONLY CREDIBLE ALTERNATIVE political party who can provide better service to all Lagosians, join and be a partner in Progress.