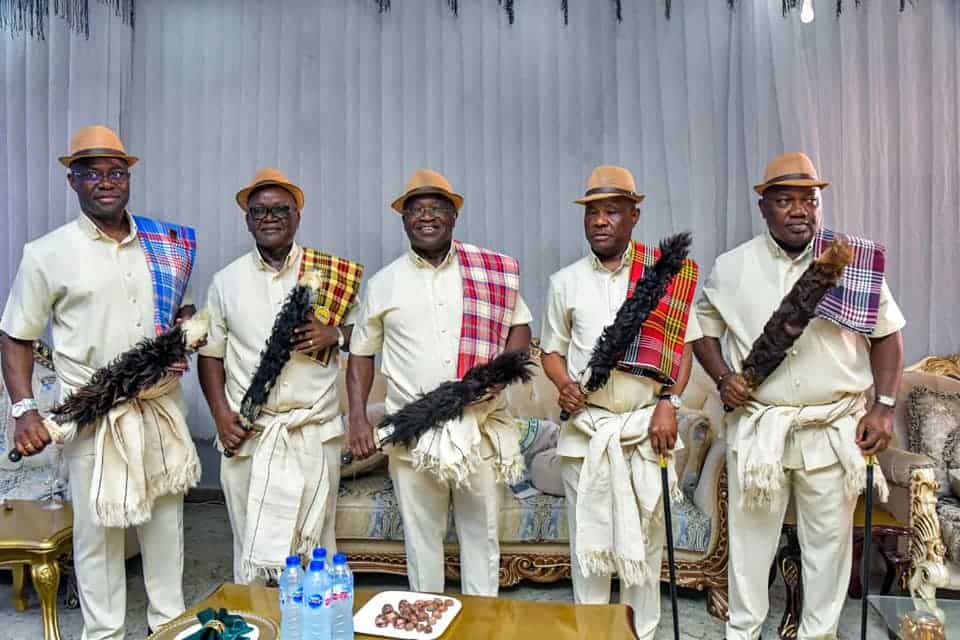 The two governors also said the G5 will soon announce its preferred choice of presidential candidate for the February 25 election in Nigeria.

Wike and Ortom spoke at the Mapo Hall in Ibadan, the Oyo State Capital, during the flag-off for campaigns for the reelection of Governor Seyi Makinde.

Makinde, Ortom, Wike are members of the PDP G5 alongside Okezie Ikpeazu of Abia and Ifeanyi Ugwuanyi of Enugu.

Decked in traditional attire synonymous with Yorubaland, Wike, Ortom, Ugwuanyi and Ikpeazu took turns to address the crowd of PDP supporters, persuading them to vote Makinde, whom they described as the “Youth Leader of the G5”, for second term in office.

“You all know that Seyi Makinde has done well since he came in 2019 and therefore the only way we can appreciate more and benefit more is for him to go back and complete the good work he has started,” Wike told the cheering crowd.

Wike urged the crowd to vote the PDP in the governorship election in the state, the various state House of Assembly, House of Representatives and Senate seats.

“The other one, Seyi will come to you,” he said of the G5 choice of a presidential candidate.

A U-Turn On Obi’s Endorsement?

However, Ortom on Thursday dismissed “social media gossip”, saying the G5 will let Nigerians know where it is headed at the appropriate time.

“We want to assure you that the Integrity Group and the G5 governors are committed members of the PDP in our various states.

“We have a challenge with the national leaders of our party because they have failed to deploy the internal resolution mechanism to solve the problems after the convention.

“We are committed to PDP in our various states and at the appropriate time, we are going to let you know where and what to do. We are united, we are together; don’t listen to gossip on social media – we are committed to PDP and all our candidates in our states,” the Benue State governor said.

The PDP Deputy National Chairman in the South-West, Taofeek Arapaja; the party’s Chairman in Oyo, Bayo Ogungbenro; amongst other party faithful were also in attendance.

However, the PDP presidential candidate, Atiku Abubakar; and the party’s National Chairman, Iyorchia Ayu; were conspicuously absent from the event on Thursday.

For months, the G5 has been at loggerheads with Atiku and Ayu over the chairmanship of the latter. The five dissatisfied governors want Ayu to step down for a southerner as a precondition to support Atiku’s decade-long ambition in the February 25 presidential election. But Ayu has insisted that he would only resign after his four-year constitutional term.

Wike and his allies were reported to have met the presidential candidate of the All Progressives Congress (APC), Bola Tinubu in London on Thursday on a possible deal but both the Rivers State governor and Tinubu have denied the meeting.

While Wike and his allies have not been seen to campaign for Atiku, it is not clear whether they will support Obi, Kwankwaso or Tinubu in the contest for Aso Rock’s top job. More facts have emerged on why the five aggrieved governors on the platform of the Peoples Democratic Party have yet to agree on the...