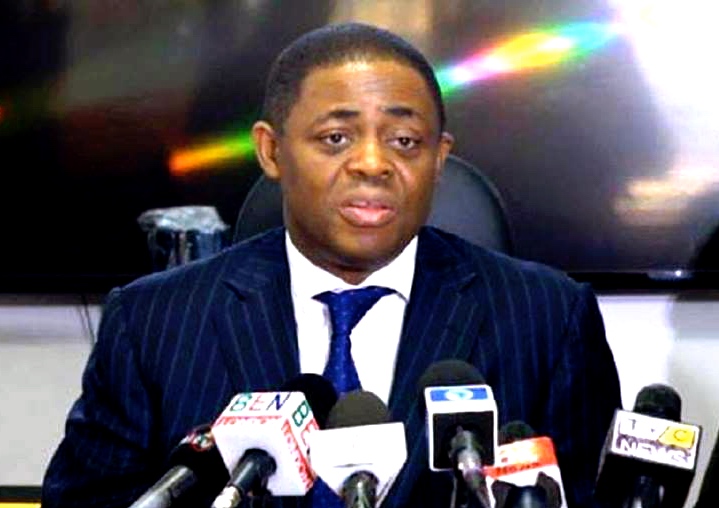 A former Minister of Aviation, Chief Femi Fani -Kayode has condemned the arrest of past National Security Adviser to former President Jonathan, Col. Sambo Dasuki; Colonel Kayode Are, the former DG of SSS during President Olusegun Obasanjo’s administration, Chairman, DAAR Communications Plc, Chief Raymond Dokpesi, among others, just as he vowed that such moves can never intimidate those in opposition.

Fani-Kayode who took a swipe at the President Muhammadu Buhari led government, described it as unforgiving, petty, unjust, vindictive in nature and above all, not God fearing, warning that if he continues the way he was presently going after those he perceived as his enemies and those who had worked with previous governments, especially Goodluck Jonathan, President Buhari runs the risk of provoking the wrath of God.

According to him, rather than terrorize the people of Nigeria, the President should save what he termed his terror waves and gestapo tactics for Boko Haram.

In a statement he made available to Journalists yesterday in Abuja, Chief Fani- Kayode said that President Muhammadu Buhari led government was playing a dangerous game of Russian roulette with a loaded gun, warning that if not properly handled and careful in the handling of the affairs of the country, the gun would soon explode

Fani – Kayode’s statement read in full: “I have just spoken to Colonel Kayode Are, the former D-G of SSS during President Olusegun Obasanjo’s administration and the former Acting National Security Adviser to President Goodluck Jonathan and I am deeply concerned. He told me that his house is under siege and that gunshots are being fired at him and his family as we were speaking.

“I am not sure what the issue is about but a situation where security men go to the home of a respected patriot like that and start shooting at him and his family for whatever reason is unacceptable and extremely dangerous. When you consider what is happening in Are’s home and marry with the shameful manner in which Colonel Sambo Dasuki, Chief Raymond Dokpesi, Governor Attahiru Bafawara, Alhaji Bashir Yuguda, Nnamdi Kanu, Godswill Orubebe, Bukola Saraki, Sule Lamido and others are being persecuted, threatened and demonised by the Federal Government it is clear that we are now in a police state in which law and order has broken down and in which anything can happen.

“The case of Dasuki was particularly bad. He was barricaded in his home against court orders and treated like an animal for three weeks. He was humiliated and subjected to mental and psychological torture for no just cause for that period of time even though the courts had told the SSS to let him travel out of the country for urgent medical attention. Instead of doing so after three tortuous weeks the SSS stormed his home, held everyone captive at gunpoint, grabbed him in front of his family, bundled him in a car and carried him to an unknown destination without any lawful authority or any arrest warrant.

“As far as I am concerned they are trying to kill him simply by denying him the right to see his doctors even though they know that he is very sick. If this were not the case then why are they indulging in all this dangerous and reckless drama. If they want to prosecute him that is fair enough but at least they should ensure that he stays well and that he remains alive and that they don’t kill him. You cannot prosecute a dead body and you cannot charge a man to court after he is dead.

“I saw Dasuki on various occasions before his arrest and I assure you that he really is very ill. What harm could have been done by allowing him to see his doctor as the courts ordered? Does he not have the right to live and get medical treatment? Is it not clear that there is more to this than meets the eye? Why are people remaining silent when this is a clear case of vendetta, vengeance, wickedness, injustice and a crude attempt to destroy, silence and kill an innocent man ? It is Dasuki today but it could be anyone else tomorrow.

“The truth is that the Buhari government is playing a dangerous game of Russian roulette with a loaded gun and if they are not careful it will soon explode. If they are not careful they will soon lose the confidence and trust of the people. They do not fear God. They are vindictive, petty, vicious, unforgiving and unjust and if they continue in this way apart from alienating the people they run the risk of provoking the wrath of God.

“If they have any evidence of wrongdoing on the part of Dasuki or anyone else then they should present it in court rather than on the pages of newspapers and if they wish to charge anyone they should go ahead and do so in a lawful, proper and civilized manner. The era of witchhunting and demonising people and attempting to cower and subdue them into silence are long over.

“Those of us that oppose this government can never be intimidated or silenced because God is with us. If we could stand up against military dictatorship in the past, we can stand up against civilian dictatorship today. Anything outside of prosecuting people in a lawful manner and according to due process is barbaric and unacceptable and our President needs to be reminded that he is not running a military government but a democratic one.

“This attempt to silence us with guns, bullets, threats of arrest and prosecution, violence, storming of homes, locking up of relatives, kidnapping of citizens, shameful lies, baseless allegations, demonisation in the media and disinformation will not work. They do not have enough prisons to silence the voice of the Nigerian people or to break their spirit and no-one is intimidated by the governments evil tactics and wicked ways. My message to President Buhari is simple and clear: stop terrorizing your own people and save your terror waves and gestapo tactics for Boko Haram.”

In this article:Femi Fani-Kayode, Kayode Are, Muhammadu Buhari, Sambo Dasuki