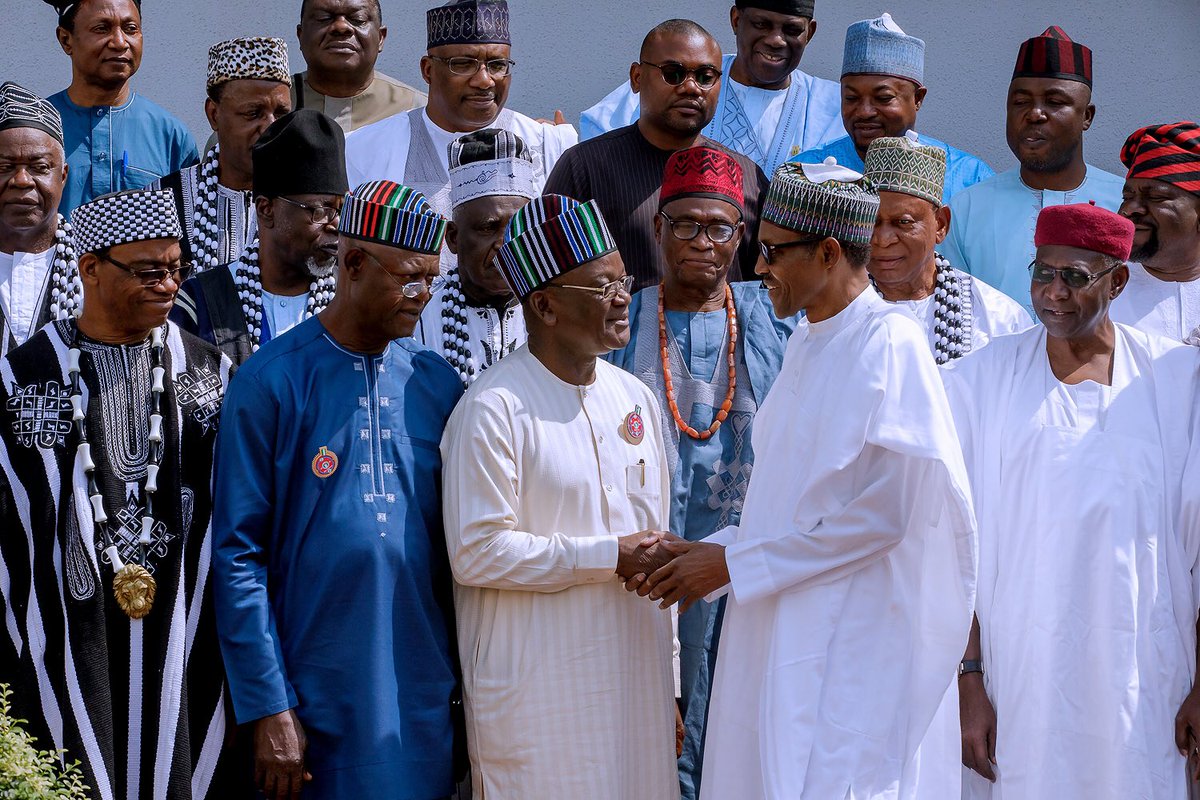 Benue leaders led by Governor Samuel Ortom yesterday declared that their state had no empty land to be designated as a cattle colony as being proposed by the Federal Government.

They made the declaration at a meeting with President Muhammadu Buhari in the Presidential Villa, Abuja on the recent violent attacks on communities in Benue State by suspected Fulani gunmen.

Ortom, who addressed State House correspondents after the meeting said: “‎I do not understand what colonies mean. Today, I was privileged to meet the Minister of Agriculture, Audu Ogbeh, and he explained to me that a colony is many ranches put in one place, restricted in one place. For us in Benue State, we have no 10,000 hectares to be allowed for that kind of a thing to take place.

“Other states have the land but we in Benue State don’t have and that was what led us to enacting this law.”

The governor insisted on the arrest of the leadership of Miyetti Allah Kautal Hore for the alleged inciting statement which caused the massacre of innocent residents of Guma and Logo local governments of Benue State.

“When people violate the law and they are not sanctioned it becomes a problem. These people should be arrested and investigated because there is enough evidence against them.”

Ortom, who noted that “even before the anti-grazing law, killings were taking place more than what we are witnessing today” said the state government had found a solution in the new law to protect all.

“We are not sending anyone away from Benue State. The herdsmen, whether you are Igbo, Fulani, Hausa, Idoma or Tiv, you are free. Just follow the law, obtain permit and then do the ranch and you are protected,” he said.

The governor denied allegations that the state was arming militia groups, describing the development as a distraction from the main issues.

He said that as far back as 2015 when he took over as governor, he organised an amnesty programme which achieved the disarmament of over 800 youths.

At the meeting, President Buhari appealed to the government and people of Benue to exercise restraint, assuring that all the perpetrators of violence in the state would be made to face the wrath of the law.

He commiserated with the victims of the attacks and promised that the government would ameliorate their suffering. He said relevant agencies had been directed to cater for their needs.

“I appeal to Governor Ortom to restrain his people. I assure you that the police, the Department of State Service and other security agencies had been directed to ensure that all those behind the mayhem get punished.

“I ask you in the name of God to accommodate your country men. You can also be assured that I am just as worried, and concerned with the situation,” the president said.

According to Buhari, the Inspector General of Police has been directed to relocate to the state to provide security for lives and property. He urged all Benue indigenes to trust the security agencies and report all suspicious cases of movements in the state.

Meanwhile, the President Buhari’s meeting with the Benue leaders has been described as belated. Some stakeholders in the country said Buhari had recanted his oath of office to provide security for Nigerians in the time of trouble.

The National Chairman, National Conscience Party (NCP), Dr. Yusuf Tanko, said the venue of the meeting was a sign of disrespect for the souls of the victims of the killings. He said the meeting should have been held at the scene where the victims were killed to show that Buhari valued their lives.

He also flayed the president’s prolonged silence on the matter, wondering what would have happened if there was no serious outcry against the government’s nonchalant attitude on the matter.

“When the same President was looking for votes in 2015, he traversed the entire country to campaign, assured the people he would provide good leadership, good economy and security but now that the same people are in anguish what stops him from visiting them? Why must he summon the leaders of Benue to Abuja first? Does that mean the people of Benue, whom he promised to protect while he was seeking their votes, are no longer important to him or that it was only their votes he wanted and nothing more?”

The Yoruba socio-cultural group, Afenifere said the Benue leaders ought not to have honoured Buhari’s invitation to Abuja. The spokesman, Mr. Yinka Odumakin, said Buhari should have at least travelled to Benue to commiserate with the victims.

According to him, the president only succumbed to pressure, not that he is really convinced on the need to meet the people concerned.

The National Chairman of African Democratic Congress (ADC), Chief Ralph Nwosu, said the meeting was a serious sign of collapse in governance. “When we said Nigeria is a failed state, many people didn’t take us seriously but the signs are now manifesting.

“Now that Nigerians have tasted what Buhari has to offer, the onus is on us to use our votes to decide whether he should continue or not in the next election. I believe if there is going to be a free, fair and credible election, Nigerians would vote him out.”

But the President of Arewa Youths Consultative Forum (AYCF), Alhaji Shetima Yerima, said it was better late than never for Buhari to have met with the Benue leaders. He, however, condemned the administration’s lackadaisical attitude to the crisis when it started.