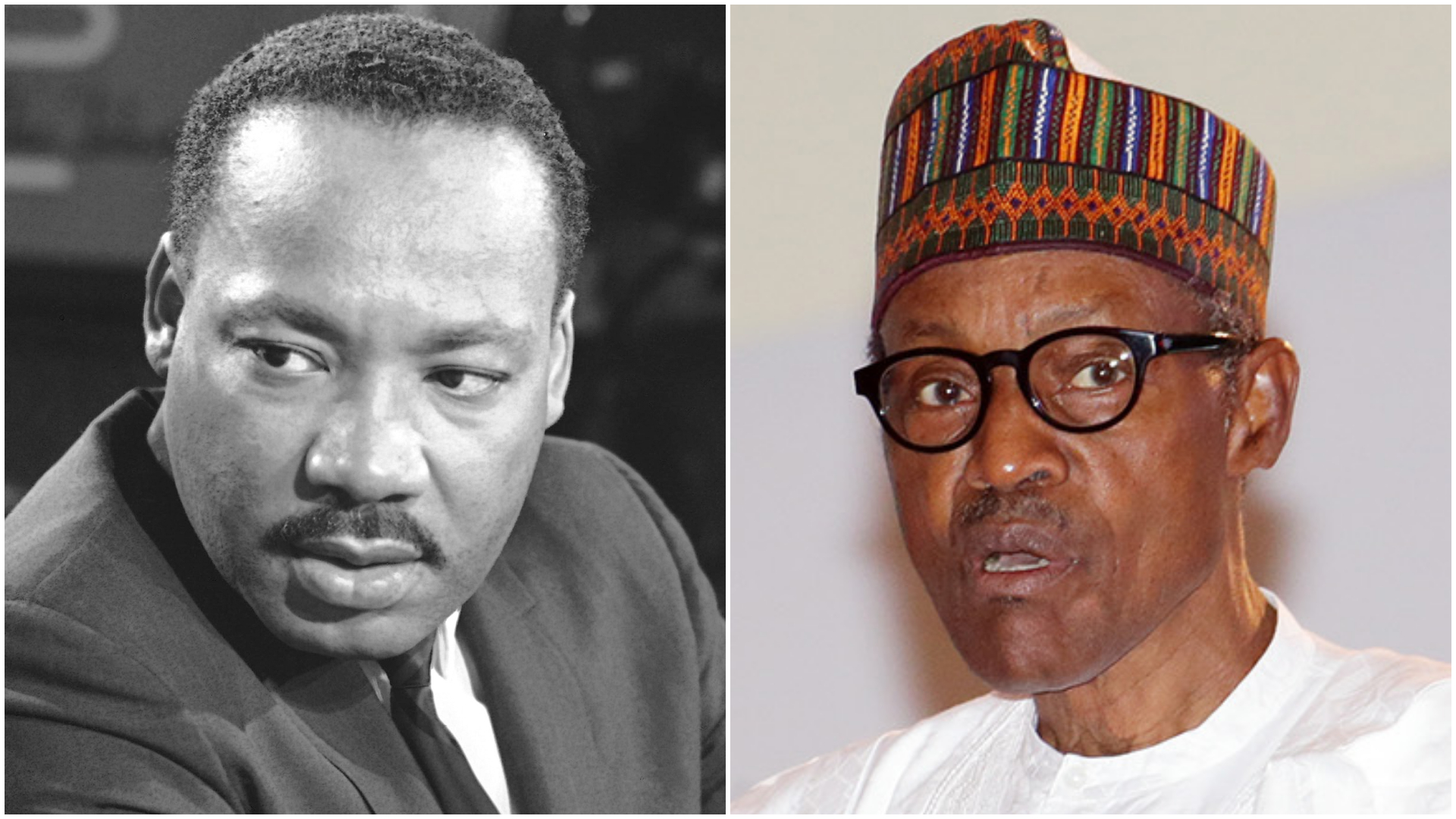 Public commentators and thousands of Nigerians have taken to the Nigerian social media, condemning the roles allegedly played by some presidential aides in the controversial award for President Muhammadu Buhari by the Martin Luther King Center a few days ago.

Pictures of the delegation from the centre, The King Center, presenting the award on behalf of the family of legendary American civil rights activist, Martin Luther King Jnr to Buhari at the Presidential villa, found their way into the Nigerian media hours after the visit.

State House officials, including Bashir Ahmed, a new media aide to the president, claimed the award was given by the late civil rights activist’s nephew.

The nephew, identified as one Isaac Newton-Farris also reportedly urged Nigerians to allow President Buhari continue in office because of his tremendous achievement.

But following a tweet from Mr. Ohimai Godwin Amaize, via his Twitter handle @MrFixNigeria, amid a firestorm of other Twitter users who were condemning the King family for giving President Buhari the award, the King Centre, which is a memorial of the late preacher, distanced itself from the award.

This is not good for the legacy of MLK… SAD. @BerniceKing @TheKingCenter https://t.co/4NRigwfAz3

The award given to President Buhari of Nigeria was not given by The King Center, at the request of The King Center or by the children of #MLK and #CorettaScottKing. @MrFixNigeria

The development has since ignited a series of condemnation from members of the Nigerian public both at home and abroad. See some tweets:

First came the Dapchi scam.Then came the Martin Luther King award scam.And now comes the bus terminal scam in which Lagos,the largest city in Africa,is under lockdown and all roads blocked simply because Pres. Muhammadu Buhari is coming to open a BUS TERMINAL! God save Nigeria.

The Martin Luther King Jnr award to Buhari yesterday is fake. The king Family has distanced themselves from the award.
Buhari has once again been scammed. Abike DABIRI smiling to the Bank with her loot!????????????

Why using the name of Martin Luther King to lie?
But I’m not surprised. Nigerians should remember how they lied that
Buhari had an interview with the CEO,All Eyes on Africa TV Show, Kemi Fadojutimi in UK on Feb 20, 2015, whereas,the interview was held in Transcorp Hotel, Abuja pic.twitter.com/aB4FmUNnbx

Thank God @TheKingCenter denied that they gave an award to Buhari or asked Nigerians to reelect him. I was wondering how Martin Luther King‘s family will visit Nigeria to give an award to a tyrant! Their father had a dream and they came to Nigeria to associate with a nightmare?

That imbecile Lauretta even said the woman was MLK’s wife…dem don lie so tey their lies no dey ever make sense. Morons

I’ve seen a lot of reactions to @TheKingCenter’s tweet

I’m shocked that many of us DON’T know the late Coretta was the wife of Martin Luther King Jr. They had 4 children. Coretta set up TKC in 1968.

Question: Were any of MLK’s children, grandchildren at the Buhari presentation? pic.twitter.com/ZkUI3AAK85

Even GEJ didn’t plunge this depths. All I gave Buhari in 2015 was my vote. I didn’t give him my ability to see a shams from miles away.

So some Yahoo Yahoo aides in the Buhari administration decided to scam our President with a Fake Martin Luther King award?

Funny how EFCC will be running around chasing boys with laptops in Ibadan when the “dons” are in Aso Rock.

Buhari is a big big fraud. Just as he is fraud call Jibril Aminu ruling Nigeria so he want to fraud himself to obtain #MLK award. Again clone Buhari is not a Nigerian. Know it now, he was not born in Nigeria and has no lineage. He is a fraud. Take it or leave it. https://t.co/Uu5l9558Og

This is what being a buhari apologist turns you into, a quivering mass of idiocy.

Who ever believes Buhari was scammed ought to be awarded “MLK Mumu of the Century”. It took me 3mins to find out the so called MATRIARCH of the King family was AD’s wife who runs AD King foundation.
You mean I have more resources than a sitting president ?
He is just corrupt