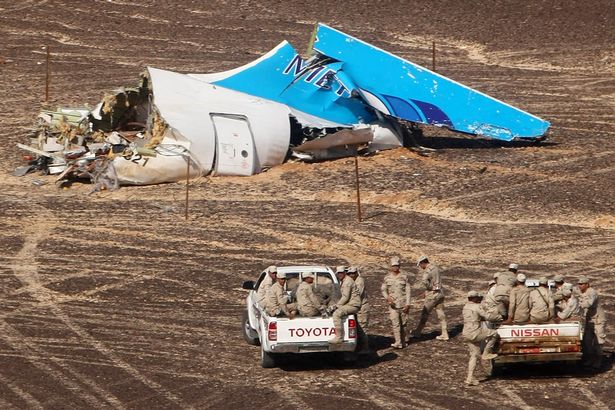 Evidence suggests a Russian jet that crashed over Egypt’s Sinai desert may have been brought down by a bomb, the British government said Wednesday, suspending flights to and from the Sinai Peninsula as a precaution.

Prime Minister David Cameron’s office said British aviation experts were traveling to the Sinai tourist resort of Sharm el-Sheikh, where the flight that crashed Saturday originated, to assess security before British flights there would be allowed to leave.

No British flights were flying to the resort on Wednesday, but several were scheduled to depart.

Cameron’s Downing St. office said in a statement that it could not say “categorically” why the Russian jet had crashed.

“But as more information has come to light, we have become concerned that the plane may well have been brought down by an explosive device,” it said.

In a statement Wednesday, the Irish Aviation Authority urged airlines not to fly to or from Sharm el-Sheikh Airport or in the Sinai Peninsula “until further notice.”

It said an update will be issued when more information becomes available.

The British government’s crisis committee was meeting Wednesday to review the situation. Downing St. said Cameron had discussed the issue of security at the Sharm el-Sheikh airport with Egyptian President Abdel-Fattah el-Sissi, who flew to Britain on Wednesday for an official visit.

El-Sissi insisted Tuesday that the security situation in the Sinai Peninsula was under “full control” and that claims by the Islamic State of Iraq and Syria, or ISIS, that it downed the plane were “propaganda” aimed at damaging Egypt’s image.

British Transport Secretary Patrick McLoughlin said the British experts would “ensure the right security measures are in place for flights.”

“It is when that review is completed that we will allow the flights that are there tonight to depart,” he said.

The Metrojet Airbus A321-200 carrying mostly Russian vacationers from Sharm el-Sheikh back to Russia’s second-largest city of St. Petersburg crashed over the Sinai early Saturday, killing all 224 people on board.

Russian officials say the plane broke up in the air 23 minutes after takeoff after reaching an altitude of 31,000 feet.

Also Wednesday, the Egyptian government said that the cockpit voice recorder recovered from the plane was partially damaged.

In this article:Bomb, ISIS, Russia, UK