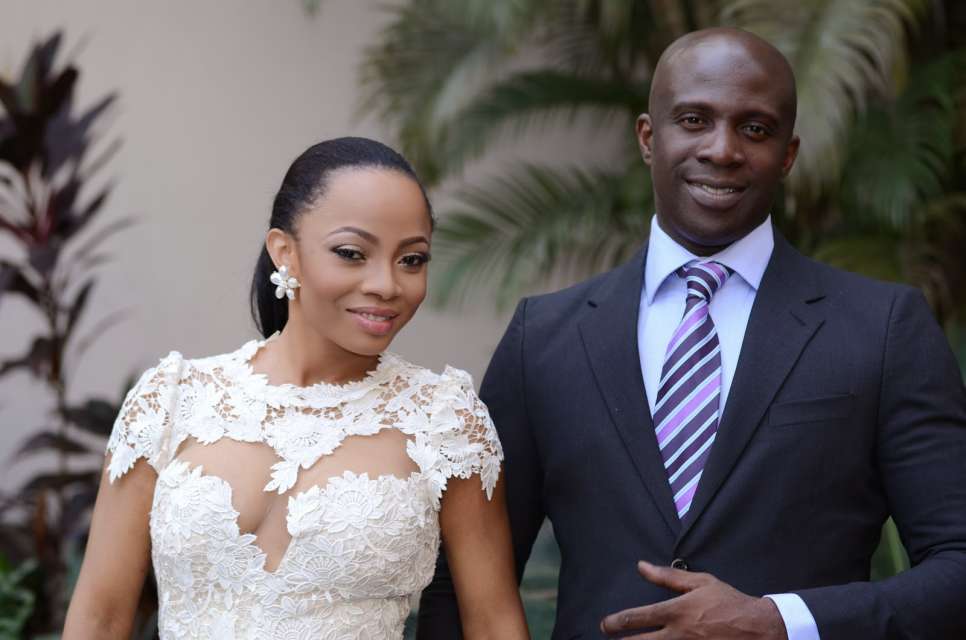 Fitness coach, Maje Ayida, has asked his ex-wife, Toke Makinwa, to stop the sale and promotion of her tell-all memoir, On Becoming, which detailed the topsy-turvy relationship between the two, The Cable reports.

Mr. Ayida made the request via a “letter of demand,” from his lawyers.

The letter was allegedly sent last year, but it was not clear if Ms. Makinwa acknowledged receiving it. Both Mr. Ayida and Ms. Makinwa were yet to reply emails seeking clarification on the letter.

The media personality had launched the book at a star-studded event last November in Lagos.

Peeved by her portrayal of him in the book, Mr. Ayida has hired law firms in the U.K and Nigeria in to stop the circulation of the book.

His counsel are Carter-Ruck, a UK law firm that also represents top figures like Simon Cowell, Elton John and Chelsea FC; and Kemi Pinheiro of Pinheiro LP who is heading the legal front in Nigeria.

According to reports, Mr. Ayida had “requested legal separation” from Ms. Makinwa “within 6 months” of their marriage in January 2014 “when it became clear that the marriage was breaking down”.

Ms. Makinwa was also alleged to have signed a legal separation agreement in July 2014. The letter said it was well-documented that the couple had agreed to separate by July 2014, which the book failed to record.

In the book, Ms. Makinwa accused her former husband of giving her STDs, being a serial cheat and committing adultery.

But the legal documents described the book as nothing but “exaggerated fabrication” and containing “defamatory words”.

The Nigerian counsel of Mr. Ayida, Pinheiro LP said it was untrue that he gave her a sexually transmitted infection as alleged in the book. The law firm said the publication had brought “public ridicule” on Mr. Ayida, stressing that her representation of him in the book was “not a true reflection of who he is.”

Mr. Ayida, therefore, asked Ms. Makinwa to retrieve the already-sold books, stop all forms of distribution and deliver same at a place to be agreed upon by him for destruction.

He said her failure to do so and tender a full page unreserved apology to Ayida in three national dailies “will result in the commencement of legal action.”

He gave her 7 days upon receipt of the letter to comply with the demands or he would “be forced to seek legal redress.”

Meanwhile Ms. Makinwa, who is currently in Ghana on a media tour, is yet to react to her ex-husband’s allegations.

Indeed on her Instagram account, the ‘bestseller’ author was seen having a fun time in Ghana and enjoying the attention that has greeted her new found fame.

The book, On Becoming, was launched at a star-studded event in November 2016. The event was attended by her celebrity friends, including Stephanie Coker, Arese Ugwu, Annie Idibia, Mo Abudu, Abike Dabiri, 2Baba, Lola OJ and Lilian Afegbai. Others at the event include Kaylah Oniwo, Simi, Jeremiah Ogbodo, D’Banj, and Bolanle Olukanni.

In the book, she spilled never-heard-before details of her 18-month marriage to the fitness coach, which crashed like a pack of cards in July 2015.

The book also detailed what transpired in the love triangle among herself, her estranged husband and Anita Solomon, who was alleged to be responsible for the crash of the union. Ms. Solomon is a lawyer, mediator and Internet business coach.

Ms. Makinwa and Mr. Ayida had wedded at a private registry in Lagos in 2014.