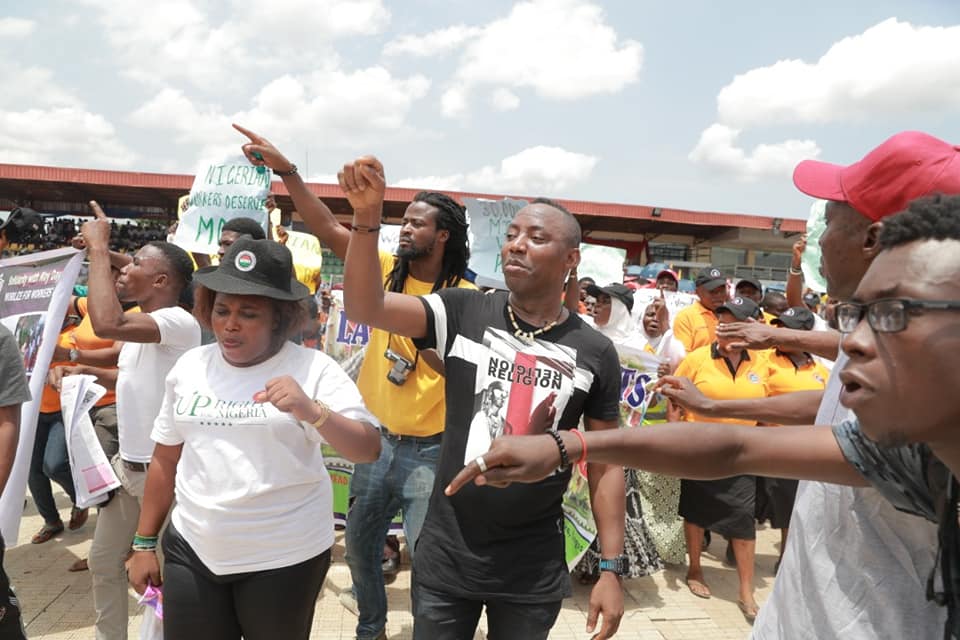 Nigerians have taken to the social media to demand for the release of the presidential candidate of the African Action Congress (AAC) in the last general election, Omoyele Sowore.

The hashtag #FreeSowore has been trending on Twitter Nigeria, since the news of his arrest broke.

Sowore, who is also an activist and publisher of SaharaReporters was arrested by operatives of the Department of State Services (DSS) at his Lagos home in the early hours of Saturday.

The National Legal Adviser of the  African Action Congress, Mr. Inibehe Effiong said that Sowore was arrested for planning a protest.

WHILE YOU WERE ASLEEP: Sowore, Convener of #RevolutionNow arrested by DSS but government negotiates with Killer Herdsmen, Boko Haram & bandits in Sokoto. They even said Boko Haram members can become president soon. pic.twitter.com/GzD4ZNW4eR

All well-meaning Nigerians should stand with @YeleSowore and defend his constitutional right and freedom to protest any matter of Governance that worries him.

I just got onto Twitter and i see#FreeSowore trending. As in this administration is so daft that it actually arrested Yele Sowore for organizing a protest #RevolutionNow !
When the person that should be arrested is Muhammadu Buhari @MBuhari for overseeing the deaths of Nigerians

If we protest, they’d kill us on the the streets then tag us “Terrorist group”.

If we speak up, they’d suspend our accounts then come to our houses in the thick of the night to carry us to unknown destinations.

If we keep quiet, they’d use hunger to kill us all.#FreeSowore pic.twitter.com/HH0rE2qLBf

Fulani tyranny & primitive dictatorship will never win this war against the massed ranks of oppressed people in Nigeria. Suppressing the right to protest in a so-called democracy will only hasten the collapse of that ZOO.#FreeSowore & allow the #RevolutionNow right to protest. pic.twitter.com/ZzjrSWosY7

Dear @MBuhari
We didn’t vote for you to be arresting innocent citizens and be endorsing Terrorist and blood sucking herdsman.
You can’t continue to oppress us when we have all the necessary things to make this country a better place,Resign now or #FreeSowore
Signed. pic.twitter.com/KRmEvnnP0y

First they came for @Dadiyata, and I didn’t speak out — because I didn’t always agree with Dadiyata.

I know this will eventually happen. Finally Buhari has given #RevolutionNow a reason to emerge.

This is their greatest fear — PROTEST.

Buhari has made his greatest error in history. He should go and ask Bashir of Sudan. #FreeSowore #FreeDadiyata pic.twitter.com/mUmbubKLks

They negotiate with mass murderers

They grant amnesty to terrorists

They have in their ranks divisive politicians, peddlers of hate speech

Nothing could be more daft! Of all the actions to take against a constitutionally and legally backed protest, the last should be an arrest of the convener. #FreeSowore

The Chief Judge of Akwa Ibom, Ekaette Obot has finally furnished human rights lawyer, Inibehe Effiong with a copy of the judgement committing him...